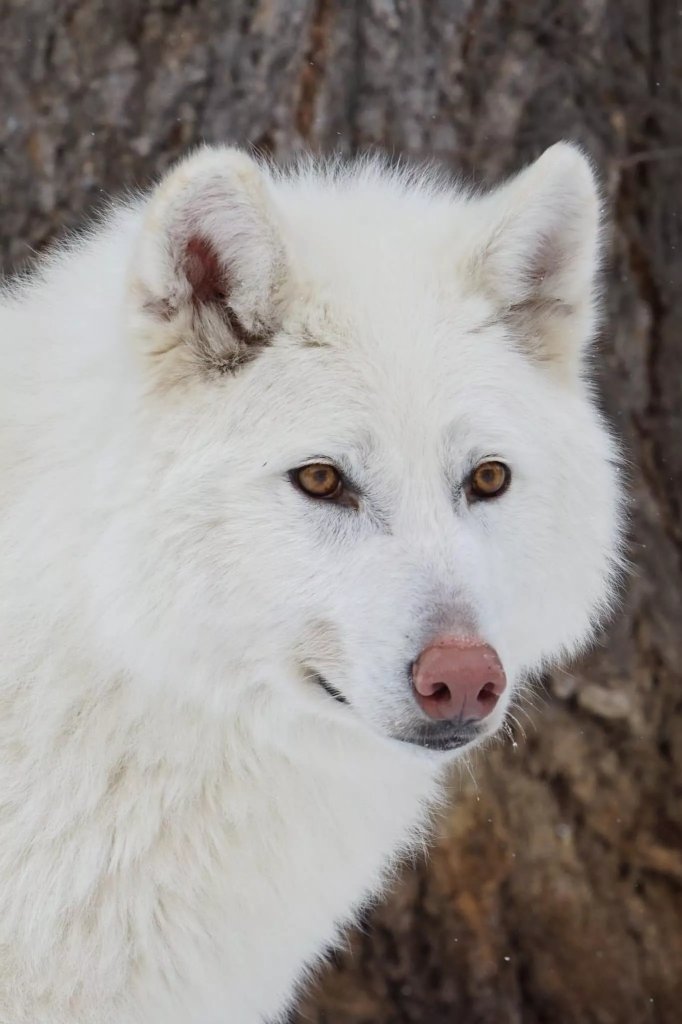 Zoey was a one-year-old female wolf dog living in a small kennel with fourteen other wolf dogs at a commercial fox fur farm in Illinois. The animals were malnourished and living in filthy conditions. Their food consisted of an inadequate amount of kibble thrown on the ground amidst feces and urine. The water bowls were filthy or empty. The animals did not receive any medical care, socialization, or human contact, and they were terrified. When the facility failed to renew its USDA license, all of the animals were confiscated by the Illinois Department of Natural Resources, and the search for appropriate placement began. After three months of looking for placements, seven animals had been placed. Time was running out for the remaining eight wolf dogs, and euthanasia was the last remaining option. In May 2015, when word of their plight reached the rescue community, W.O.L.F. and several other sanctuaries collaborated to help all of the wolf dogs get to safety. W.O.L.F. staff drove to Illinois to transport Zoey home. She was initially terrified at being separated from her three sisters, with whom she had shared a small enclosure since birth. Zoey was nervous but subdued during the long drive to Colorado, and she would not eat or drink anything.

W.O.L.F.’s veterinarians examined Zoey before she arrived at the Sanctuary. She had parasites and was too anemic to be spayed. She received medical treatment for the parasites, and when her quarantine concluded, she was placed with another Sanctuary wolf dog named Pax. Zoey began to flourish, and her personality began to emerge. She loved to steal things including gloves, shovels, and anything else that was not nailed down in her enclosure. She was proud of her skills as a thief, and she even started to “steal” treats from the hands of her caregivers.

Unfortunately, the relationship between the Pax and Zoey did not develop as W.O.L.F. staff had hoped. Zoey loved to play, but Pax was not interested in acting like a good playmate. He constantly followed Zoey at close range and always rudely sniffed her back end. She did not appreciate his annoying attention and began to try to avoid him. Her natural exuberance was disappearing. Staff made the decision to remove Pax and introduce Zoey to Loki, who was very lonely since his companion Frackette passed away. The staff was nervous about the first meeting between Zoey and Loki, but it went beautifully. The two wolves were soon great companions. They played incessantly and raced up and down the mountain in their huge enclosure. They were often seen together, waiting to race along the front fence with any staff or volunteers who happened by. Loki and Zoey were perfectly suited to one another.

Devastatingly, Loki passed away very suddenly in January 2021 when a hemangiosarcoma on his heart ruptured. Along with their caretakers, Zoey mourned the loss of her beloved companion. We gave her the time she needed to grieve while we looked for another companion. We knew that she would need a younger, high-content male wolf dog with a lot of energy and Iver fit the bill. The two were slowly introduced and while they didn’t immediately start playing, we knew they would make progress towards friendship. Caretakers occasionally see Zoey and Iver playing in their mountain habitat and know that their bond will continue to grow with time.