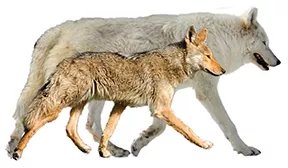 This page offers tools to assist with identification as well as provide general information about these species. 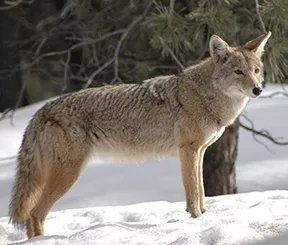 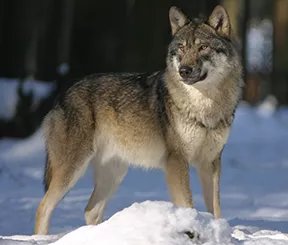 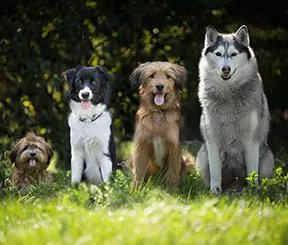 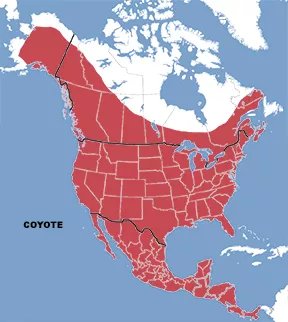 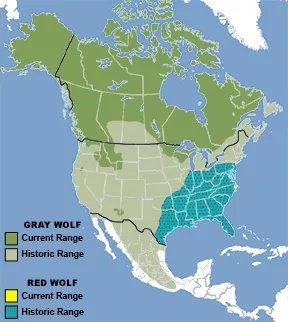 Originally, gray wolves were found all throughout North America. However, due to habitat loss and human-wolf conflict, their habitat has been significantly reduced. Currently, in North America, the gray wolf is only found in Canada, Alaska, and isolated areas in the continental United States. 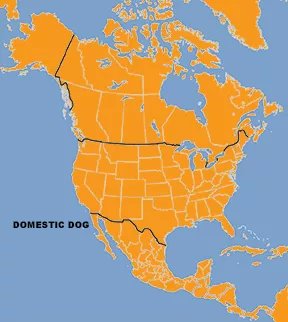 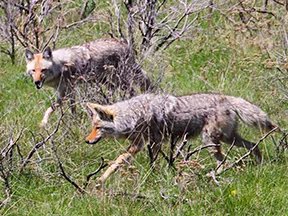 Coyotes are generally less social than wolves and are equally comfortable living solo or as part of a group. If coyotes are living together, they typically develop loosely-formed packs that are usually made up of two to four adults and their pups, with a breeding pair being the most common type of social pairing. Similar to wolves, packs are often closely related family units made up of parents and their offspring. While packs will hunt and travel together, pack members are also likely do these activities separately. Many times when coyotes are spotted, the coyote is alone, which has caused the misconception that coyotes are only solitary animals. 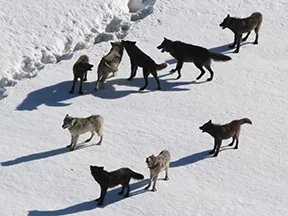 Gray wolves are highly cooperative, social animals. They form groups called packs that average six to nine individuals. The pack is generally composed of a breeding pair and their offspring. Contrary to popular culture, wild wolf packs do not have a social structure governed by a conflict-based dominance hierarchy. Instead, wolf packs are generally family groups and social interactions are structured along the lines of parent/offspring relationships, with the breeding pair (i.e. the parents) being the ones to take on leadership roles. Often, the dominant female makes more decisions for the pack as a whole, while the dominant male protects the pack. The pack will hunt, eat, defend territories, raise young, and travel together. 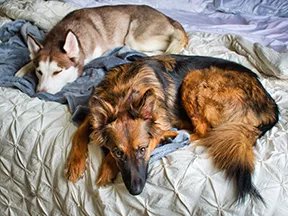 Domestic dogs are social animals and, like coyotes, are comfortable living solo or as part of a group. Unlike wolves or coyotes, dogs are generally better at accepting different species (such as humans) into their social groups. When living in packs, dogs have a conflict-avoidance based social structure which lends itself to a more ridged social hierarchy than seen in wolves. Generally, there is one leader, and the other dogs are ranked linearly below that individual. Pet dogs (unless they have a high prey drive), do not hunt together since they are typically fed by their owners and have no need to hunt or travel. Feral dog packs are primarily scavengers and tend to look for food individually. They also usually do not share their food with others in the pack. 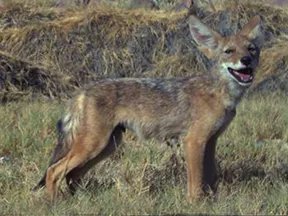 Both male and female coyotes are only fertile during breeding season, which is from January to March. Though courtship may occur over a period of weeks, female coyotes are only receptive for two to five days during this time. Litter sizes have a huge range from one to nineteen pups depending on environmental factors such as population density and food abundance. Therefore, the smaller the coyote population or the more hospitable the ecosystem is that year, the more pups will be born per litter. Once born, parental care is provided by both the male and female. 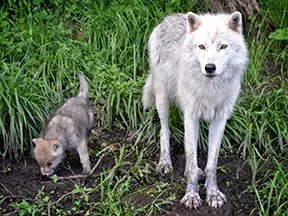 Both male and female gray wolves are only fertile during breeding season, which happens once per year from January to April, depending on the latitude. During this time, usually just the dominant pair mates, though during times when resources are abundant, there have been some reports of more than one female in a pack giving birth. The pups are born in dens dug by the pack, and there can be as few as one to as many as eleven pups in a litter. Taking care of the pups is a pack effort in which all members contribute to raising the pups. 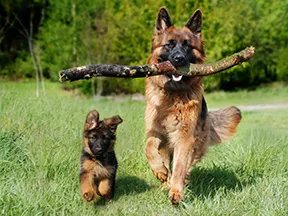 Domestic dogs are capable of breeding at any time of the year, with females typically coming into heat approximately every six months after reaching sexual maturity. Males are always fertile after sexual maturity and are capable of siring offspring year-round. Feral domestic dogs have similar mating behaviors to gray wolves. Generally, only the dominant pair will mate, and raising the pups is a pack effort. In pet domestic dogs, breeding is often controlled by the owners, and care of the pups is usually limited to the female dog and humans. 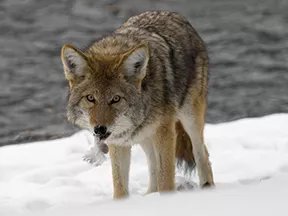 Coyotes are omnivores and opportunistic scavengers. Often, their primary food sources will vary based on seasonal availability and can include fruits, nuts, insects, and meat. Coyotes will hunt either alone or in pairs, and because of their smaller size, their primary prey tends to be rodents and other small mammals. However, Coyotes have been known to hunt larger ungulates such as deer as well as kill livestock. It is estimated that over two-thirds of lambs lost to depredation are attributed to coyotes (https://theconversation.com). 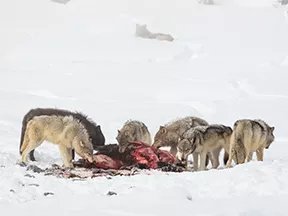 Gray wolves are primarily carnivorous, meaning they must eat meat but can also eat some vegetation. Wolves most often hunt in packs; therefore, they can take down larger animals such as moose and elk. However, wolves will go after smaller prey such as rodents and have even been observed hunting for fish in rivers and along coastlines. While wolves prefer to hunt ungulates, they have been known to kill livestock. However, the number of livestock losses due to wolf depredation is drastically overestimated. In fact, wolves are only responsible for 0.02% of the total annual unwanted losses in the cattle industry. 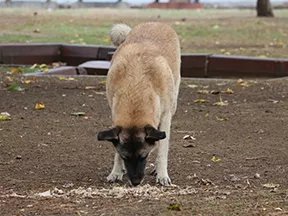 Dogs are omnivores and are primarily scavengers with a wide range of food habits. Feral domestic dogs will hunt both small and large animals, including livestock, and will often scavenge off of road kill or from garbage dump sites. Pet domestic dog diets vary drastically upon multiple factors such as the particular dog breed as well as the preferences of the owner. However, it is not recommended that dogs only consume raw meat, as they should get a source of calcium and iron from elsewhere.

Coyotes are not endangered and are considered a nuisance species in some places. In some areas of the United States, there are efforts to decrease coyote populations through hunting and coyote killing competitions.

In October 2020, Gray wolves were removed from the Endangered Species Act and are no longer considered endangered despite the fact that wolves populations have recovered less than 10% of their historic range. However, in some areas of the United States, there are efforts to help recover and reintroduce wolf populations.

Domestic dogs are not threatened. In fact, feral domestic dogs have caused millions of dollars of damage in the United States, which has prompted efforts to decrease the population of feral dogs.