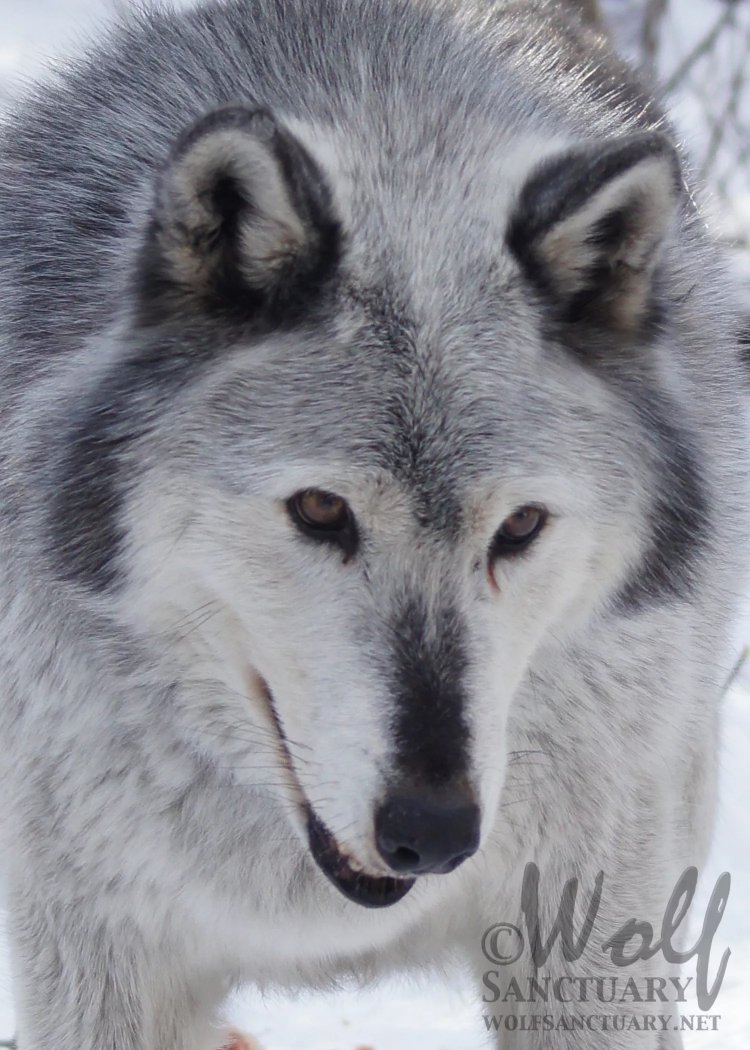 Female
Born: April 27, 2002
Rescued From: Arizona
Second Chance: May 23, 2002
Returned to Spirit: May 25, 2013
Tunyan was a beautiful, black Mackenzie Valley wolf mix born on April 27, 2002, the first of an unplanned litter of five. She was taken away from her mother at ten days of age, something commonly done by breeders so that the young, when their eyes first open, will imprint on humans instead of their biological parents. Tunyan opened her eyes two days later and immediately began learning how to stand and walk. Five days later, she was wrestling with her siblings and stalking her toys. Only some of the pups were kept by the breeder, and Tunyan came to live at W.O.L.F.

We flew to Phoenix on May 21, 2002 to pick her up and returned with a precious carry-on package that squirmed. The pup weighed five pounds, had deep blue eyes, and typical of a wolf pup, she was a holy terror. Because she was so small and required bottle feeding, she needed to stay in a confined area on the deck. At this time the pup still did not have a name, but after we got to know her, it was decided that her name would be Tunyan, which is Lakota for brat!

Approximately six weeks after she arrived, Tunyan became ill. She was very lethargic and stopped eating. After a full day of testing, it was determined that she was suffering from iron deficiency anemia. Tunyan was rushed to the hospital and, over the next two days, received two blood transfusions and injections of iron. It was never determined exactly what caused the deficiency.

Tunyan had originally come to the Sanctuary to be part of Spirit and Indigo’s pack, but now it was apparent that she couldn’t be placed with them as it was imperative for her treatment and recuperation that she be kept where she could be monitored closely. As she regained her health, Tunyan bonded with the animals living close to the cabin – most notably Kasha and Shaman. Once again, she began eating like a wolf, steadily gaining weight and growing like a weed. There was no doubt that she had an alpha personality and knew exactly how to use it. As the trio bonded more, volunteers began calling them “The Brat Pack.”

Tunyan developed into a magnificent alpha female and eventually chose Kasha as her lifetime mate. Although very possessive of her enclosure mate, Tunyan was still extremely social with humans and enjoyed meeting new volunteers.

Kasha was diagnosed with kidney problems in the summer of 2007 and became very ill in February of 2008. He, unfortunately, did not survive the illness, which left Tunyan alone for the first time. We made sure she received lots of extra attention and goodies from the humans while everyone grieved the loss of Kasha.

Just days before Kasha’s passing, we had accepted a young male named Sigmund as a companion for Shaman and Isabeau. The pack introductions had not been going well, and it became apparent that Sigmund was not welcome in Shaman’s pack. Sigmund was staying in the front run while we decided where to place him, when Tunyan showed an interest in playing with him at the fence. We decided to try putting them together, and the two immediately hit it off. They began playing so fast and furiously that Tunyan was exhausted in ten minutes. Although Tunyan was fifty pounds heavier than Sigmund, there was no doubt Sigmund was the boss. Tunyan adored him, and they remained together, happy and healthy, and a favorite of all fortunate enough to meet them.

In May of 2013, Tunyan became very lethargic and showed no interest in food. The vet advised us to monitor her condition and call back the next day. Unfortunately, there was no next day for Tunyan as she passed away unexpectedly during the night of May 25th, 2013. A necropsy indicated that a tumor on her spleen had ruptured.