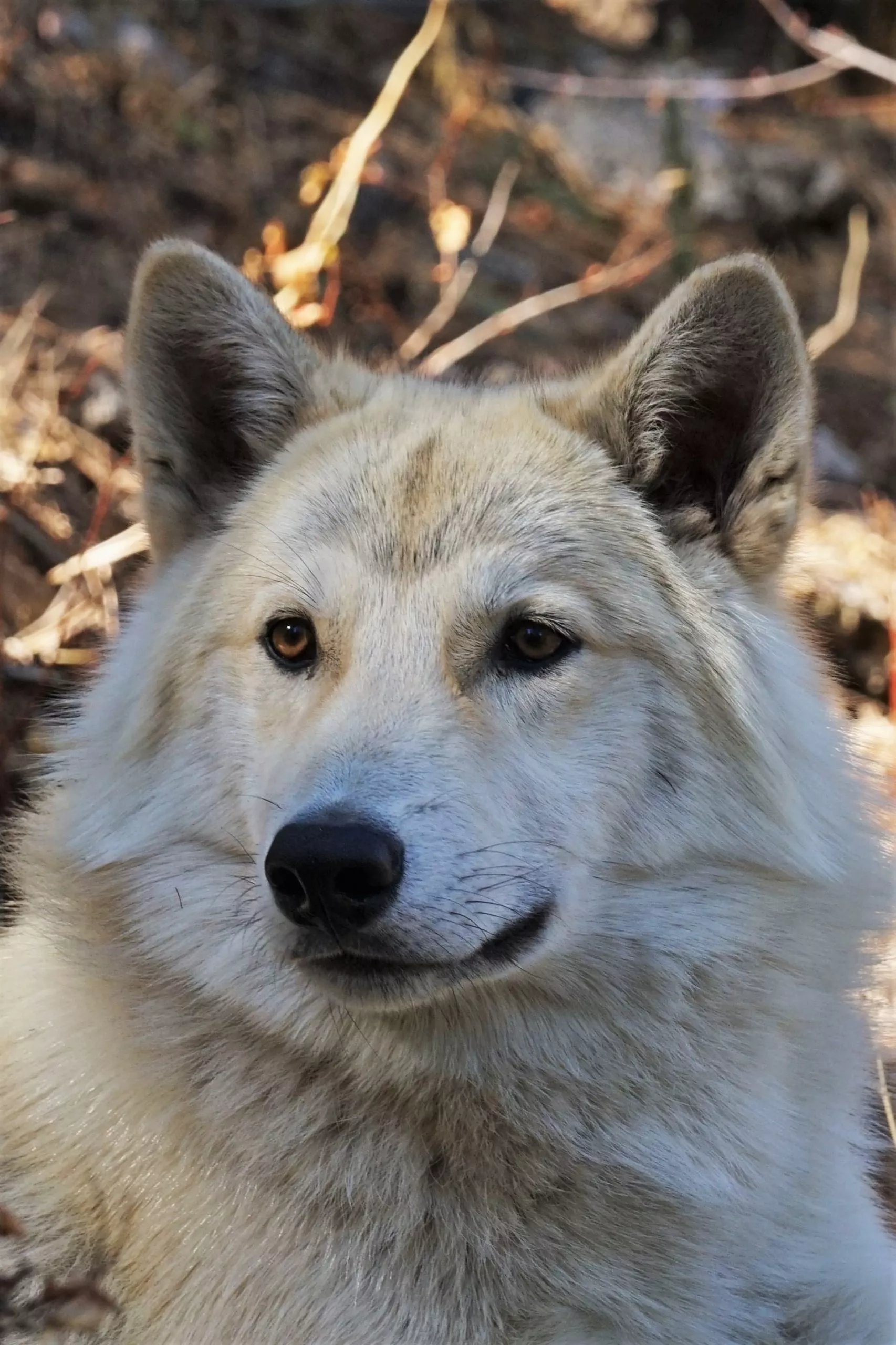 W.O.L.F. first heard about Topaz, originally called Yoti because the shelter staff thought he looked like a coyote, when a shelter in Oregon called the Sanctuary to ask for help. They had a stray animal they believed was a wolf dog. He was clearly a youngster, but he had behaviors that shelter staff thought were aggressive. He was incredibly “mouthy and nippy.” When he first walked into the shelter, he grabbed a bag of cat food and attempted to eat it, bag and all. He excitedly nipped at the hands of staff whenever they tried to feed him, and they needed to wear thick gloves and have two people handle him on leashes to protect themselves. His “stray hold” was nearly up, and they did not have any place for him to go and could not adopt him to a member of the public because of his breed and perceived aggression. The fate of the wolf dog pup was most likely euthanasia.

W.O.L.F.’s Director of Animal Care took the phone call from the shelter and explained the nutritional needs of a young wolf dog and some strategies for dealing with his nippy behavior. Luckily, the shelter staff were more than willing to make adjustments to his care and were able to get Topaz to a place where they felt they could keep him safe while searching for an appropriate placement. With a recent vacancy opening at W.O.L.F. due to the passing of beloved Nashoba, the Animal Care Director and W.O.L.F.’s Rescue Coordinator consulted with W.O.L.F.’s Executive Director, and it was confirmed Topaz would have a new home at the Sanctuary.

Over the next week, Topaz’s story was revealed. The mid-content wolf dog was born in March 2021 at the residence of an east coast breeder. Topaz was sold to a couple on the West Coast who adored him. When they both were diagnosed with sudden and very serious medical problems, they were forced to give up the pup to another individual who they thought would take good care of him. The new owner only had Topaz for three weeks when he escaped and disappeared into the forest. Several days later, after traveling nearly twenty miles, the six-month old was picked up by Animal Control and taken to the shelter. The shelter staff identified one of the first owners and reached out to them. They agreed to take Topaz back. However, when the owners arrived at the shelter, they instead surrendered all rights to the pup.

Meanwhile, W.O.L.F. was working with a rescue colleague in the Pacific Northwest to find an appropriate foster or permanent home for Topaz. Unfortunately, all options failed, and Topaz was in desperate need of a placement, as the shelter could not hold onto him for much longer. Because his fate was so uncertain, W.O.L.F. made the decision to rescue the little wolf dog and provide him with lifetime sanctuary. In just a short time, the shelter staff had fallen in love with the wolf dog pup, and they were thrilled that he would have an amazing life at the Sanctuary.

W.O.L.F.’s transport team made all the arrangements to travel to Oregon and bring Topaz home. Though the flight to Oregon was uneventful, there were some troubles with the rental van that delayed the rescue teams return to Colorado. However, the delay allowed them to meet Topaz before leaving, and it was love at first sight. Though mouthy, the young, still teething pup was a bundle of enthusiastic energy and just wanted to play and cuddle with his new human friends. When it finally came time to load him in the kennel for the drive back to Colorado, Topaz eagerly loaded into the crate to start his journey.

The long journey to the Sanctuary was uneventful, and the first stop was to the veterinarian to make sure he was up to date on all his vaccinations and had a clean bill of health. Then it was off to the Sanctuary. Topaz was thrilled to be able to get out of his crate and explore his new home, though he was more interested in the actions of his new caretakers and wanted to be around them constantly. Whenever they would have to leave him alone for a while, he would howl mournfully until someone stopped to say hi once again. It was very clear that this little boy needed a canine friend to keep him company. Luckily, a slightly older female named Sapphire had come to W.O.L.F.’s attention shortly after hearing about Topaz, so arrangements were made to bring her in to be his companion.

At first, both animals were preoccupied exploring the new space where they were introduced, but it did not take long for Topaz to realize Sapphire was in the habitat with him. He desperately tried to get her to play, but his energy and enthusiasm overwhelmed Sapphire. She did not want him to interact with her and actively worked to discourage his attention. Luckily, Topaz, though pushy, was ultimately respectful of her space.

While Sapphire and Topaz’s relationship wasn’t one of love at first sight, they soon grew more comfortable around one another. Over the next few weeks, Sapphire became accustomed to Topaz’s puppy energy and let her guard down enough to enjoy roughhousing with the pup. They continue to roughhouse and play together all the time, usually after hours when all of the volunteers leave for the day. They are very comfortable and happy in their habitat. We know that their bond will continue to strengthen and that they will enjoy many happy years as companions.