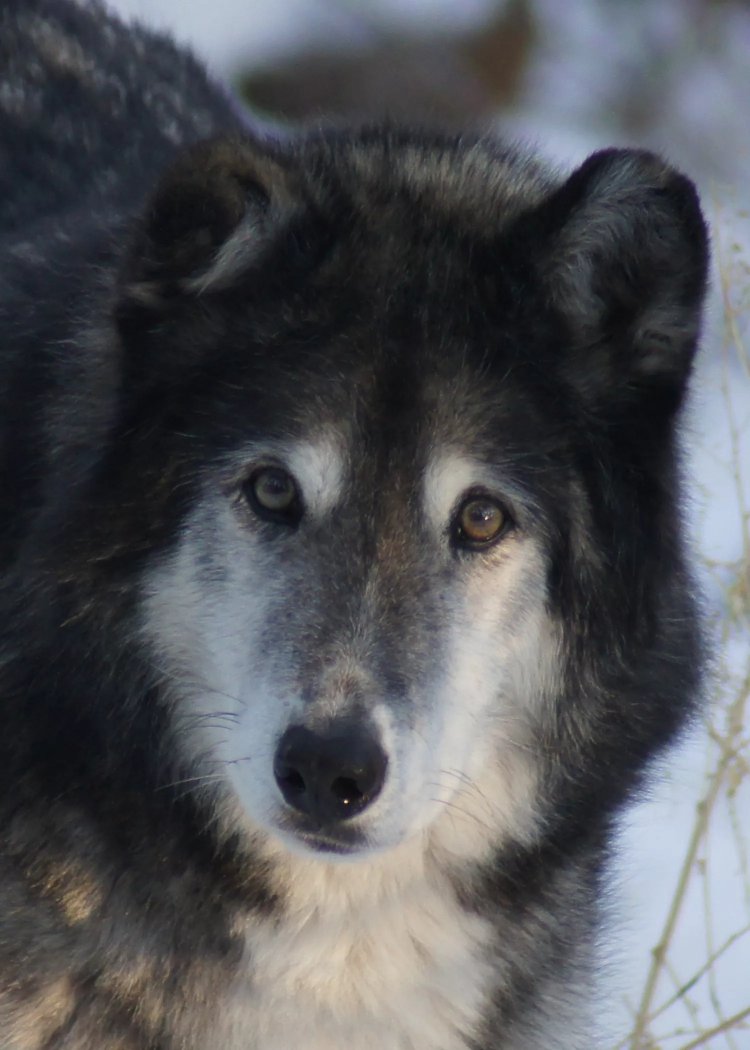 Tonka was originally one of fifteen wolf-dogs in a backyard breeding operation in Arkansas. In early 2002, Tonka’s breeder abruptly departed leaving all of the animals in the care of his girlfriend. With no money to care for the animals, and no knowledge of how to care for them, she called the local Humane Society. A volunteer told her that wolves and wolf-dogs are considered non-adoptable by Humane Societies nationwide, and the animals would have to be euthanized.

Unable to think of any other alternative, the girlfriend called the sheriff, who came out to the property and started shooting the animals. When the sheriff was done, only three animals remained. At this point, a volunteer at the Humane Society intervened and asked the sheriff to postpone further action while she tried to find a placement for the remaining animals. W.O.L.F. was contacted and agreed to find a home for them. The three wolf-dogs, named Tonka, Noel, and Ozzie by the volunteers who transported them from Arkansas to Colorado were placed in a foster home. In 2010, after Noel and Ozzie had passed away, Tonka came to live at WOLF, sharing an enclosure with the sisters Meeka and Tala. Though we rarely like to put two females together and almost never try to introduce a male into an established group of females, Tonka was amazing at navigating the tricky social situation and the three wolves developed a strong bond. Though none of them wanted to be around people, they seemed to boost each other’s confidence and the three of them would often come running down the hill to bounce and chuff at their caretakers through the fence at feeding times.

Unfortunately, by 2014 Meeka and Tala had both passed and Tonka was again alone. W.O.L.F. tried him with a few other individuals but nobody seemed to click until he was placed with an older female named Makoce in 2015. By this point, Tonka was arthritic and slowing down which suited Makoce just fine and the two fell into a quiet routine, each content to have other as company but not needing much else. They would spend their days watching their caretakers from the top of their habitat and lived quite happily together until Makoce passed away in 2017.

Once again Tonka had outlived his companion. W.O.L.F. was worried that he might start to give up to grief so he was soon placed with a slightly younger female named JJ. Like with Makoce, they fell into a routine of lazy days spent basking in the sun at the top of their habitat. With Tonka’s mobility decreasing as he continued to age, JJ took on the role of caretaker and would often stay close to Tonka. While it was sweet, it did make giving Tonka his pain medications challenging as JJ would often try to sneak in and grab them before Tonka even knew that a treat had been offered.

Over the years as Tonka’s arthritis had worsened. He had been receiving stem cell treatments in addition to the medication to make him comfortable. In August 2018, the treatments didn’t seem to be helping anymore and Tonka had begun to struggle getting around his habitat. On August 10, 2018 the heartbreaking decision was made to help him pass. We are honored to have been able to help care for Tonka for most of his almost 17 years and we will miss him forever.