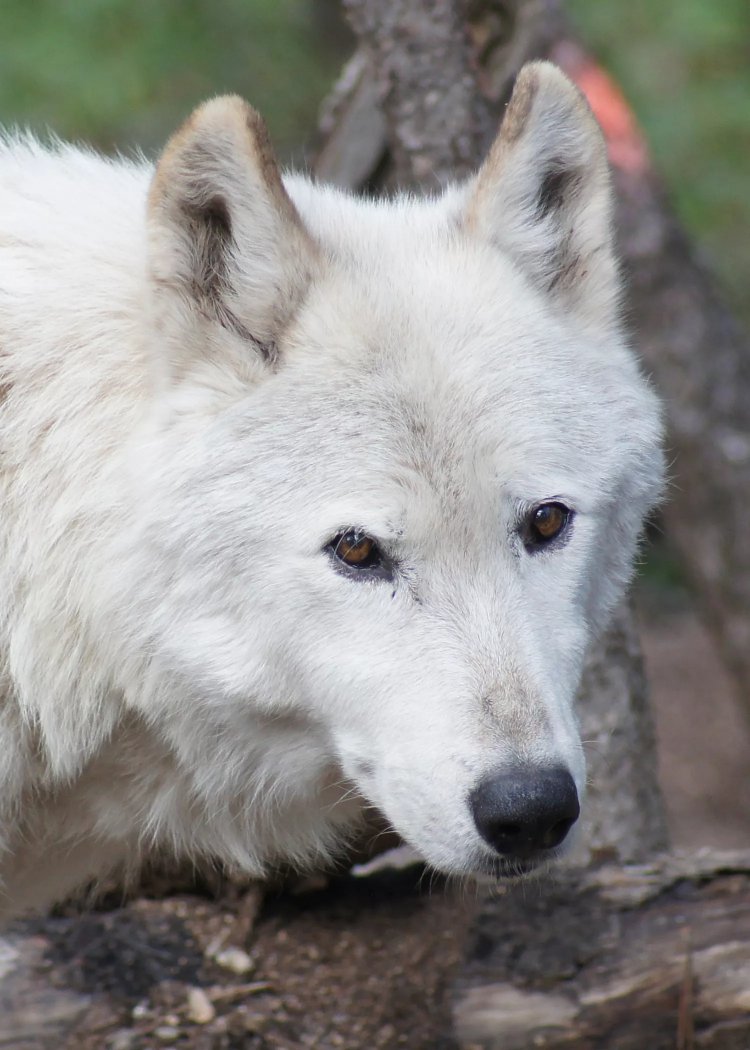 Male
Born: April 15, 1999
Rescued From: New Mexico
Second Chance: June 27, 1999
Returned to Spirit: January 6, 2015
Tate (pronounced TAH-tay) arrived at the Sanctuary as a 12-week-old terrified bundle of fluff in June 1999 with his siblings Makoce (Mah-co-chay) and Peta (PAY-tah). They had been saved from a horrible breeding situation by a rescue in New Mexico when they were only four weeks old (earning them the nickname “The New Mex Pups” which in later years resulted in much confusion among new volunteers). Originally part of a litter of five, all of the pups were extremely malnourished and so full of parasites they were close to death. As they were treated and their health began to improve, the rescue contacted W.O.L.F. to see if we had space for Tate and two of his siblings. We said yes. Tate arrived healthy but extremely scared of people as were his brother and sister. Because of this it was decided to place all of them with an adult female who had recently had a litter of pups shortly before she was surrendered to W.O.L.F. a few months earlier. The pups immediately began soliciting her attention, and Whisper took to them just as quickly, herding them to the safety of her den and regurgitating food for them. Tate lived with Whisper and his siblings until they turned two years old. At this point his sister had decided she was done listening to “Mom” and began fighting with Whisper. Tate, of course, chose to side with his Makoce and Whisper was removed from the group.

Tate remained with Makoce and Peta for the rest of his life. When he was younger, he would join his siblings in pacing and circling the enclosure anytime someone came near but he soon learned that if he stopped pacing and watched where the humans were, treats were often his reward. Though it still took years, Tate was the first of the pack to overcome his fears enough to take treats off the spoon through the fence and eventually even when people were in the enclosure.

Though Tate was very willing to come up to his caretakers for treats it was never a good idea to feed him from your hand. He seemed to think that if he didn’t grab the treat quickly enough it would be taken away, so his jaws would snap shut on the spoon like a steel trap. Despite his eagerness for treats, Tate was a good brother and after he had taken a bite he would politely step back to allow Makoce to get a bite before lunging forward to clamp down on the spoon as soon as it was his turn again.

As Tate got older he started to develop problems with his back that made his rear legs weaken. Despite this, Tate still got around his enclosure with surprising ease and would often come running down the hill in the afternoons to get meats. Mornings were a different matter, however. It soon became commonplace to have to hike up to the top of the enclosure to check on Tate in his fire den to make sure he was okay.

Tate was also incredibly stubborn about taking pain medications and his old behavior of snapping up any treat turned into one of suspicion and he would make sure to chew what was offered no matter how small. He became quite talented at spitting the pills out of his mouth once he had skillfully cleaned them.

It was on January 5th during our morning check that we discovered Tate had passed away during the night. He had appeared normal the day before so it came as quite a shock. In situations such as his, we always submit the individual for a necropsy before cremation in order to find out what happened. Tate had died during the night of cardiac arrest as a result of a tumor in his heart. We hope that his passing was quick and peaceful with his siblings nearby. Tate had been with us for so many years that it is still hard to believe he’s gone, but we are grateful he is once again whole and able to run free.