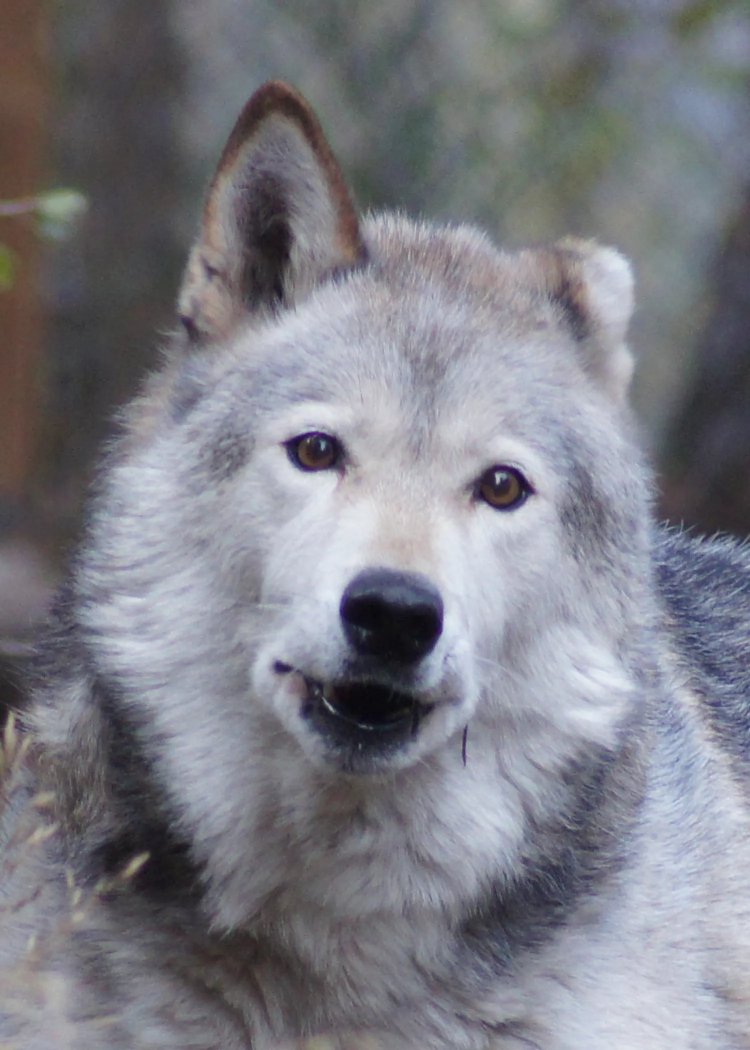 Tala’s story at W.O.L.F. is one of our more unique experiences. In July of 2000 we received a call from a gentleman in Washington state claiming to have several wolves he needed to find placement for ASAP. As he lived in a jurisdiction where animal control could confiscate and kill any animal if they were called out to a disturbance, the animal’s lives were constantly at risk. At the time we did not have space for Tala and her two siblings so we couldn’t take them. Unfortunately, this heartbreaking scenario is one we are all too familiar with at the Sanctuary so we gave him as much information as we could about other facilities that might be able to help and wished him luck. We didn’t expect to hear from him again.

A couple weeks later, we were shocked when he arrived unannounced at the Sanctuary with three 4-month-old wolf dogs, adamant that they needed placement. What were we going to do now? We still didn’t have room for the three of them but there was no way we could turn them away now that they were here. In the end, we agreed to take all three and planned to place Tala and Meeka together at a temporary foster location until space opened up at the Sanctuary. Little did we know at the time it would take 10 years for that transition to happen.

Despite the length of time she spent fostered, Tala lived a very good life. She shared a large habitat in the mountains with her sister and W.O.L.F. made sure that the foster location was well supplied with dog food, meat, and medical care. They were regularly checked up on by Sanctuary staff as well. Tala never became comfortable with humans at the foster location and would often spend most of her time barking at them from a safe distance.

Though the girls got along well, their relationship was not always peaceful and there were numerous instances of sibling rivalry and competitions for dominance. While she was young, Tala was the alpha. Eventually that pack dynamic changed and Meeka took over. Unfortunately for Tala that particular disagreement cost her most of her left ear, but gave her a wonderfully distinctive appearance.

In early 2010, space had opened up for both girls to come to W.O.L.F. so they were caught and brought to the Sanctuary. Tala was originally placed with an older male named Lakota Boy, while Meeka went with Tonka, but it soon became very clear that Tala was not okay with being separated from her sister. So despite our reservations about putting two females together with one male, we let her in with them. The group of three got along famously from then on and we never had any issues with them. Tala was obviously the “middle child” in their group. Neither as bold as Meeka nor as timid as Tonka, Tala walked the middle road, sometimes joining her sister in barking at people, sometimes hiding from them with Tonka and other times simply staying on the other side of the enclosure from them.

As Tala got older she started to develop arthritis but with the help of pain meds she was still able to get around her enclosure. Unfortunately, on the morning of July 10th, 2014 staff discovered Tala laying in her enclosure unable to get up. It appeared that she had fallen during the night so she was rushed to Four Seasons Veterinary Specialists in Loveland. An exam was done and x-rays were taken. What we discovered broke our hearts.

Though her internal organs were all healthy, her spine was riddled with severe arthritis and that had caused extreme muscle atrophy in her rear legs, making them very weak. Because of that, it was likely her fall might have injured her spine. The recommended treatment just to see if she might regain the use of her back legs (which the vets felt unlikely) was a minimum of seven days kept completely immobile at the hospital, with urinary catheters and diapers. With Tala being so unsocial that kind of treatment would have been intolerable for her, so the decision was made to end her suffering and she was helped to pass peacefully. Her spirit and voice are greatly missed.