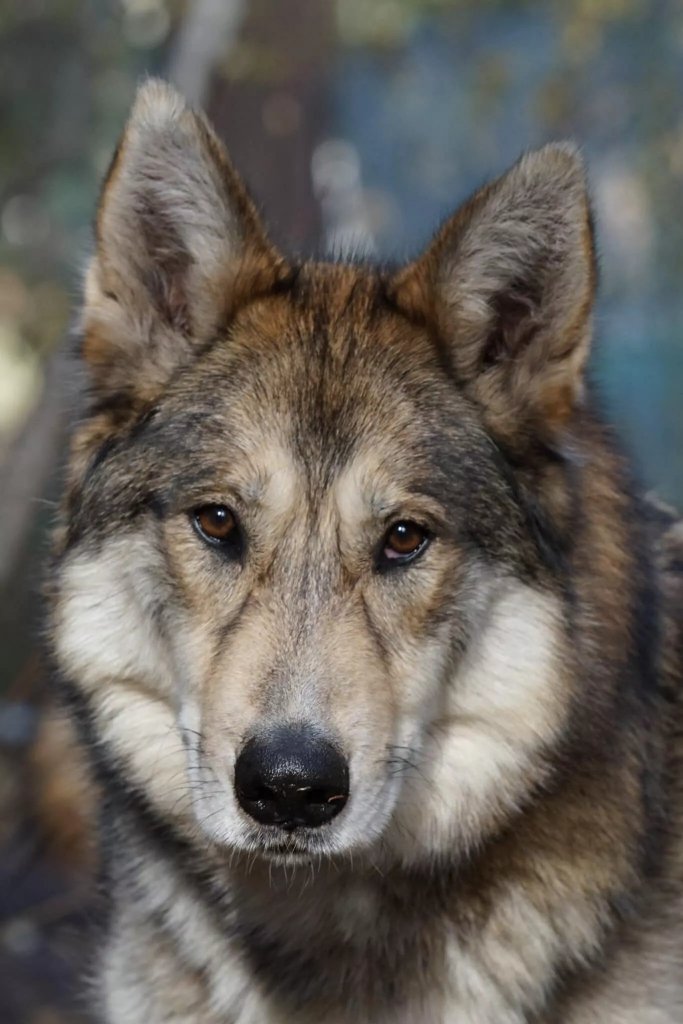 The frantic call came to W.O.L.F. headquarters on a hectic Monday morning in September 2014. A wolf dog named Spartacus was in danger of being shot. Amazingly, the call was from one of the owners. Spartacus had attacked one of their goats and the husband was threatening to shoot the wolf dog if he was not immediately removed.

Spartacus, only 20 months old, had already been through two homes. As incredible as it may seem, the first home was with the owner of a day care facility who purchased him from a breeder as a pup. Spartacus lived his life at the end of a chain. After Spartacus accidentally scratched the arm of one of the day care children he was rehomed.

When family #2 took Spartacus, life became much worse for him. He was once again chained to a tree in a dirt yard with no house or shelter and had a chain collar around his neck. The family could not afford to adequately feed Spartacus, and he grew very, very thin and malnourished. The tips of his ears were eaten away by fly strikes and his family, not knowing any better, used motor oil on his ears to repel the flies. Spartacus spent a summer rubbing his ears raw and growing thinner by the day. The heat was unrelenting, and he dug a hole in the ground to try to stay cool and find a bit of shade. His owners could not afford any veterinary care so he did not receive shots, heartworm tests, or medical attention of any kind.

W.O.L.F. quickly jumped into action and posted the wolf dog on our Rescue Network. No other sanctuary or private placement in his vicinity was able to take Spartacus. W.O.L.F. spent a day analyzing the situation and potential placements for him, and then made the decision to go and get Spartacus and bring him home to W.O.L.F.

Spartacus arrived at the Sanctuary late on a Friday night, four days after the initial call for help. He was finally safe and would never be chained again.

Spartacus is an insatiably social individual, both with humans and wolf dogs, and did not handle his initial isolation at the Sanctuary well. While we had him quarantined to make sure he had no diseases and was healthy enough to put in with our animals, he would howl continuously when people weren’t there to pepper him with love and attention. Much to the dismay of the overnight caretakers, his foghorn-like howl would often echo through the canyon at odd hours throughout the night, usually just about the time they had finally gotten back to sleep (earning him the nickname “Tugboat”).

It was shortly after we determined that he was healthy enough for a companion that we found ourselves dealing with Trigger being alone after a failed attempt to pair him with Pax. Staff decided to put Trigger and Spartacus together, and they immediately began to play and romp around their enclosure. They spent all their time together, often sleeping in the same dog house. It was truly wonderful to see them forming such a strong bond.