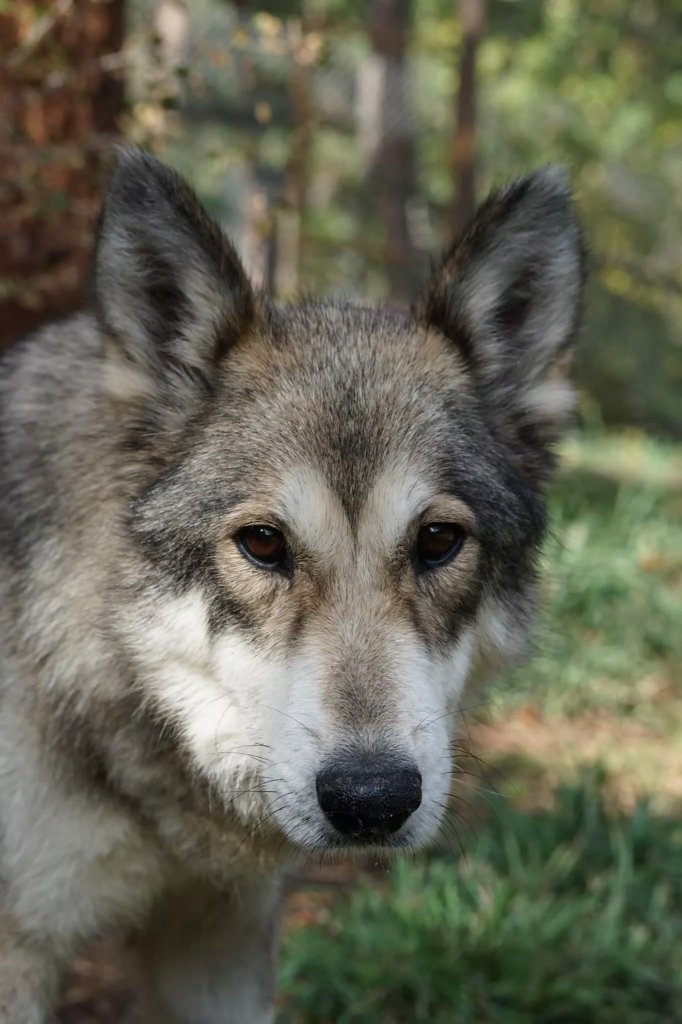 Michelle Cole
Skye arrived at the Mercer County Shelter in West Virginia as a stray in early July, 2019. She had been wandering loose around a neighborhood when she tried entering the home of an elderly woman. Another neighbor saw what was happening and took Skye to her home because she had a fenced yard, and she could feed her and offer water. She called animal control who then brought Skye to the Mercer County Shelter as a stray.

This was not Skye’s first visit to the Mercer County Shelter. In 2016 she had been picked up as a stray but reclaimed by her owners within the 5-day hold period. Her physical condition however, had drastically deteriorated since 2016. When the animal control officer picked up Skye, she realized how extremely thin she was, and Skye groaned as though in pain. Neighbors in the area told animal control that Skye came from a home where she was chained to a tree and could only walk in circles. She had obviously not been fed on a regular basis. As Skye did not have any ID or a microchip, and she was never reclaimed, the shelter hoped to get her to a rescue. However, the only option was a person in NY where wolf dogs were illegal.

It was then that Michelle Cole became Skye’s champion. Michelle was the former Director of the Mercer Shelter and left in 2016 to become the HSUS regional administrator for W. Virginia. Michelle often continued to visit the shelter and organized a group of volunteers to help walk the dogs. She met Skye on one of those walks and was instantly taken by her plight. Michelle saw immediately that Skye behaved as though she was blind and she was very underweight. Skye was not aggressive or fearful, but she did not have much of a zest for life. She felt that Skye’s spirit had been broken by all she had endured. Michelle was determined to find her a safe place in sanctuary where Skye would be able to recover and have a good life.

Michelle reached out to W.O.L.F.’s Rescue Coordinator to see if there was room for Skye. Though there was room to bring in one individual, we were hesitant to rescue Skye at first. She didn’t seem like she would be a good fit for Pax, who had lost his companion Ariel a few months before. As more of her condition and story came to light, however, we soon realized that finding sanctuary placement for Skye would be difficult, and W.O.L.F.’s Executive Director and the Director of Animal Care made the decision to rescue her.

Skye’s champion in WV arranged to fly her all the way to Colorado. Michelle’s husband was a pilot, and on August 13, Michelle and her husband arrived in Colorado with their precious cargo. Knowing that Skye was coming to the Sanctuary with medical issues it was decided that prior to taking Skye to the Sanctuary, she needed to see W.O.L.F.’s vet for a physical and a routine exam.

Dr. Valerie Johnson at Colorado State University Veterinary Teaching Hospital examined Skye and quickly realized there was a serious problem in her abdomen. X-rays showed Skye would need immediate surgery. It was apparent that she had suffered a blunt force trauma to the abdomen that caused a hernia in her diaphragm, allowing most of her intestines to move up into her chest cavity. The trauma had most likely occurred many months before and her lungs were now also compromised. Dr. Johnson felt Skye would die soon without the surgery. She underwent ER surgery the next day. After several days in the critical care unit, Skye was finally strong enough to be transported to W.O.L.F. Her condition was still very fragile, and she moved into the office and adjoining habitat under the watchful eyes of W.O.L.F. staff.

On August 24, only 10 days after her initial surgery, Skye began to have grand mal seizures. Staff rushed her back to Veterinary Teaching Hospital where she spent another several days in the critical care unit. After many additional tests, it was discovered that the trauma had severely compromised her liver function resulting in hepatic encephalopathy, and was the most likely cause of her seizures and her other neurological deficits. She was placed on several medications to help support her liver and control the seizures.

Skye came back to the Sanctuary, and still under the constant care of staff, she began improving. She started a specialized diet of potatoes and eggs to help manage her liver condition while helping her put on weight. Skye loves her food. Realistically she loves all food, and can always be found begging from anyone who is eating around her. She also regularly demonstrates why it is challenging to keep a wolf dog in a home. She has pulled cabinet doors off to get to the trash, climbs on the counters while her caretakers are cooking, regularly runs off with the dishes to lick clean, and has chewed on more than one shoe or article of clothing (often attempting to do so while the person is still wearing it!) It can be challenging to find safe activities to keep her occupied.

It also quickly became apparent that, despite previous medical evaluations, Skye is not blind. She successfully navigates the office and yard without difficulty and regularly has arguments with her reflection in any reflective surface she comes across. However, most of the time she likes to argue with “Ovenwulf”. She has made it very clear that if given the choice she prefers to stay inside the office and can usually be found stretched out in the middle of the floor or sleeping awkwardly on one of her many dog beds. She approaches her caretakers for attention and loves to have her belly scratched. As with many other things, Skye has stolen the hearts of everyone who meets her.

After a month of improvement, Skye had another grand mal seizure on September 24th. Her temperature also spiked dangerously high (105.0). Worried that the medications where no longer controlling her liver condition, she was rushed back to the CSU Veterinary Teaching Hospital. Blood work instantly showed that there was a major problem; her platelet and white blood cell counts were critically low, making her extremely susceptible to infections. They started her on IV antibiotics and set about trying to discover the cause of the sudden change.

During Skye’s four-day stay at the hospital, they did extensive diagnostic testing: bacterial cultures, radiographs, an ultrasound, EKG, and even a MRI with Cerebral Spinal Fluid tap. But everything was coming back normal. There was no sign of infection or cancer anywhere, her brain and heart both presented normal and they even discovered that her liver condition was steadily improving! So what was going on?

The last test they had yet to try was an aspirate of the bone marrow (which is responsible for producing platelets and white blood cells). While the results showed that she was likely suffering from Myelodysplastic Syndrome, there were many possible reasons for this condition, ranging from a reaction to one of her medications, to a genetic condition to an autoimmune disease or cancer.

By the fourth day at the hospital, Skye’s white blood cell count spontaneously improved dramatically on its own, surprising and further puzzling the veterinarians. Though there was still no clear explanation as to why Skye’s white blood cell count dropped so suddenly and dramatically, both her energy level and physiological condition were rapidly improving and the vets felt that she was ready to go back to the Sanctuary.

Skye was certainly ready to be back home. In fact, she felt better than she ever had, and the phrase “Skye Watch” had taken on a new meaning. Though Skye was more active and energetic, she still showed no interest in anything that is acceptable for her to play with. Instead, she entertained herself by digging up the carpet, playing tug with the phone cable, dragging the PC around the room, and chewing up clothing. Her antics earned her the nickname Kali Ma, after the Hindu goddess of destruction.

Everyone was in awe of Skye’s strength of spirit. After her hospitalization in September of 2019, her seizures seemed to be under control with her medications until late January, when she suffered a cluster of grand mal seizures that precipitated a week-long hospitalization at CSU. Unfortunately, after returning to the Sanctuary, Skye’s mobility never returned to what it had been before the cluster of seizures. Skye began requiring assistance to get up, though with her independent spirit, she grumbled dramatically when her caregivers helped her. Skye’s strength seemed to fluctuate, as she had days where she seemed rejuvenated. Caretakers had to smile when they found the printer on the floor, as they knew Skye must have been having a good day.

However, over time, Skye’s condition worsened. The number of good days decreased, and staff began closely evaluating Skye’s quality of life. On April 26th, staff determined that Skye’s quality of life had deteriorated beyond an acceptable point and made the decision to help her pass. With her loving human family by her side, Skye was helped to cross the Rainbow Bridge. Skye’s passing was devastating to all of us at W.O.L.F. and to all of those who loved her from afar. We take comfort in knowing that Skye spent her last eight months surrounded by love. For our part, we feel so blessed to have known and loved Skye. She was a miracle and is an inspiration to us all.