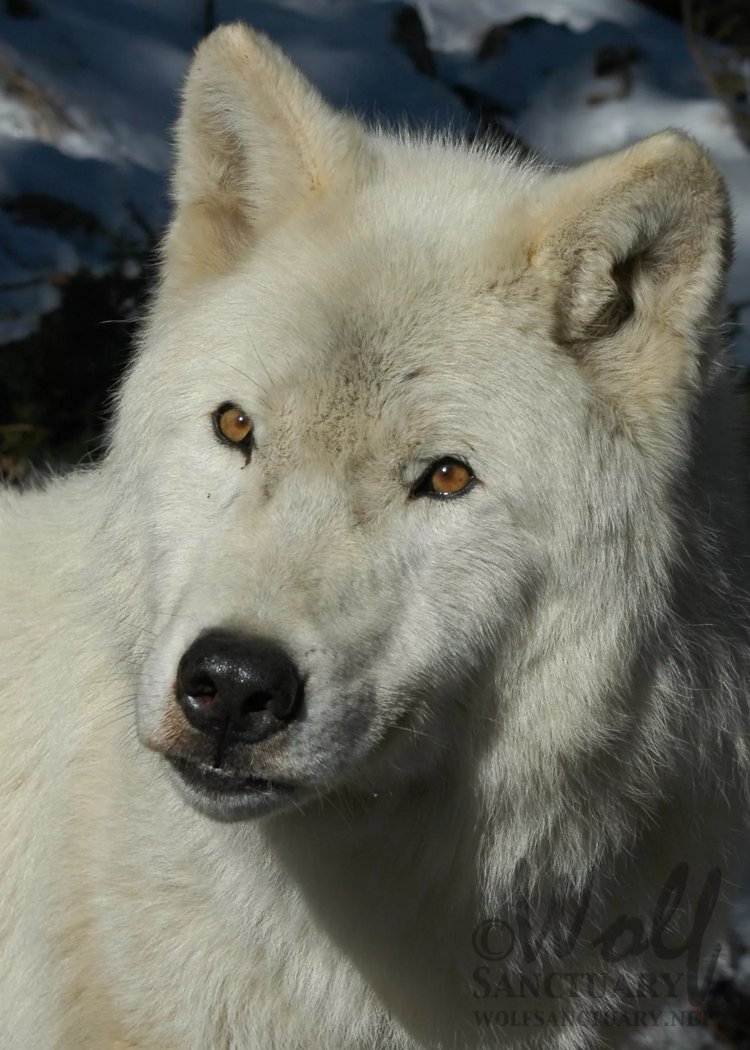 Male
Born: May 5, 1999
Rescued From: New Jersey
Given Sanctuary: May 29, 1999
Returned to Spirit: September 27, 2009
On Memorial Day weekend, in 1999, we were speaking with some friends of ours from New Jersey who operate a wolf preserve. Due to circumstances beyond their control, three separate litters were born to three of the four wolf packs at the preserve. Most of the cubs had been placed in the care of people with USDA licensing, some would remain at the preserve, and it was agreed that two of the small pups would come to live at W.O.L.F.

The cubs were 2 ½ and 3 ½ weeks old and needed to be placed quickly. Here begins the story of Kasha and Shaman, two pure bred captive wolves. Kasha and Shaman came to W.O.L.F. from New Jersey in 1999 as carry-on luggage. The arrival of the pups, pure wolves 2 ½ and 3 ½ weeks old and weighing two pounds, was anxiously awaited at the Sanctuary. A nursery was prepared for them in the cabin’s bathtub, and upon the pups arrival, the lives of staff and volunteers were taken over with the care and feeding of these two little balls of fluff with sharp little teeth that went through nipples as fast as we could replace them. Every day was a new experience and a tremendous amount of work. Human babies at least wear diapers!

Within weeks, the pups were so big that they no longer could be left in the house, let alone in the bathtub! We built an outdoor run for them on the cabin porch, and they were moved outside where we could still watch them continuously. At about this time we started introducing the pups to solid food. The baby wolf food started off very thin and was gradually thickened until it could no longer go through a nipple. Now the fun really began as we taught the pups how to eat and drink out of a bowl. As the pups continued to grow, so did their antics. They turned into petty thieves and pickpockets. They would steal glasses off your face, ties from your hair, and watches from your wrist. Items would disappear from pockets and not be missed until needed.

We decided to name the pups Kasha, for his real mom, Sasha, and his real dad, Kazan, and Shaman, because we felt he had the potential to be a healer. As the pups grew, Kasha was the friendlier of the two and took to human handling while Shaman remained very shy. We had hoped to teach both wolves to be educational animals, but when we started taking them to educational programs, we noticed that Shaman was becoming friendlier and Kasha was becoming distressed by the experience. Not wanting to put Kasha through any experience that might traumatize him, it was decided to leave him at home when Shaman, Nanook and Mesa were taken on field trips to schools, etc. Shaman and Kasha continued to be the best of friends, and Kasha would jump all over Shaman when he returned.

Shaman lived with a number of different animals at the Sanctuary. For awhile he lived with Kasha and Tunyan, until Tunyan grew and decided that Kasha was hers and she had no interest in sharing. Then Shaman was moved into another pack where his youth, size, and energy eventually proved to be too much for the other animals. It was decided that he needed a young companion to keep him busy. Enter Isabeau. Rescued at four months old, she put Shaman (and the rest of us) through everything he had as a pup and then some. Despite her wild and unruly behavior that often left Shaman exhausted and grumpy, he doted on her obsessively.

One fall afternoon, we discovered that Shaman was struggling to get his back end up. Staff helped him to his water and he drank quite a bit. His vitals were checked and he was given some pain meds. The next morning he seemed to be doing better, but as the day progressed he was lethargic and breathing deeply and rapidly. Our vet was contacted and examined him in the late afternoon. Shaman’s rear left paw was knuckling under, and it was quite evident that he had myelopathy, a degeneration of the myelin sheath that surrounds his nerves. There is basically no remedial treatment for this disease, only pain management. Shaman stayed with us for a few more days, but every time he got up to change position it seemed to cause very deep, rapid breathing. One night when staff went to give Shaman his medications, they found that he had passed away.