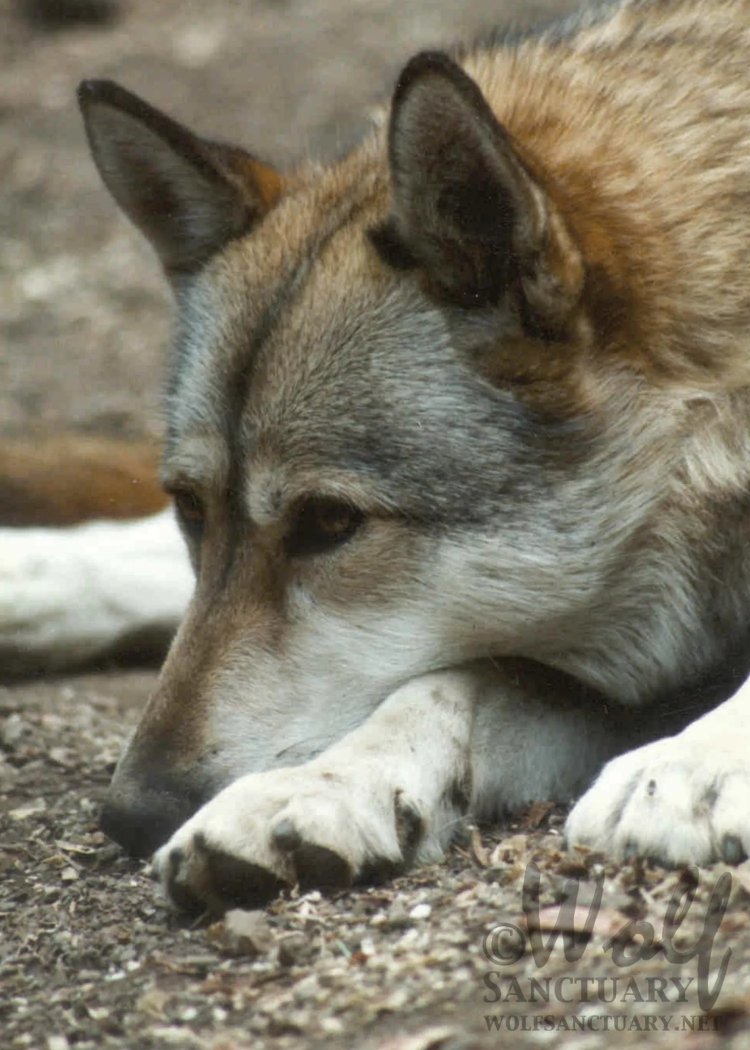 Male
Born: January 1992
Rescued From: Colorado
Given Sanctuary: December 2, 1994
Returned to Spirit: October 20, 1997
On a November night in 1994, W.O.L.F. received a call from a resident of Coal Creek Canyon, Colorado, who had captured an animal in a live trap and needed assistance. The individual had set the trap in order to capture the killer of three of his pet pygmy goats, and he had intended to turn over the animal to animal control. What he found in his trap that evening was an animal with the eyes of a wise old spirit that needed to live. The captor happened to be a biology professor who understood the nature of wolf dogs and predators in general.

When we arrived at the scene, we found a frightened wolf dog, contained in a trap and groaning. It took an hour to calm the animal enough to coerce him into a travel kennel, and with that done, he was taken back to the Sanctuary where he could be examined more closely. He appeared to be a fairly young male, probably high percentage wolf, somewhat underweight, and slightly offensive to the nose. Although cautious, he allowed us to walk him on a leash without incident, and he displayed the typical lope of a wolf. Upon veterinary examination the next day, it was determined that he was approximately two to three years old, seventy pounds (about thirty pounds under weight), and probably had been free-roaming for two to three months. All things considered, he was in good physical shape.

Sasha had most likely been abused by a previous owner as any quick motions of hands or feet caused him to whine and cower, usually hiding his head. With the other wolf dogs, he was as playful as a puppy, and within two months, became the dominant male within his pack. Sasha assumed the role of father to the nine pups that had been rescued by W.O.L.F. and taught them play fighting, how to hunt the elusive mice, and about the establishment of a social hierarchy. He made allowances for playtime, was stern when disturbed from other activities, protective when unsure of some human’s intentions, and loving and nurturing during important rest times. When the pups reached adulthood, they were superbly prepared for life at the Sanctuary. Later on, Sasha was again in charge of rearing a pup at the facility, and he became affectionately referred to as ‘Uncle Sash’.

Sadly, Sasha developed diabetes, and his body slowed down over time. One day, complications from his disease became greater than his body could handle, and this gentle spirit left us. For those of us who were privileged to know Sasha, he was our friend and teacher. For those of you who never had the opportunity to meet him, we hope you will someday know a spirit as beautiful as his.