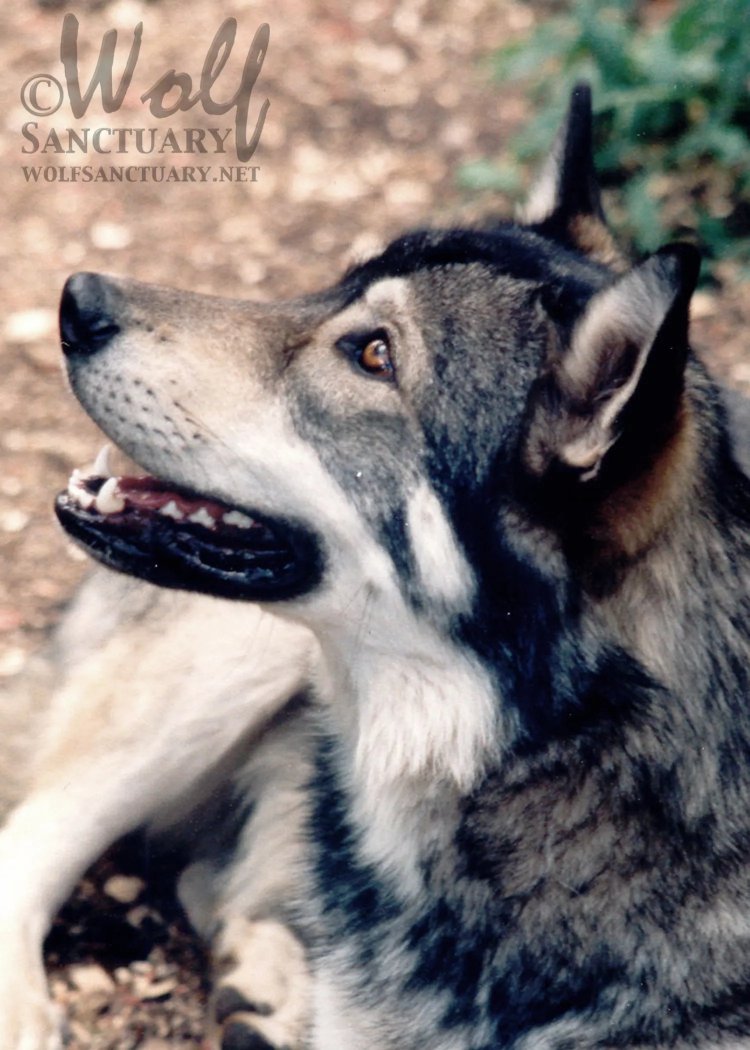 Female
Born: March 1996
Rescued From: Colorado
Given Sanctuary: January 31, 1997
Returned to Spirit: September 20, 2003
W.O.L.F. came into Sara’s life when her owner, who lived in Loveland, Colorado, was trying to place her at a sanctuary because she had been escaping from her enclosure regularly. The last time she escaped, she had been picked up by animal control, and the owner had been informed that it was illegal to possess a wolf dog in the city limits of Loveland. Fortunately, W.O.L.F. was able to take her in.

Several weeks after Sara came to live at the Sanctuary, she had very serious issues with certain individuals, barking, growling and running in the other direction when they were on the property. While attending one of our educational programs, the reason for Sara’s behavior was revealed. Someone who knew Sarah’s previous owner told us that on one of Sara’s excursions outside of her backyard, she had killed a neighbor’s pet rabbit. The owner of the rabbit, who wore a ball cap and had a beard, proceeded to beat Sara with a 2″x 4″ before she could get away.

Even though Sara had her occasional outbursts, she adapted extraordinarily well to life at W.O.L.F. She adored her enclosure companion, Nanook, and followed him everywhere. She adopted Kasha, Shaman, and Tunyan as pups and regularly regurgitated food for them, cleaned them, and taught them proper wolf etiquette. Even as Kasha and Shaman reached full maturity, they would still allow Sara to tidy them up. Sara, and an adult male in her enclosure, Mesa, fulfilled very different roles within their pack. Mesa was the alpha male and responsible for providing order and harmony, while Sara was the omega and gladly accepted the role of aunt to the pups that had been put into her pack over the years.

Sarah, and her pack companion, Mesa, became ambassador animals for the sanctuary. Their personalities were about as different as possible. Mesa was the gentle giant and did not let anything bother him, accepting everything and everyone who came his way. Sara was much more vigilant and would sound the alarm whenever she was concerned. Sara was known for being one of the strongest of the ambassador animals, strong-minded as well as possessing extreme physical strength. When she made up her mind she was going somewhere, you had to hold on tight, because she was going to get there. This contrast of personalities, between Mesa and Sara, provided an excellent exhibition for the educational goal of our programs.

One early fall day, our world was turned upside down. The wolf dogs in Sara’s pack were running along a two foot wide ledge on the backside of the enclosure when Sara was pushed over the edge. Although her fall was a relatively short distance for a wolf, 18 to 24 inches, Sara evidently landed hitting her head. She did not move. Staff and volunteers immediately rushed to her aid. She was not breathing. They began CPR compressions and mouth-to-mouth breathing. She did not respond — she was gone.