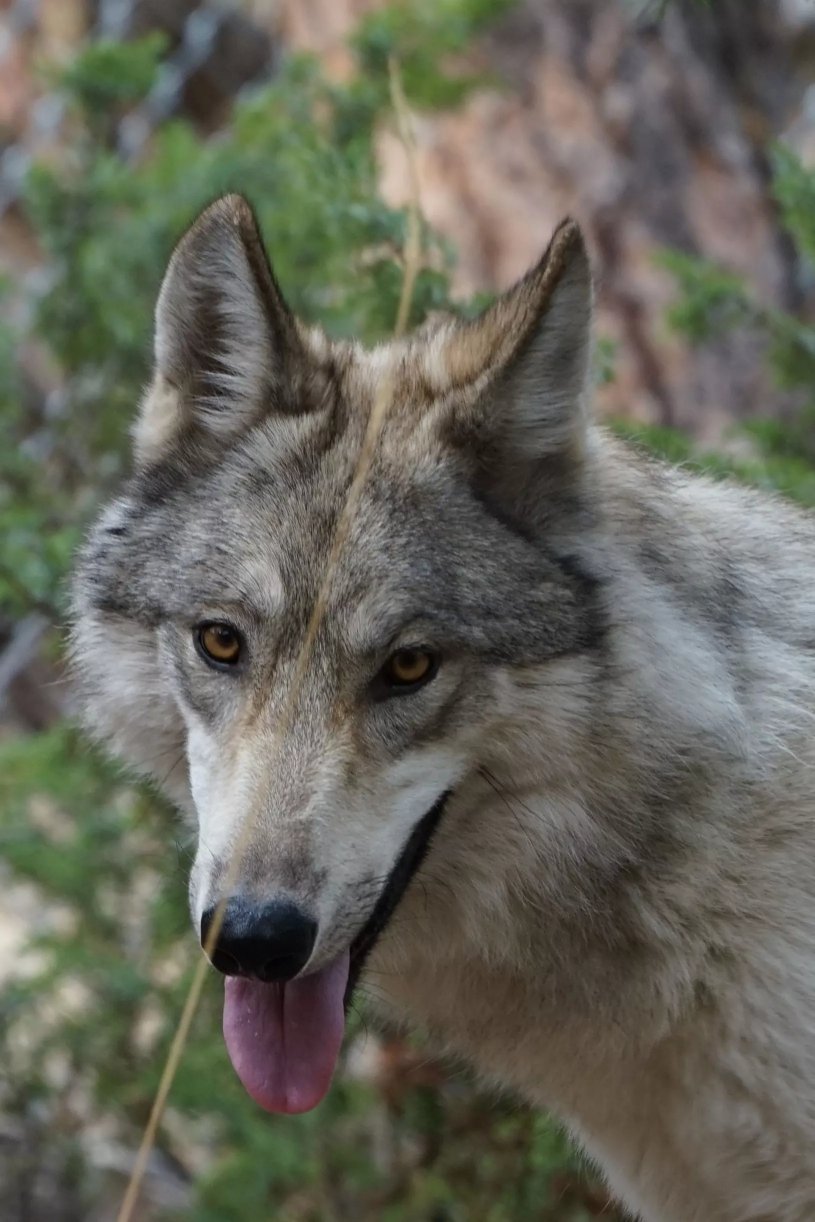 Sapphire was rescued from a back yard breeder as a young pup by a woman who loved wolf dogs and knew that Sapphire needed her help. Bringing Sapphire to live with her at the animal facility she worked in the Southwest, the woman worked diligently with Sapphire to give her the best life possible.

It soon became apparent that Sapphire had a hernia that required immediate corrective surgery. Her owner arranged for the medical care, and though Sapphire was shy with people and was nervous during the crating process, her owner was confident she would be able to easily get her into a crate with patience and slow movements.

When Sapphire returned to the facility after her surgery, despite her owner’s attempts to help her adjust to life at the animal facility, the owner became increasingly worried for Sapphire’s health and knew she needed a new home with professional wolf dog experience and resources.

Sapphire also longed for another wolf dog as a playmate since her only animal companion was a small dog who would not be able to stay outside with her as the weather became colder. Additionally, Sapphire’s enclosure presented numerous potential escape routes that a high con-tent wolf dog could easily exploit.

Sapphire’s owner realized that she needed to make the very difficult decision to find Sapphire a place where she could live her best life. When W.O.L.F. Sanctuary had an opening, it was a dream come true for Sapphire. She would be able to have a forever home in W.O.L.F.’s mountain sanctuary, and she would have the wolf dog companionship that she desperately needed.

As soon as she was crated, the transport team loaded her into the van and took off with Sapphire’s owner on the long drive. After arriving in Colorado, the first stop was at the Sanctuary’s veterinarian to give Sapphire a physical and update her shots. W.O.L.F.’s veterinarian became very concerned for Sapphire’s well-being as she analyzed the blood work and test results.

The young wolf dog had dangerously elevated liver and kidney values that were completely abnormal for an otherwise young and healthy wolf dog. Sapphire needed to be hospitalized over-night. She called in a specialist to conduct an ultrasound examination on Sapphire’s kidneys and liver. Much to the relief of everyone, though the values were still dangerously high, the ultrasound showed no lasting damage to her liver or kidneys. With fluids and supportive care, she would make a full recovery.

The next day Sapphire was deemed healthy enough to be brought up to the Sanctuary and released into a habitat. Still mindful of her still fragile health condition, she was placed near the office where staff could keep a close eye on her. Because Sapphire was extremely nervous around her caretakers in her new environment and still on medications to help with her recovery, it was decided that she would spend at least a few days on her own to adjust and further heal before introducing her to the crazy ball of energy that is Topaz.

After five days, Sapphire had finished her antibiotics and had settled in enough that staff decided to try an introduction with Topaz. Sapphire was let into the larger habitat and Topaz was introduced in with her.

At first, both animals were preoccupied with exploring the new space where they were introduced, but it did not take Topaz long to realize that Sapphire was in the habitat with him. He desperately tried to get her to play, but his energy and enthusiasm overwhelmed Sapphire. She did not want him to interact with her and actively worked to discourage his attention. Luckily, Topaz, though pushy, was ultimately respectful of her space.

While Sapphire and Topaz’s relationship wasn’t one of love at first sight, the soon grew more comfortable around one another. Over the next few weeks, Sapphire became accustomed to Topaz’s puppy energy and let her guard down enough to enjoy roughhousing with the pup. They continue to roughhouse and play together all the time, usually after hours when all of the volunteers leave for the day. They are very comfortable and happy in their habitat. We know that their bond will continue to strengthen and that they will enjoy many happy years as companions.