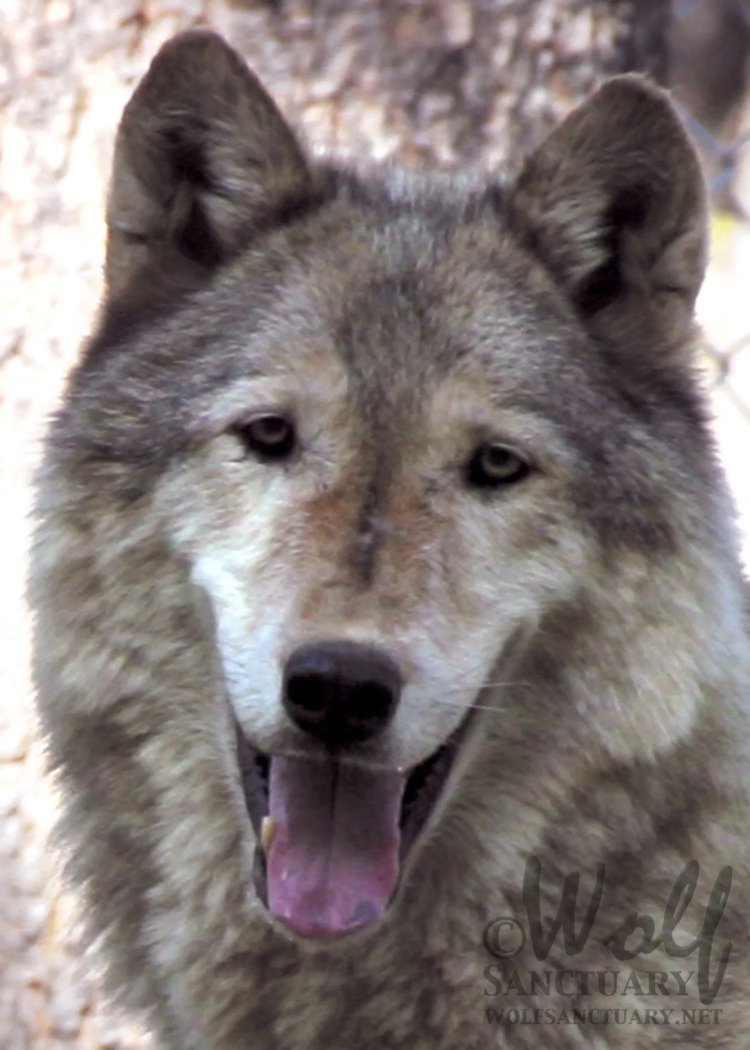 Male
Born: January 23, 1995
Rescued From: Colorado
Given Sanctuary: September 1, 1995
Returned to Spirit: January 8, 2006
Sabastian was born at a breeder’s facility. The breeder kept two of the puppies from the litter and placed the other three pups up for adoption. She told two of the families that received a pup that they were only 13 percent wolf. The families had to sign a contract that had some very bizarre stipulations.

“If for any reason I am unable to care for said animal it will be euthanized, not sold, given away, traded, or released to a shelter.”

“I will not use or give (breeders name) name or address to anyone inquiring about said animal, how to obtain a like animal, or said animal’s origin.”

Although there were stipulations in the contract that required the owner to provide a large, secure enclosure and have the enclosure inspected by the breeder, Sabastian was placed with a couple that lived in a typical suburban home with a wood-fenced backyard and no inspection ever occurred.

Sabastian’s owners had good intentions but started running into trouble early on in the training process. Sabastian would not respond to typical training methods and played extremely hard (his owner ended up with several stitches on the face during one of their play sessions). He was not bonding with the chow that his owners already owned and did not travel well in the car or handle well on a leash.

Sabastian started to destroy household belongings and was relegated to the backyard. There, he destroyed the window screens and hoses and began to get out of the yard. Neighbors expressed their concerns and animal control was called in to help resolve the situation. The owners were finally given an ultimatum by the authorities, and they reluctantly decided to place Sabastian at W.O.L.F.

At about this same time, we were asked by a veterinarian to consider taking a female that sounded a lot like Sabastian. The vet was trying to get Akyra away from an abusive situation where the animal’s life was in danger. As we looked more deeply into both situations and saw the contracts both owners had signed, we determined that Sabastian and Akyra were littermates.

Sabastian was moved to W.O.L.F., but Akyra’s owners did not want to give her up. Finally, the district attorney demanded that Akyra’s owners place her at W.O.L.F. or he would file criminal charges against them. The two littermates were reunited at W.O.L.F. and bonded very quickly. Another male, Kai, was received a month later, and the threesome was introduced to a new enclosure together. They all got along well, though from time to time Akyra acted aggressively towards Sabastian. Eventually, Akyra decided that Kai was her mate and did not allow Sabastian to get attention from him. Sabastian was placed with Indigo, and the two did very well together in spite of their age difference.

In fall 2005, Sabastian was diagnosed with osteosarcoma in the lower jaw. This presentation was basically untreatable and the only meds prescribed were for pain. We started feeding Sabastian bite-size chunks of red meat and cooked chicken twice a day. He loved the attention and special meals, and we were not seeing any effects of the osteosarcoma in Sabastian’s attitude, appetite or play habits with Indigo. Although the tumor became rather unsightly, it did not seem to be affecting him.

From the time Sabastian was diagnosed on November 17, 2005, through December, we were lulled into a false sense of well-being. On January 6th that all changed. Suddenly, Sabastian was having problems breathing and would not eat. On the 7th, it was clear that the cancer was progressing very rapidly, and all Sabastian wanted to do was drink water and be loved on. We initiated some stronger pain meds in his regimen and waited to see if he responded to them.

When we checked on Sabastian in the early morning hours of the 8th, it was clear the meds were not helping. He was lying at the bottom of his enclosure with Indigo lying close by, and he was not moving at all, except to look up at us in obvious pain. We quickly administered a tranquilizer to keep him comfortable until the vet arrived. A number of volunteers were arriving at the Sanctuary, and we allowed them to visit with him two at a time. As the fourth set of volunteers was saying goodbye to Sabastian, he passed.

As we do with all the animals that pass at the Sanctuary, we left Sabastian with his companion for a while so that Indigo could process what had happened. We then took Sabastian into Akyra and Kai’s enclosure so that they could have an opportunity for closure. Akyra approached Sabastian’s remains, inspected his tumor, checked out the rest of his body and began to nuzzle and lick the back of his neck. This moment and Sabastian’s life will live forever in our memories.