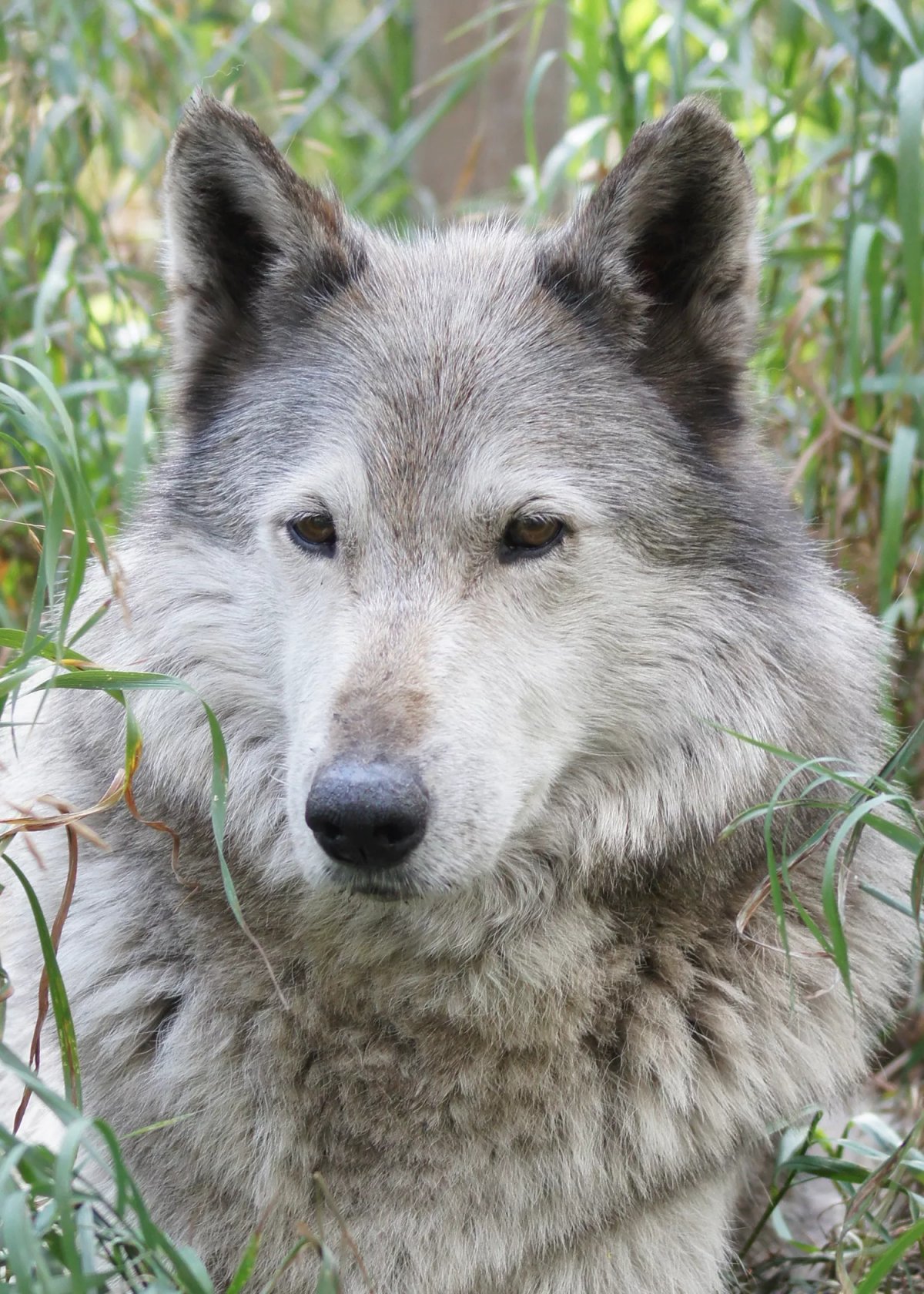 Female
Born: May 1, 2003
Rescued From: North Carolina
Given Sanctuary: August 27, 2010
Returned to Spirit: November 6, 2013
Born in Utah in 2003, Renata lived the first three years of her life as a pet with her brother, Manny, in Utah. In 2006, local ordinances forced her owner to surrender the animals to a rescue in California, and Renata was heartbroken by her separation from the man who had raised her from a few days old. Her mournful howls and constant pacing prompted her new caretaker to put her on Prozac. After the caretaker injured himself badly in 2007, Renata again found herself needing a new home to avoid euthanasia by animal control. This time she was sent to a facility in North Carolina. Her brother arrived at the same shelter shortly thereafter.

The woman in charge of this facility considered death by shotgun to be a humane way of euthanizing the animals in her care, and Manny, for reasons unknown, was killed. This atrocious behavior did not come to light until an employee made public photos of a mass shooting. Desperate to save the remaining animals from harm, rescues all over the country started looking for placement for her animals and W.O.L.F. agreed to take Renata.

When we met Renata at the airport, we found a seven-year-old animal that looked much older. Her fur was coarse and matted, with huge chunks missing as if someone had cut large sections away with a pair of scissors. Her ears were furless from fly bites, her front teeth worn to almost non-existence, and her feet so dry and cracked that she constantly shifted her weight back and forth in discomfort.

As Renata’s health began to recover, we discovered an animal with a vibrant personality. Renata had a strong alpha nature, and one always played by her rules when in her enclosure. These rules included being forced to leave because you forgot she disliked gloves, the mandatory belly rub after she fell over from doing a headstand in your lap, and submitting to the routine “bath” as she would always find a way to lick your stomach no matter how many layers of clothing you wore. Renata was very dedicated to her elderly companion, Webster, and the two would often be seen walking or sleeping together.

Less than a month before the High Park Fire, Renata began having seizures. Despite our best efforts, we were never able to discover the cause of her sudden illness and could only ever manage the symptoms. For over a year she remained happy, though the riot of colorful behaviors was muted by the medications controlling the seizures. She started taking regular walks with Webster around the property and loved to splash or sleep in her water trough during the summer.

August 2013 brought an emotional roller-coaster that lasted for months. Renata was slowing down and the medications were no longer controlling the seizures as well as they had. We started adjusting dosages and changing meds to try to help her cope, but the question we found ourselves asking repeatedly was “Is today the day we help her pass?” Some days it looked like she was ready, but the next she would be up and bouncing around as energetically as her new companion, Sigmund. True to her nature, she kept us all on the edge of our seats, trying in vain to read the mind of the wolf with the heart of a survivor. In the end, Renata was the one to make the decision and left us on her own the night of November 6, 2013.

Renata was a mystery to the end. The necropsy could not determine a reason for the seizures or even a cause of death. It appears that Renata, true to form, changed the rules on us one more time and left us not because her body failed her but because she chose to.