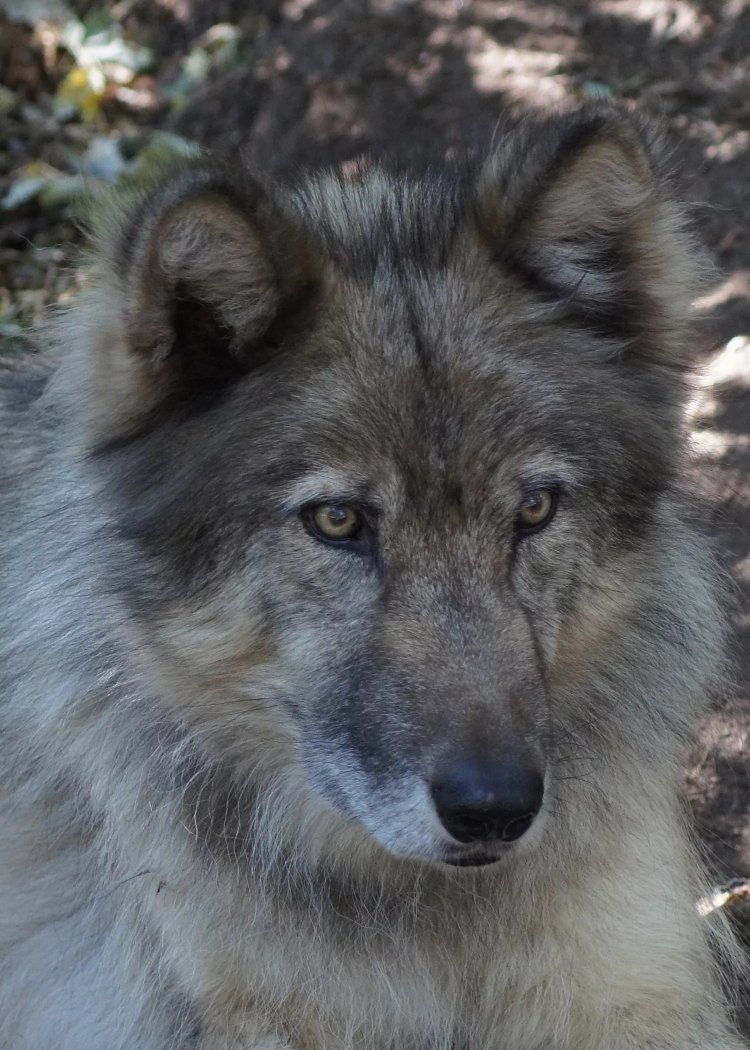 Sequoia was one of nine siblings that came to W.O.L.F. at two weeks of age. The sanctuary received a phone call from a terribly distraught individual who was trying to find a home for nine puppies and their mom. The family who owned them was being forced to move and could not find another home that would allow animals. They had contacted the humane society and been told that all wolf dogs that are surrendered by their owners are automatically eutha­nized. The individual that the owner spoke to at the humane society suggested that she call us. We accepted the pups and watched them closely as they grew and developed their own personalities to determine whether they could be adopted out to families. We ended up placing five of the puppies and keeping the other four.

The alpha male of the pack, Sasha, adopted these pups and became the patient yet insistent instructor. Watching them imitate his behavior and get reprimanded when they were out-of-line was amazing. Encouraging them to fight back by pushing them down a snow bank was hilarious. Their biological mom and their adopted dad switched off responsibility and showed great patience.

Sequoia was the first to meet you at the entrance gate to the main compound at W.O.L.F. She never learned that jumping up on people was inappropriate and did everything in her power to give you hugs. One August morning, Sequoia was very unresponsive and definitely not herself. Phoning ahead to the Emergency Critical Care unit at Colorado State University Veterinary Teaching Hospital to let them know we were bringing in a critically ill animal, we rushed Sequoia down the mountain. Upon arrival, the vet met us at the door with a gurney, and after doing a quick check of Sequoia’s vital signs, we were informed that we needed to take her to critical care “now”.

When the vet returned, he informed us that he had removed 700 cc’s of blood from the pericardium around Sequoia’s heart and that she was resting comfortably. It would be necessary to do an ultrasound and possibly an echocardiogram on Sequoia to find out what caused the blood around her heart. By now volunteers had heard about Sequoia and joined us at the hospital. Everyone prayed for good news. It was not to be. The vet explained that she had a cancerous tumor in the right atrium of her heart and that it was about the size of a golf ball. This particular cancer, hemangiosarcoma, was inoperable because of its placement. Sequoia would be with us for only a few days to a few weeks.

With heavy hearts we brought her home to be with her family until it was time for her to leave. She seemed very normal as the removal of the fluid from around the heart gave her significant relief. Sequoia enjoyed four-and-a-half additional days with us and her siblings. On August 17th she collapsed while greeting some volunteers arriving at the Sanctuary. A quick analysis of her condition left no doubt that it was time for her to leave us. Sequoia departed peacefully.