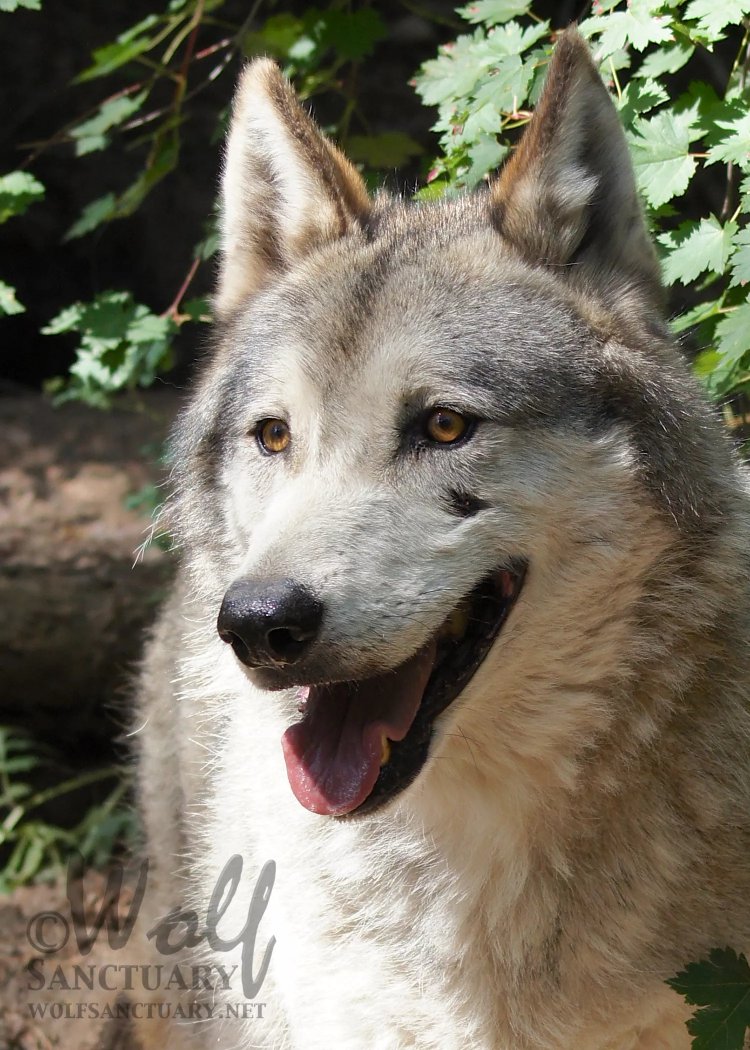 Male
Born: April 1, 2000
Rescued From: Texas
Given Sanctuary: February 10, 2007
Returned to Spirit: January 31, 2013
In early 2007 we received an email from Texarkana, Arkansas about a male wolf dog in danger of being euthanized. It seemed the original owner had moved and could not take either of his animals. They ended up being left in a small kennel in his father’s backyard. The wolf dog and his black lab companion found a way out of the enclosure and started exploring the town. Although they caused no problems, they were picked up by Animal Control and brought to the local shelter. The father was unable, or unwilling, to pay the $260 in fines, plus daily fees, to get the animals back. The black lab would be put up for adoption, but the wolf dog would have to be euthanized, as shelters consider wolf dogs too much of a liability for them to adopt out. Fortunately, a concerned individual was not about to let that happen. She contacted W.O.L.F., eager to keep this gentle animal from being killed. We quickly began making plans to bring him to the Sanctuary.

Rachane’s rescuer arranged for him to have a veterinary exam and neuter, and at our request found transportation halfway to Colorado. When W.O.L.F. staff met Rachane at the halfway point, the first look at him revealed a deep gash under his left eye and fresh wounds around his mouth. What had happened? Rachane’s transporters explained that the shelter had used a catchpole to get him out of the kennel and were obviously not very kind about it. We loaded him into the W.O.L.F. vehicle and got him to the Sanctuary as soon as possible.

Finally, a little after midnight, Rachane arrived at W.O.L.F. He walked very politely to his new large enclosure on a leash with no problems. Once there, staff was again unable to remove the collar. The collar had been on him for so long, it was completely stuck! Finally, we all held Rachane and cut the collar off with a knife. Through all of this, he never snapped at anyone. It became very apparent just how unnecessary using a catchpole was.

Rachane’s new home was the front side of Arkte’s enclosure. The two were kept separated for three weeks so that Rachane could adjust to his new life and surroundings. Early in the afternoon of March 1st, an opening was made in the fence between them. For the first few minutes, neither of them seemed to know what to do. But after exploring each other’s territories, it was time to play! They began running full speed, chasing each other, jumping around, and having a great time. This continued until both wore themselves out completely. To see the way that the two animals bonded was truly amazing. Arkte had never had a companion before, and Rachane seemed to be totally taken with her.

They lived together for the next six years and were almost inseperable. Although Rachane would occasionally appear interested in human interactions, Arkte was always there to “protect” him from his caretakers and would alternately try to chase him or the caretakers off.

In 2011 Rachane was diagnosed with skin cancer. It was a relatively rare form and while we were able to surgically remove the tumor there was a chance it could reappear or have metastasized. We kept a close eye on him for it reoccurring. Rachane remained active and happy until January 31, 2013 when one of the caretakers noticed Rachane being extremely lethargic and unresponsive. The vet was brought up to look at him and it became obvious that he was in bad shape. It appeared that the tumor had metastasized internally and had ruptured. Even with emergency surgery it was unlikely that he would survive. So the decision was made to make him comfortable and help him pass.