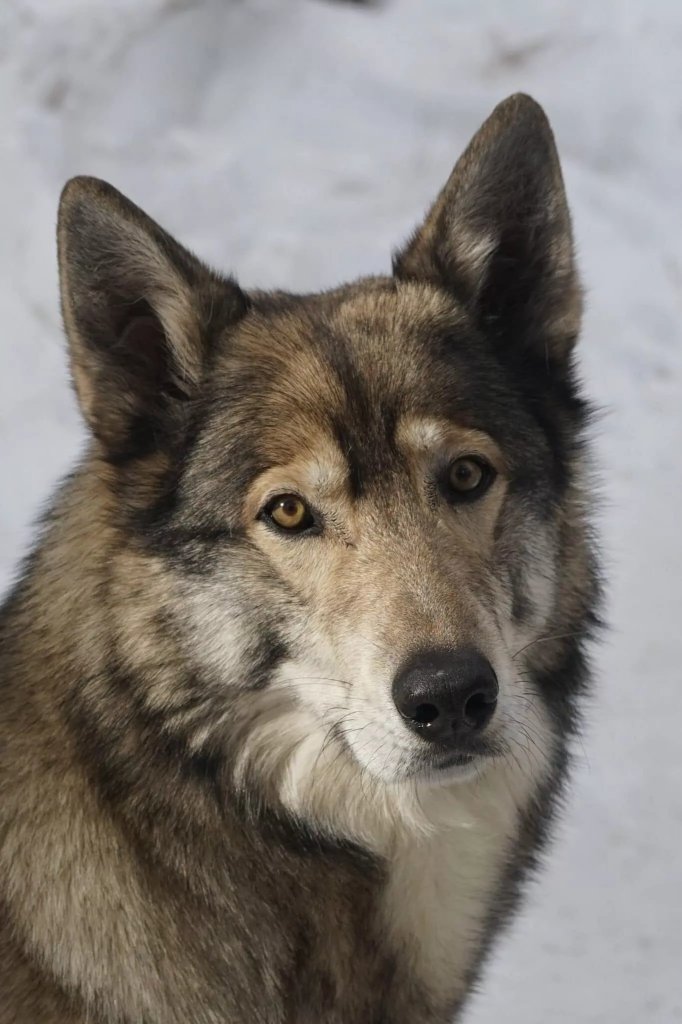 In July 2013, the Sanctuary welcomed the young wolf dog named Outlaw. Picked up as a stray and taken in by an animal shelter in Utah, shelter staff listed him as a one-and-a-half-year-old Siberian Husky/Shepherd mix, not knowing that he was actually a wolf dog. The misidentification worked in his favor for two reasons. First, he most likely would have been deemed unsuitable for adoption and euthanized, and secondly, he was adopted by an incredible, kind, loving woman who did everything in her power to provide for his every need. She was his champion and gave him the name Outlaw’s Spirit, a.k.a. Outlaw.

Outlaw lived with his champion and her family for a little over three months. During that time, he became increasingly more willful, destructive, and difficult to handle, even after obedience training. He was overly protective and possessive of his champion, refusing to allow other canines and some people near her. He pinned her and other family members against walls, doors and counters with his body and mouthed the faces and heads of people and cats. He didn’t like being confined and began to dig under the suburban backyard fence or tried to go through windows if he was inside. The entire family became concerned about their safety, as well as his.

The commitment of his champion was amazing. She wasn’t aware that Outlaw was a wolf dog when she adopted him. She consulted and employed professional trainers to work with them. Some told her not that she shouldn’t bother trying and that euthanasia would be best. However, she had made a promise to Outlaw to love and care for him for the rest of his life, and she meant a long life.

One trainer had worked previously with several wolf dogs. His recommendation for Outlaw was a sanctuary placement. He described Outlaw as “generally good natured, pleasant, a loving young wolf, but exceedingly willful”, though he “did not see any behavior that [he] would term aggressive.” It was heartbreaking for his champion to let him go, but she kept her promise to him by ensuring he would have a secure environment that suited his nature and one where he would be safe for the rest of his life.

We met Outlaw and his family in western Colorado. His champion made the four-hour trip in the back of the vehicle so she could be next to him. She had every document pertaining to Outlaw since adoption and some photos in a folder along with all of his toys, food, treats, and his pillow ready to send with him. He was on leash and greeted us with a wagging tail and toothy kisses. He walked into our travel kennel with no resistance and slept peacefully nearly the entire trip to the Sanctuary.

Outlaw enjoyed human companionship and his larger space, but he needed an animal companion to complete his new life. In August 2013, W.O.L.F. rescued Reese, a two-and-a-half-year-old female from Oregon. The match was a good one. Reese and Outlaw were often seen frolicking wildly throughout the day, every day. She taught him the joys of a water trough, and he showed her the joys of human affection. Reese was still very shy with people, but she loved to watch them from a safe distance. Reese was the constant companion and playmate Outlaw so desperately needed.

In the early winter of 2016, volunteers and staff noticed that Outlaw was walking with a limp. It turned out he had a torn right ACL. W.O.L.F.’s veterinary team wanted to see if Outlaw’s leg would heal without surgery (an option that is sometimes appropriate). He and Reese were moved to a smaller, flat enclosure to help restrict Outlaw’s mobility to allow for healing. The best laid plans did not work. A few days later, Outlaw tore his left ACL. Surgery was now the only option, and it would require surgery for each leg approximately three months apart. Outlaw had his first surgery in late December. He spent nearly three months in recovery at an offsite infirmary and at a Sanctuary location specially modified to keep him comfortable and safe, always under the watchful eyes of staff. Outlaw visited with Reese on a regular basis to maintain their strong bond. They were always happy to see each other.

On March 27, 2017, Outlaw had his second surgery. He recovered very quickly, and he was reunited with Reese in the summer of 2017. He and Reese have resumed their relationship as if they had never been apart. Outlaw is still an outgoing and social animal, and Reese is still a shy and reclusive wolf dog. They are perfectly compatible, and they spend their days together in their mountain home. Outlaw never misses an opportunity to socialize with staff and volunteers, while Reese is content to watch her happy and healthy companion from a distance. Life is very good again in the world of Outlaw and Reese.