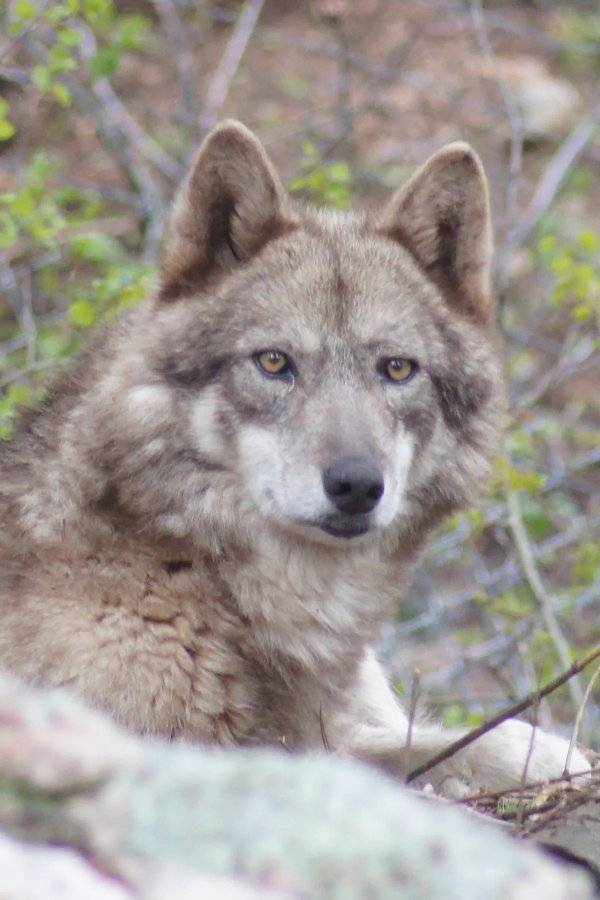 Orion was our miracle, one we did not expect to have the privilege to get to know. In May of 2015, W.O.L.F. was contacted by Navajo County Animal Control in Arizona about a wolf dog they had caught up that had been harassing livestock outside of a reservation. Since we had helped them out with a similar situation back in 2013, they were wondering if we could rescue this boy as well. They hadn’t been able to do any exams on him but thought he was relatively young, between two and three years old. W.O.L.F. had the space, so we agreed to help.

Since they had done nothing with him at the shelter, and it was unlikely he had ever had any kind of care before being caught up, we made arrangements for Orion (named after the constellation that watched over us during the long journey back to Colorado) to go immediately to the vet for an exam upon arriving in Colorado. At the start of the exam, a couple of things became immediately apparent. One was that Orion was old, though the vet couldn’t say anything more specific than “ancient.” Two, he had a very distended gut. There were two possible culprits: either a heavy parasite load or heart disease. Though we were hoping it was parasites, we found out that it was his heart. Because of how bad it looked on the ultrasound, the vet wasn’t sure if he would live longer that a week or two at most.

It didn’t feel right to help Orion pass then and there, especially with what he had just been put through over the last month, so when we found out that the condition was not really painful and could be managed with medications, we decided to give that a try. Even if Orion only had a few more days to live, he would at least get to experience some freedom again.

For the first week, we watched him with baited breath, waiting for a sign that it was time. Then into the second….and third. To our delight, Orion didn’t seem to be suffering or getting worse. In fact, he was improving! He had a good appetite, his belly was getting smaller, and he was actively engaging with his neighbors. He even reacted fairly calmly about his caretakers being in his enclosure. Orion would join in the chorus with a beautifully deep howl that would echo throughout the canyon, or sometimes sing solo. Whenever we would walk one of the other wolves past his enclosure, he would run his fence line, hackles raised as he defended his territory from intruders.

Because of the severity of his heart condition and the number of medications he was on, Orion was never able to have a companion animal join him in his enclosure. He did not seem to mind, however, and seemed content to interact with his neighbors through the fences. Over the following months, we continued to be amazed by his determination and strove to help him live comfortably by modifying his medications as needed.

Starting in April of 2016, we began to notice that his medications weren’t managing his condition as well as they once had. Though his appetite and attitude remained normal, his belly kept getting bigger no matter how we modified his medications. Because of the type of heart condition he had, allowing him to pass on his own of pulmonary hypertension would have been the equivalent of allowing Orion to drown. We knew we had to take action sooner rather than later to save him from that suffering.

On June 8, we finally made the difficult decision to help Orion pass. He was surrounded by the people that got to know and love him for the last year as his spirit was helped to cross the Rainbow Bridge.