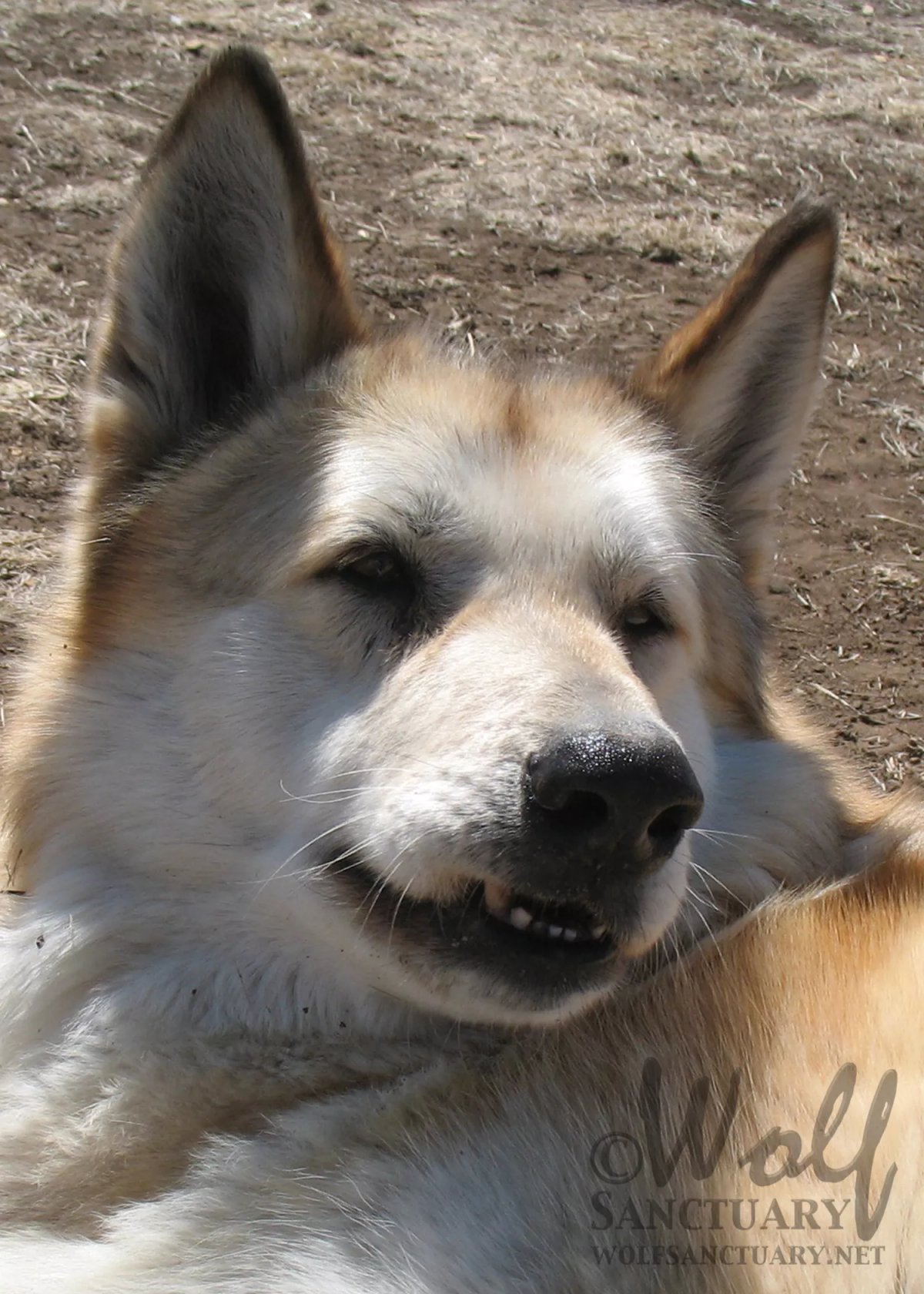 Female
Born: December 1996
Rescued From: Arizona
Given Sanctuary: June 6, 1998
Returned to Spirit: May 23, 2009
Nugget began her life with a family in Tucson, Arizona. Originally the pride of the family, she grew quickly and became easily bored. Her high energy level and extreme curiosity soon landed her chained up in the backyard. As time went by, less and less time was spent with her, until ultimately she was lucky to even get food or water. When she reached a year and a half, Nugget was confiscated by animal control due to neglect and malnutrition.

The day before Nugget was scheduled to be euthanized, her champion arrived on the scene. Carol was a retired woman who visited the shelter regularly to emancipate some of the animals on death row. Nugget and Carol’s eyes met, and Carol knew there was something special about Nugget. She paid the adoption fee, had Nugget checked out medically, and vaccinated and spayed. Then it was off to Carol’s home with the rest of her death row menagerie consisting of cats, dogs and ferrets, totaling fourteen in all.

Nugget soon exhibited the mischievous behavior typical of wolf dogs. She was into everything and damaged human possessions. After several months of trying to train Nugget, it became apparent to Carol that she would be better off in a rescue that specialized in wolf dogs. After weeks of searching and contacting various rescues, Carol was referred to W.O.L.F. Nugget travelled to Colorado as air cargo and made the car trip from the airport to the Sanctuary.

After a brief isolation period to ensure that she was healthy, Nugget was placed with Ahzeem, a young male. They became instant friends. Nugget was finally able to behave like the wolf dog she was. Not long after, Sky, a young wolf dog puppy was placed with the pair. He was immediately accepted, and Nugget began her mothering role, which she took very seriously. After a short time at the Sanctuary, Nugget did not resemble the scared, shy, thin animal she was when she arrived. Although she barked like crazy and intimidated some visitors, as soon as you entered her enclosure, she would sit in your lap or demand a belly rub.

Nugget, Sky, and Ahzeem enjoyed many years together before Ahzeem’s passing in 2004. Nugget became ill in late 2005 and was started on antibiotics. The drugs did not help, and she continued to worsen before being rushed to the vet hospital. After days of testing, the vets determined she had three different infections in her blood stream that required days of hospitalization on IV fluids and antibiotics to cure. Thankfully, Nugget made a full recovery.

One morning years later, volunteers found Nugget unable to move and struggling to breathe. We rushed her to the vet hospital where the diagnosis was quick and painful to hear. She had a hemangiosarcoma, which had ruptured and was bleeding into the sack around her heart. This was compressing her lungs and her blood was not oxygenating properly. Unfortunately, there was no way to fix it. The vets drained the blood from the heart sack to give her some temporary relief but cautioned us that the sac would fill up again, and if the symptoms were not noticed fast enough she would suffocate. We obviously could not take that risk, and the decision was made to euthanize her.