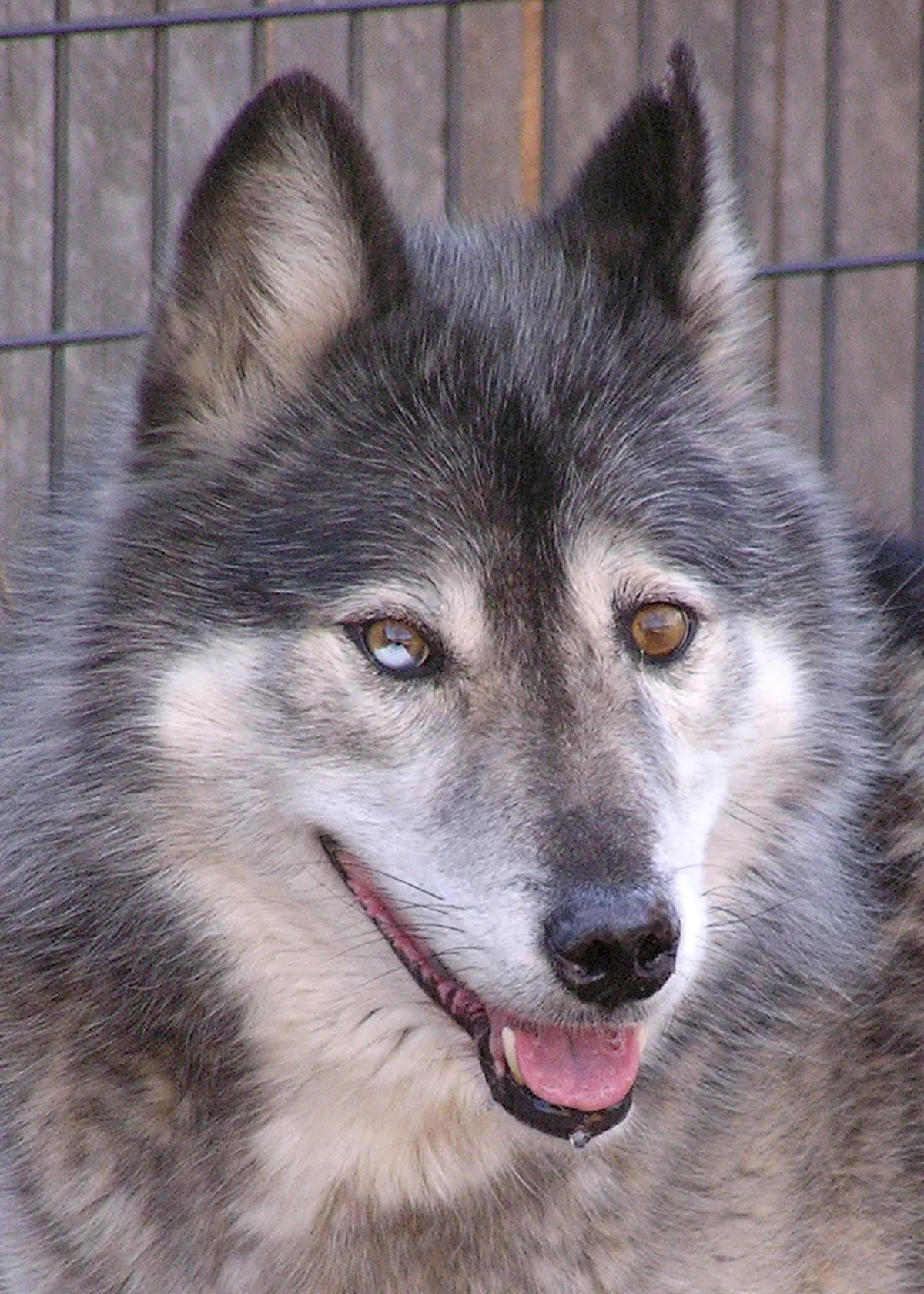 Female
Born: April 2002
Rescued From: Arizona
Given Sanctuary: October 6, 2002
Returned to Spirit: January 5, 2010
Noel first graced us with her presence on October 7, 2002 at the ripe old age of about eight months. She and her two brothers, Tonka and Ozzie, arrived just after midnight, scared, skinny, shaking, with the same tragic and appalling background stories of abuse shared by many of W.O.L.F.’s magnificent charges. With some experience under our belts from fostering our previous pack, we went to work to change their lives. With love, care, nourishment and the continuous affirmation that they were wanted and protected, they soon blossomed into strong adventurous adolescents and on into adulthood, with the knowledge and security that now they were Home. And oh boy, Home was where the big fun was! Tug-of-War, King and Queen of the Doghouse, Meat Treat Days on the walkway, cruising the big yard, drinking from the birdbaths, peeing on everything, claiming it all; yep, all good, all right here, all right now, all day, every day. We would have loved for it to last forever.

Noel was diagnosed with lupus in the spring of 2008. The disorder was managed with medication. The symptoms disappeared and recurred at various times and her meds were halted then prescribed again accordingly. Noel never complained about this situation. The condition never slowed her down or inhibited her ability to wholly live. After all, she lived moment to moment. The medication was merely a small addition to her always-joyful routine and she didn’t mind at all. She clearly and truly flourished; everything in life warranted a great big smile and she was never short on those.

In the summer of 2009 a small lesion emerged on her snout, which was at first thought to be a recurrence of lupus. She went back on her meds but this time the obtrusion grew. By September it had grown to be quite large at a rather alarming rate. It began to bother her and she pawed at it, trying to clean it off. The vets decided that it had better be removed and sent for biopsy.

The prognosis was grim. The medical records from the surgery had read “Mast cell tumor, grade III, high chance for recurrence, chance for metastasis is high; chance for long-term survival may be only 10% or less.”

In early December 2009 she began to exhibit signs of physical discomfort, though she tried valiantly to hide them and always greeted us with her beatific smile. She had stomach issues at times. Trotting about sometimes left her a bit short of breath. The tumor re-emerged above the surgical scar and began to grow quickly. She ate heartily though, and we spoke at length every day.

On January 4, 2010, Noel refused her morning medication and her breakfast. She and Tonka spent the afternoon in the east dog house, which we had come to refer to as “Tonka’s house” because it was highly unusual for Noel to go in there. It seems clear that certain rites of passage occurred there that day, the transference of knowledge and love and light that we humans typically fail to understand. Several hours later they emerged. I offered a meal of meat but she again refused any nourishment.

Noel and I had our usual chat that evening just before dark, but this time with a different ending. As she began to go, I stated as I had so many times before that she is my mother, my sister, and my daughter, and I professed again my love and support for her, but this time I also dared to ask the question, “Is this the last time I’m going to see you, Darling?” She stopped and turned to look at me over her left shoulder, and bestowed upon me the loveliest smile of universal knowing. She lingered there, not wanting to walk away too soon, wanting to soak me in it seemed, giving me time to do the same. Her laughing eyes became serious. Hers became the eyes of old souls and profound wisdom, and their message was clear. The answer was overflowing with love, and the answer was, “Yes.”