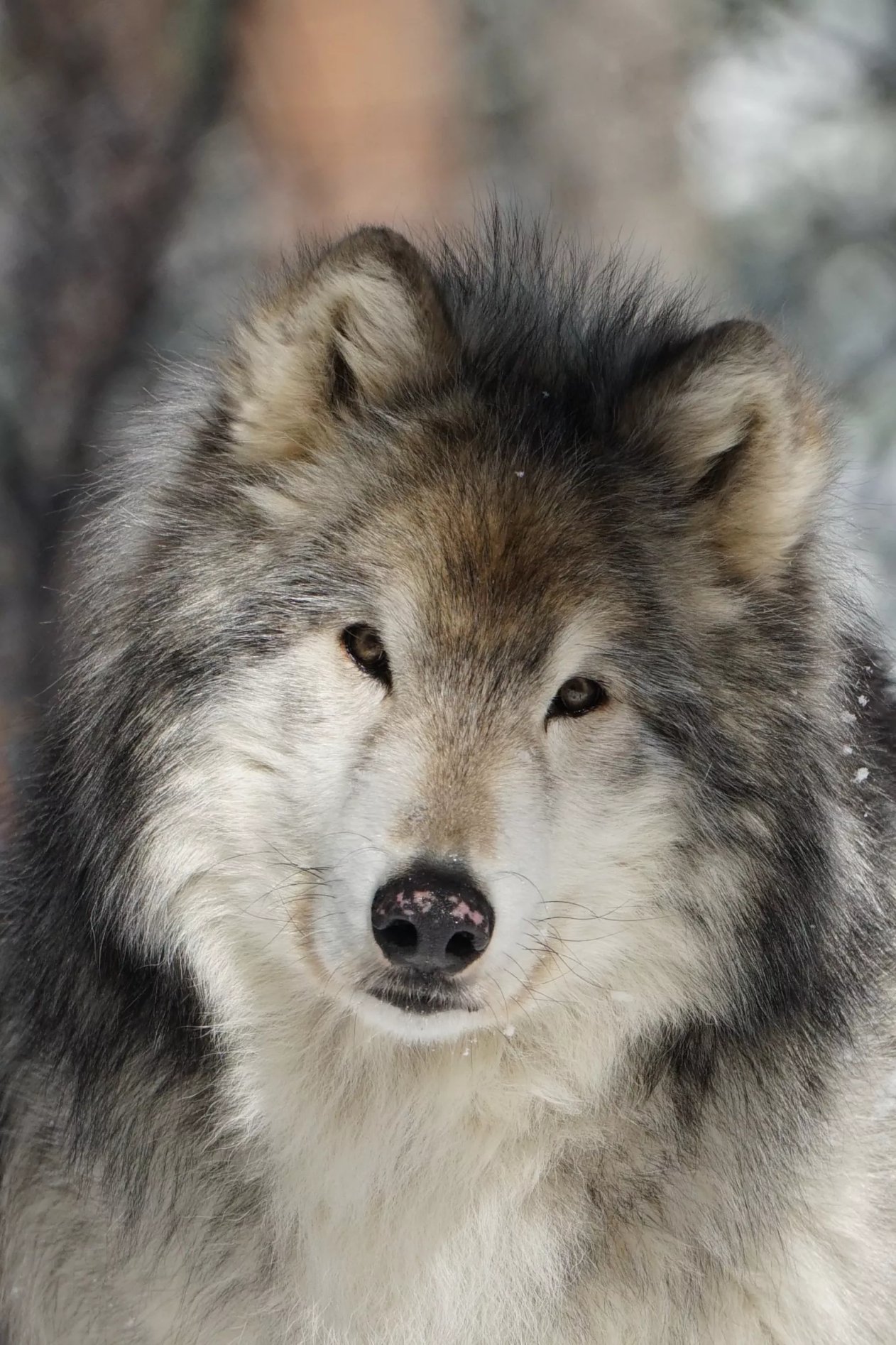 On February 21, 2008, W.O.L.F. received an email from a Humane Society in Truth or Consequences, New Mexico. They had a one-year-old wolf dog who had been at the shelter for five months. The shelter director had fallen in love with him and would have kept him had he not been in an area with strong anti-wolf feelings. At one point, the wolf dog escaped and was free-ranging for a few days, causing more problems and making it imperative that an immediate placement be found for him. Even the local vet threatened to kill him if he was brought in for any treatment. Luckily, W.O.L.F. had space for him. A W.O.L.F. supporter named him Nashoba, which is the Choctaw word for “wolf.” When Nashoba arrived at W.O.L.F., he was very shy with his caretakers. Over time, he was able to overcome some of that initial shyness.

Nashoba’s longtime companion was Isabeau. They were often seen running and chasing each other through their enclosure. Isabeau, who loves some of her humans, tried to show Nashoba that humans are often fun and have good treats. Nashoba slowly warmed up to those who care for him. He approached the fence for treats, even bravely taking them from a spoon! He began to interact more frequently with staff and volunteers. He approached the fence using Isabeau as a shield, and he teased anyone lucky enough to garner his attention. At times, Nashoba leaned against the fence and allowed his caretakers to scratch his back, particularly during shedding season. For a few lucky individuals, he even graced them with a kiss on the face!

As he aged, Nashoba maintained his aloof but curious personality. His bond with Isabeau remained as strong as ever, and even as the two grew less mobile, they still found it within themselves to play with adorable enthusiasm. He was often called the “teddy bear” of the Sanctuary due to his adorable face and fluffy fur coat. Nashoba was a staple of the Sanctuary and was always a consistent, quiet, and comforting presence.

This made it evermore startling the morning of August 13, 2021 when staff noted Nashoba behaving oddly and seemingly having difficulty moving around his habitat. On closer inspection, it became apparent that Nashoba had developed an aggressive wound infection. After having a veterinarian look at him and assess our options, it was determined that the kindest option was to help him pass due to the stress and trauma he would have had to endure for the potential treatments, which would have been invasive and disruptive to Nashoba’s quiet and gentle days at the Sanctuary. He was already more than fourteen years old and had preexisting health conditions that would have made his recovery even more challenging.

With that in mind, we made the painful decision to aid him in crossing the Rainbow Bridge. Everyone fortunate enough to have known this beautiful soul grieves the loss of his presence at the Sanctuary. His sweet and gentle nature will never be forgotten, and he will continue to live on in the hearts of the many that he touched in his thirteen wonderful years at W.O.L.F. Sanctuary.

Peter was very social with humans and enjoyed scent rubbing on them and receiving their attention and scratching. He remained very protective of his mother but his overall personality was that of a big, goofy puppy that enjoyed just about everything that went on in his life.

When Peter became ill, all the cards were stacked against him. He had Cushing’s Disease, the same illness that his mom had died from. Then he developed diabetes, and on top of this, he was hypothyroid. Suddenly, in one day’s time, Peter lost the use of his rear legs and could not get up. We did exercises, even going so far as building a mobile sling to help him move, but it did not help.

We called the vet, and when she arrived we all said our goodbyes to a sweet and gentle creature. We held him as he left his body to join his mother and friends that had left before him.