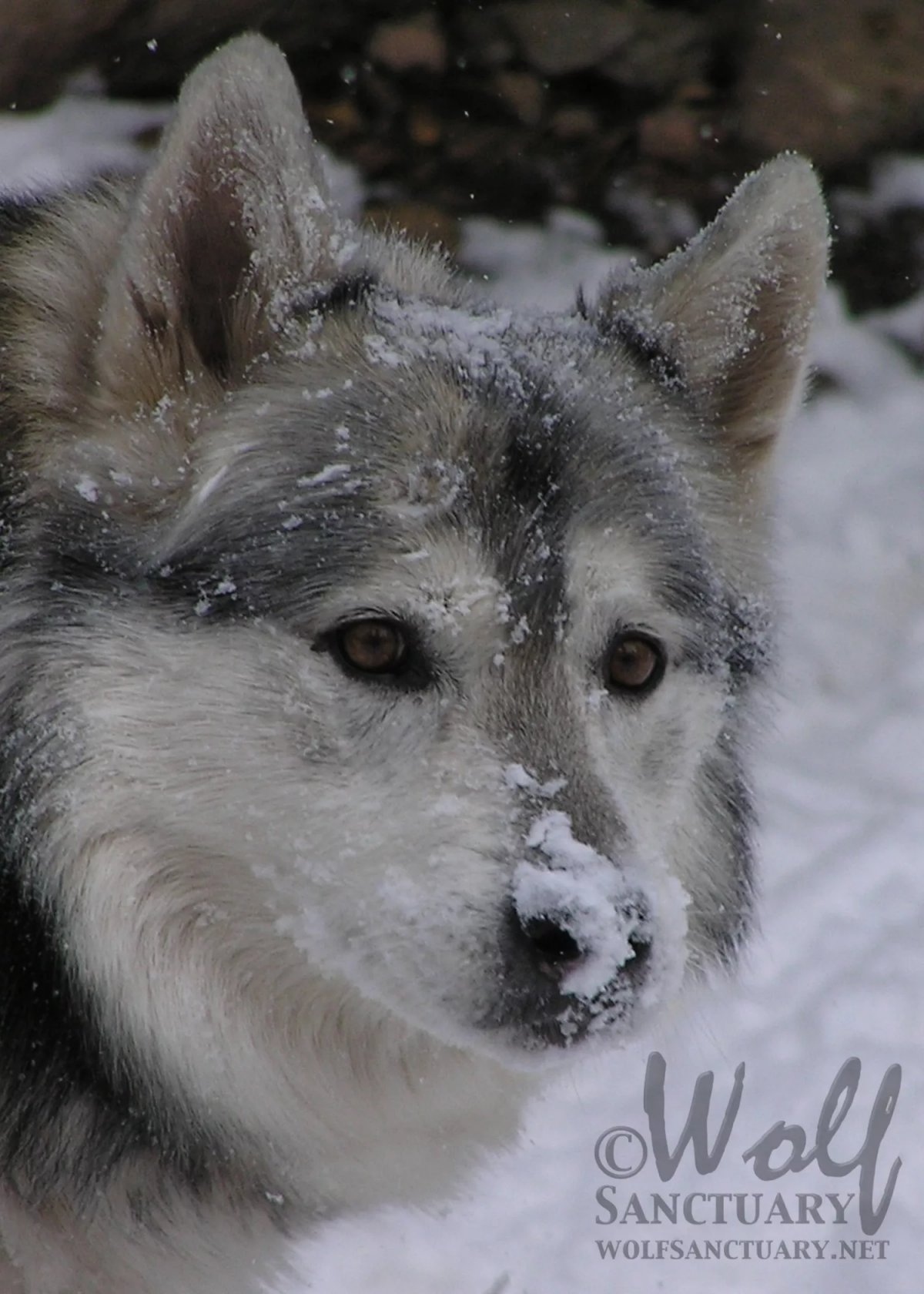 Male
Born: May 1993
Rescued From: Colorado
Given Sanctuary: February 1995
Returned to Spirit: December 20, 2005
In February of 1995, W.O.L.F. received a phone call from a panicked breeder in Boulder, Colorado. She needed a refuge for a seventy pound year-and-a-half old wolf dog that had become a fugitive from the animal control system. Placed in a Denver home at six weeks of age, the wolf dog behaved as a typical family pet until he began to reach maturity. At that time, he began to practice the art of escape and on one of his excursions he killed a neighbor’s cat, a serious wolf dog infraction punishable by lethal injection in Jefferson County. The owner returned Nanook to his breeder in an effort to save him from an untimely death, and the mission was a success, but only temporarily. Nanook was just beginning to adapt to his new home with the breeder when an unfortunate but predictable urge to run wild and free landed him once again on the wrong side of the fence and consequently, the wrong side of the law, when he killed the neighbor’s cat. Now a repeat offender, W.O.L.F. was his only hope.

Faced with yet another new environment, Nanook’s ability to adapt was strained. He was tolerant and well behaved but grieving the loss of two homes and perhaps, in his eyes, two packs. Fortunately, after several months, Nanook felt enough at home to reveal a playful and gentle side. He would raise his leg next to anyone who was stationary, scaring newcomers, even though he was just requesting that his thigh be scratched. He became an integral part of W.O.L.F. acting as an ambassador for educational programs for seven years.

Nanook was diagnosed with boney spondylitis of the spine — a disease where vertebrae begin to fuse together with excess boney-type growth. There were no surgical options to fix this problem, only medication to relieve some of the pain. Although his condition caused him to lose some coordination in his movement, Nanook’s pride and determination would not allow him to cease the activities that he enjoyed. He still climbed the mountain and ran to the gate to demand the attention and respect of visitors.

Eventually, Nanook’s symptoms became worse, and he started needing help to get to his feet and assistance propping up his hips as he made turns. He spent several days sleeping and refused to eat. We tried several medicinal approaches to keep him comfortable, but it was very obvious that he was ready to go. On December 20th, the eve of the winter solstice, we lit candles, played Native American music, and helped Nanook to pass.

Nanook’s spirit molded the philosophies and principles of W.O.L.F. His teachings were unmistakable and timeless. His legacy and inspiration will live on within all of the humans whose hearts he touched so profoundly.