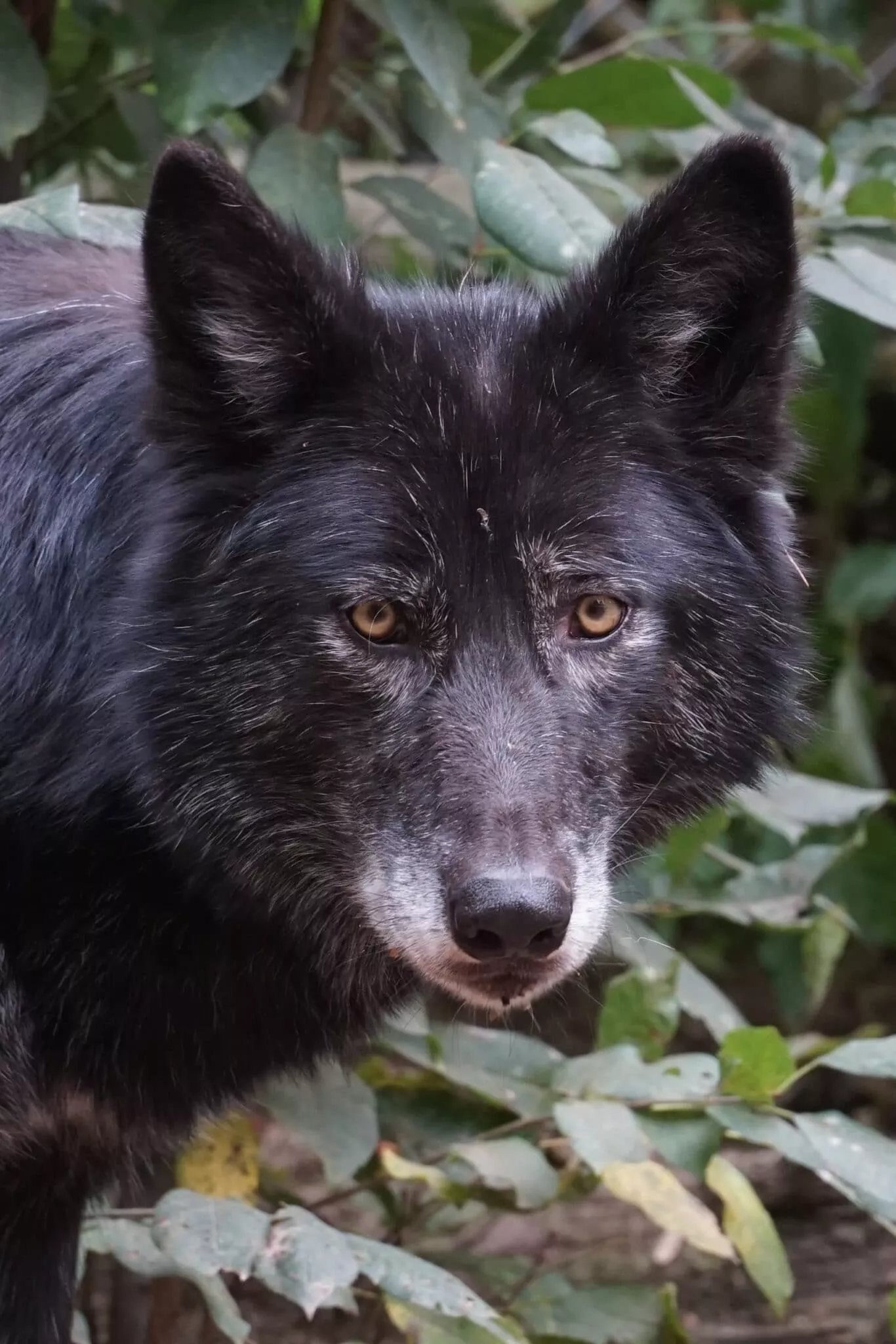 Nala and Akela are W.O.L.F.’s sister and brother duo from Oklahoma. Born on February 1, 2016, they were part of the last litter of pups from a breeder who was transitioning to breeding Siberian huskies. A Good Samaritan known as Scott met the pups when they were eleven weeks old. They were the last remaining pups in the litter still needing placement. Scott realized immediately it would be difficult for the breeder to sell them to a private owner as pets since, in the breeding world, they were considered too old to bond solidly with a human owner. Scott could not get the little black pups out of his mind, wondering what their fate would be. He returned to the breeder and offered to take them both. The breeder, anxious to be done with them, readily agreed, and soon, Scott and his family had themselves two wolf dog pups that were not well socialized with humans. Scott’s intention was to help them: make sure they were healthy, spayed, neutered, socialized, and then find a sanctuary placement where they would be safe. Thus began a fourteen-month journey that brought Scott and the pups to W.O.L.F. on July 16, 2017.

Scott knew immediately that the pups were not good candidates for household companions. Both were very shy around people and were very reserved when approached. Akela was better socialized than Nala, who was distant and frightened. She did consent to take food from a spoon from Scott’s wife and daughters, but she would not interact with Scott. Both the pups loved other animals and would often play with the family dogs and cats.

As is common with wolf dog pups, they were very inquisitive and longed to see what was on the other side of their fence. As they grew, it was a short leap, and they were over the six-foot backyard fence. Scott and his family lived in a rural area, but it caused a commotion with some neighbors with two young wolf dogs on the prowl. Scott contacted an exotic animal expert and a vet to help him catch the animals. Akela and Nala stayed close but proved to be extremely elusive. After a week, Scott was able to catch Akela and bring him home. Nala was loose for two weeks, and she was finally sedated and brought home. Scott knew he needed to do something to help the pups or the next escape might be their last.

He contacted a trainer who used positive training techniques and placed the pups in socialization training for three months. Akela seemed to respond, but Nala did not. While the pups were learning some basic skills, Scott found a new location for them and built a twenty-foot by eighty-foot run with eight-foot-tall fences and lean-ins. The pups’ new home also an indoor space during bad weather or heat. When the pups returned from their training sojourn, Scott realized it was time to find them a permanent sanctuary home. They enjoyed the new enclosure and the other animals around them, but it was no life for these wolf dogs. They needed space to run, to play, and to be around other animals of their own kind.

Scott researched sanctuaries and placements and contacted W.O.L.F. in the process. It is rare that W.O.L.F. has two placements at the same time or that it would be possible to keep the two siblings together. But the stars must have been aligned perfectly for Akela and Nala, because that is what happened. Because of the recent passing of Sigmund, Odin, and Makoce, there was room at the Sanctuary to take both Nala and Akela and to keep them together.

On a beautiful July morning, Executive Director Shelley Coldiron and the staff met Scott after his overnight drive from Oklahoma. Nala and Akela were settled peacefully in side-by-side crates for the long journey. At the Sanctuary, Scott and the staff carefully unloaded the crates and placed them in the enclosure that would become home to the siblings. They simultaneously opened the crate doors, and both animals bolted out and immediately ran up the side of the mountain to begin exploring their new digs. They spent the afternoon running, sniffing, and playing in their huge new mountain home. Scott and staff saw their gorgeous shiny black coats flashing in and out of the greenery as they ventured into their new world. They watched with awe as the young wolf dogs made the space their own. There were a few tears from the humans as these beautiful animals began the transition from Oklahoma to Colorado with seeming ease.

Scott, the Good Samaritan, had accomplished his mission. The two wolf pups that he rescued from an unknown fate were now safe in sanctuary, and they would never be at risk again. Since her arrival at the Sanctuary, Nala has grown much more confident. While she does not allow petting, Nala will regularly approach her caretakers from behind to sniff them if they remain very still, sometimes licking or repositioning their clothing in the process. She is still shy, but her comfort in her home is clear. She and Akela enjoy playing with each other and with their neighbors through the fence. They are a striking pair and a perfect match.