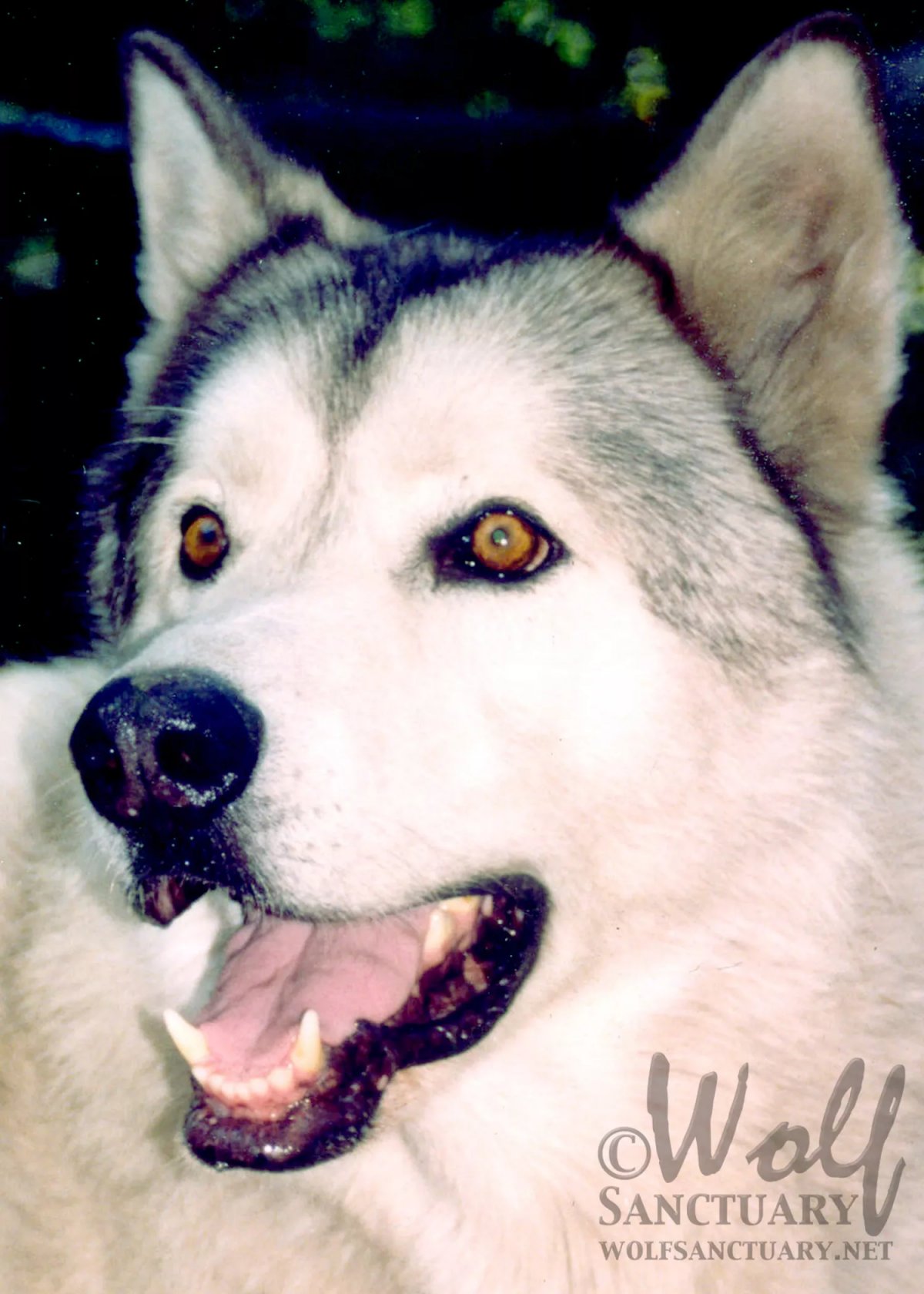 Male
Born: April 1998
Rescued From: Colorado
Given Sanctuary: December 27, 1998
Returned to Spirit: August 26, 2003
Mesa’s story as we know it began in Grand Junction, Colorado when the Mesa County Animal Control picked him up as a stray. Luckily for Mesa, the animal control officer who brought him in, Cindy, took a special interest in him.

When Mesa was captured, it was apparent from his physical condition that he had been on his own for a long period of time. Mesa was basically starving to death and in the dead of winter his fur was falling out in handfuls. Cindy took it upon herself to look after this scrawny puppy.

As the days went by, Cindy became more and more concerned that his owners were not going to come forward and claim him. Cindy convinced her superior that Mesa was too magnificent an animal to be destroyed. Normally wolf dogs, if unclaimed by their owners, are not put up for adoption. The liability involved causes most humane societies to destroy any suspected wolf dog. Unfortunately, this leads to the death of thousands of animals across the United States. Cindy went to work trying to find a sanctuary for Mesa, and after several weeks of fighting for Mesa’s life, Cindy located W.O.L.F.

When we first saw him, Mesa was nothing but skin draped over bones. He was shedding so fast we were afraid he might freeze in the snow. Our dismay grew as Cindy explained that he refused to eat much of the time. Immediately we scheduled an appointment with our veterinarian to do a complete check on Mesa as we needed to know what we were dealing with in order to keep him alive.

Other than being extremely underweight, Mesa passed his exam. We became very creative in feeding Mesa, getting left over prime rib from a local restaurant, giving him roasted chickens donated from the grocery store and mixing them with a special prescription dog food. Most animals would give just about anything to be fed the delicacies we were attempting to feed Mesa, but Mesa either was in a lot of pain or afraid to eat. It became necessary for us to force feed him, slowly putting small amounts in his mouth and holding his mouth closed until he swallowed. Gradually over a three-and-one-half-month period Mesa become stronger. He started to eat on his own, began gaining weight, and his fur started to grow back. Eventually, Mesa became one of the sanctuary’s ambassador animals.

One day, volunteers noticed that Mesa was very lethargic and out of sorts. We took him to the vet hospital and he was diagnosed with acute pancreatitis. The doctors believed that his digestive enzymes were out of control and actually digesting his pancreas. The treatment plan was to perform surgery to flush his digestive tract and then implant a feeding tube that would bypass the pancreas altogether, allowing it to heal. When the vets opened Mesa up, they discovered a tumor the size of a cantaloupe had enveloped all of the organs and tissue surrounding his pancreas. The tumor was inoperable and the prognosis suggested that he probably only had a few very painful days left to live. We made the decision not to put him through that and helped him to pass.