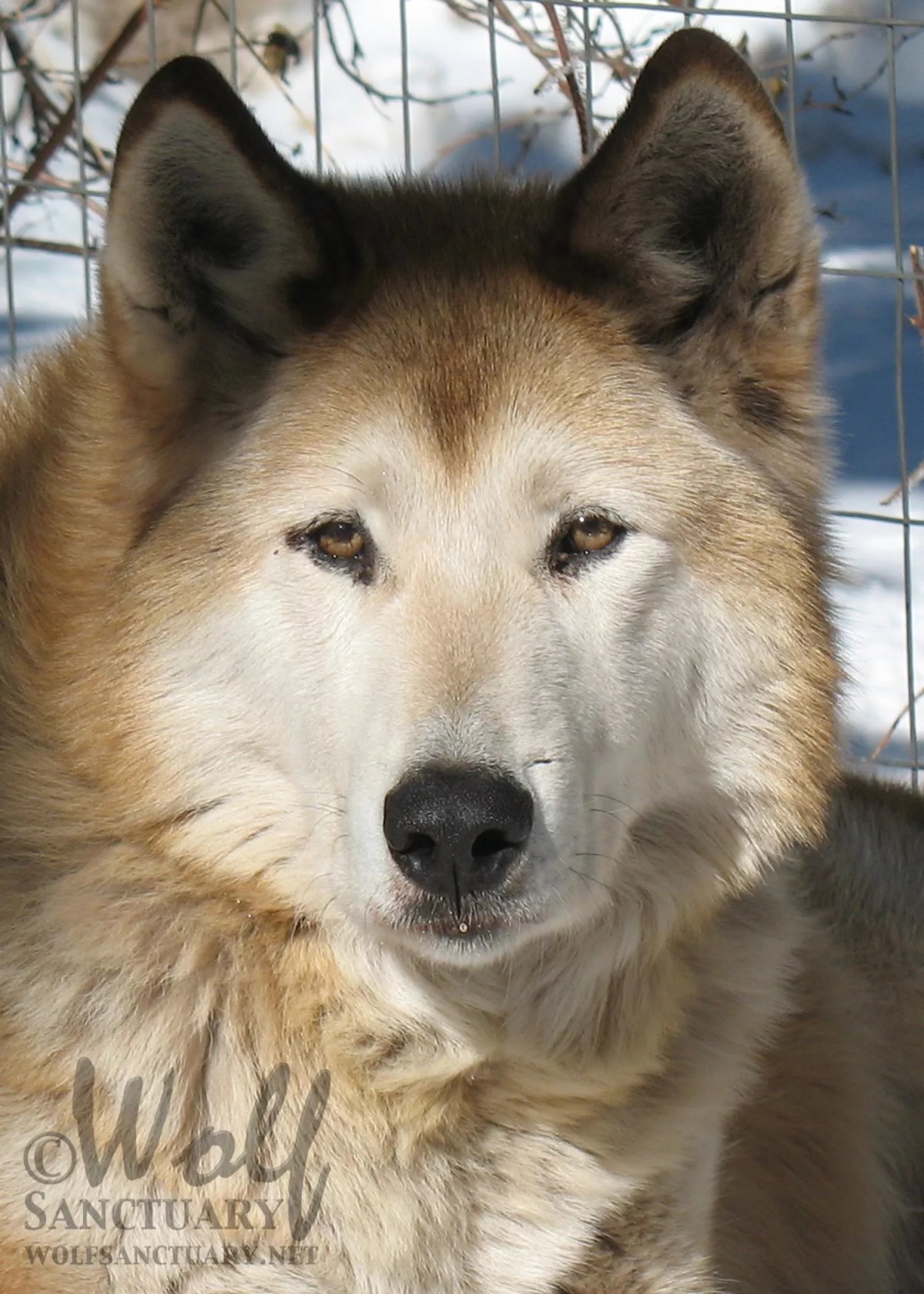 Male
Born: April 28, 1997
Rescued From: Vermont
Given Sanctuary: September 24, 1997
Returned to Spirit: May 21, 2010
Merlin’s time as a pet did not last long. At just six weeks of age, he had already proven to be too much of a handful for his original owner, and he was surrendered to a vet clinic. After several months at the clinic, Merlin arrived at the Sanctuary as a large and rambunctious 5 ½-month-old puppy.

Merlin was introduced to a wolf dog named Zeke and a puppy his age named Artemis. The three of them hit it off immediately, and although Zeke was removed from the group early on due to medical reasons, they remained good companions. Merlin was very protective of Artemis for his entire life.

Due to his massive size (137 lbs.) and playful nature, Merlin developed a friendly and exuberantly mischievous reputation that made him an instant favorite with staff and volunteers. He was known for chewing on anything a careless human might bring into his enclosure. Hats, hair ties, shoelaces, jackets, everything was fair game.

Being a sucker for a good ear scratch, Merlin loved attention and would often block the gate to prevent people from leaving. Because he was so friendly and excited to go for walks, Merlin became one of W.O.L.F.’s ambassador animals, attending programs at schools, public events, and campgrounds to help educate people about the independent nature of wolves.

In January 2010, Merlin developed a lump on his left front leg. X-rays revealed that Merlin had osteosarcoma, a form of bone cancer, in his wrist. At nearly thirteen years of age, the treatments for the cancer (amputation and chemotherapy or radiation) were not an option, and he was brought home to live out the rest of his life. Though the mass continued to grow slowly, Merlin remained happy and active. He enjoyed basking in the sun and tricking volunteers into feeding him an entire can of wet dog food with a sad look and a little whimper.

Around the second week of May it became obvious that the painkillers were no longer working effectively, and the mass on his wrist began to grow rapidly. Merlin started to stay to himself more and more, even refusing to eat his favorite kinds of dog food. On May 21st, Merlin gave us permission to assist with his passing, and he did so peacefully with Artemis by his side.