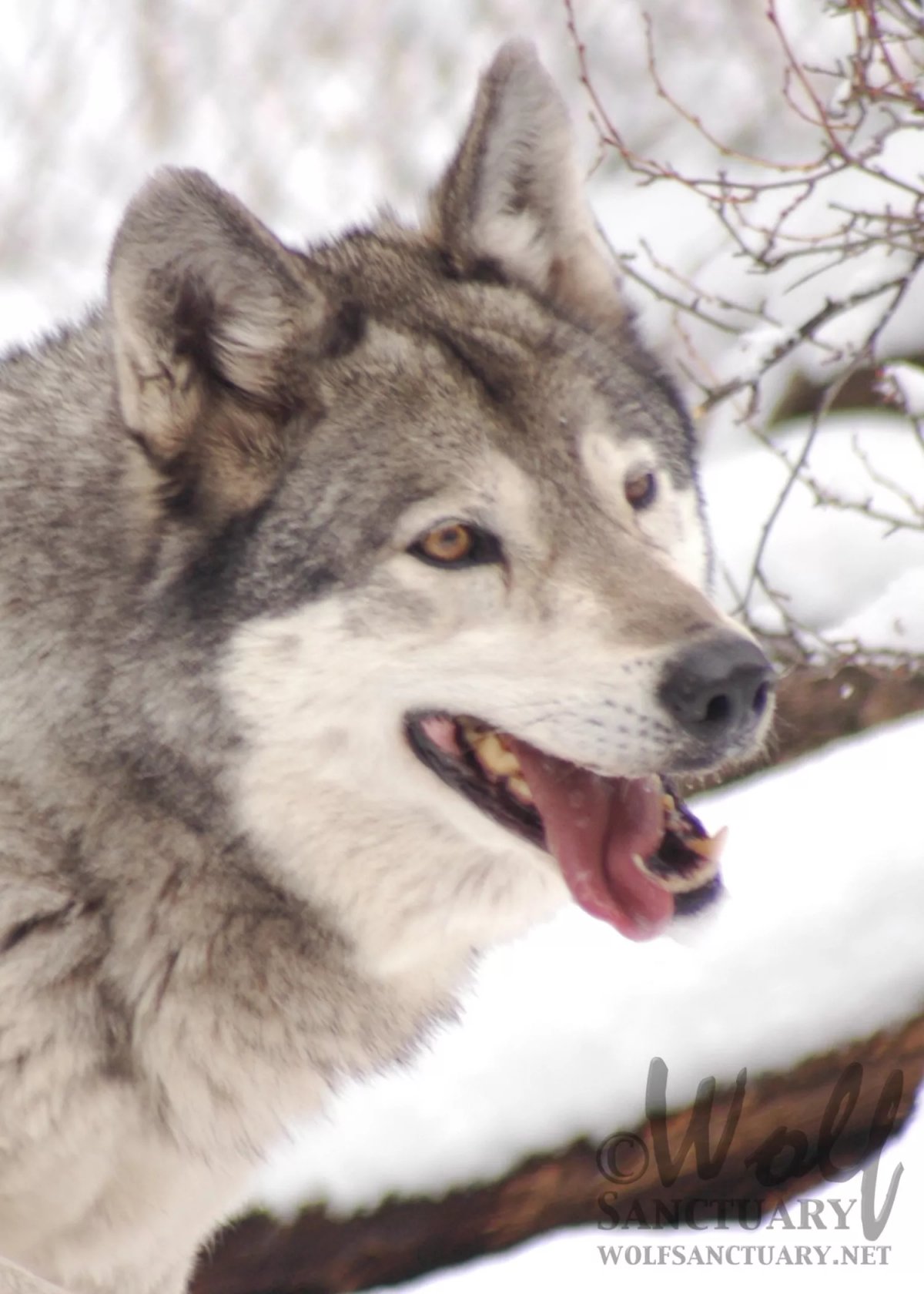 Female
Born: December 12, 1999
Rescued From: Wisconsin
Given Sanctuary: June 1, 2006
Returned to Spirit: August 28, 2008
Menemith was one of eighteen wolf dogs rescued in 2006 from a horrendous backyard breeding operation in Wisconsin. The owner of the operation had become seriously ill, leaving the animals living on chains with no food or water. W.O.L.F. received a call from the Humane Society asking if we could take the animals, and the Wide Awake Rescue began. Unfortunately, even the rescue would turn out to be a horrible experience for the animals. We had been told that they would be transported in an air-conditioned trailer and that a vet tech would accompany them in the event of an emergency. Instead, the animals were packed into a horse trailer so tightly that not even water could be given to them.

When the animals arrived at the Sanctuary, we immediately set about making them as physically and emotionally comfortable as possible. Menemith was paired with Webster, and her life settled into a healing pattern for a short time. Then an early fall storm dumped 18″ of snow and Menemith broke her leg (we think she may have got her leg caught in an obstruction hiding in the deep snow).

After a full exam and x-rays, it was determined that she had a very severe humeral oblique fracture that required surgery. Her surgery went well, but the amount of fur removed for the procedure was extensive. It would be necessary to provide her with a warm area in which to recover. A heated doghouse was built for her, and she was moved to a remote enclosure with her companion where she gradually recovered.

Menemith remained extremely afraid of people, but she thrived in her mountainside habitat where her favorite spot was under a large rock with a great view of the entire Sanctuary. After a routine vet procedure it was decided that Menemith was healthy enough to be spayed. She was caught up, examined, and taken into a mobile clinic. Menemith’s surgery was complicated from the beginning. She appeared to have a mammary tumor, which had to be removed before she could be spayed. She bled very heavily during the procedure, and the surgery took longer than anticipated. It appeared that she was much older than we believed and may have been in the beginning stages of a heat cycle.

We could not get Menemith to wake up from the anesthesia in spite of repeated stimulation. The vet stayed with her for a few hours and then a staff member volunteered to stay with her overnight. At 2:20 am, Menemith’s breathing changed and she let out a few whines. As her caregiver jumped up to see what was wrong, her breathing became increasingly rapid and then stopped altogether. Menemith had lost her battle.

After giving Webster time with Menemith’s body in the morning, we took her in for a necropsy. The results showed there was no surgical error and all of her blood tests were good. Menemith had experienced a rare and not well understood condition called hemorrhagic gastroenteritis or massive spontaneous bleeding into the GI tract. There is nothing that can be done for an animal when this occurs.