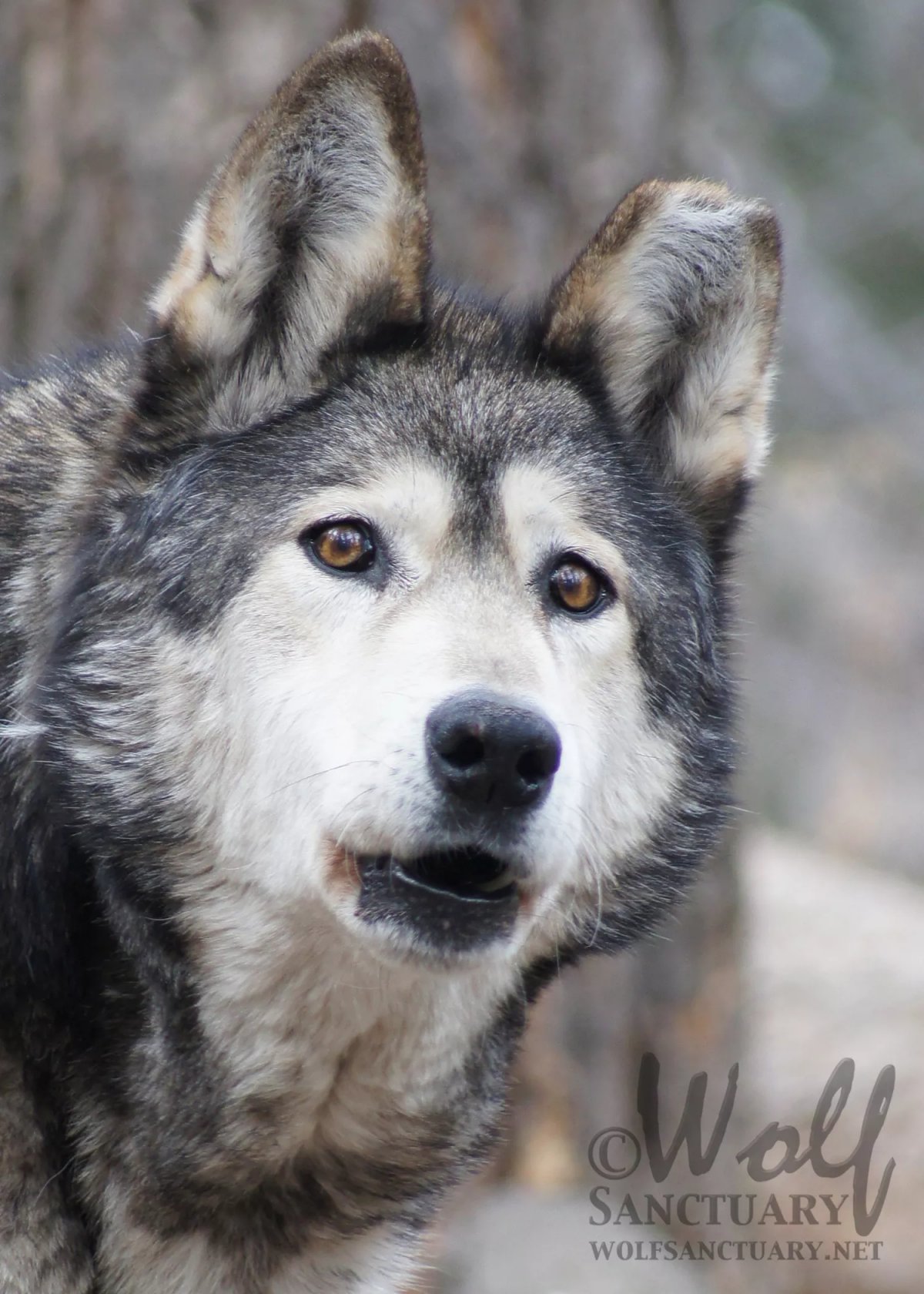 Female
Born: March 1, 2000
Rescued From: Washington
Given Sanctuary: July 28, 2000
Returned to Spirit: September 24, 2013
Meeka arrived at W.O.L.F. in a fashion that broke all of our rules for potential placement. Her owner had several wolf dogs, and called inquiring about placement possibilities. He was getting a considerable amount of grief from his neighbors and was afraid that the animals would be confiscated and killed. We explained that we currently did not have space for any animals and gave him the names of some other sanctuaries and an internet site to check out for a listing of rescues.

Several weeks after this call, the owner showed up at the Sanctuary with Meeka and her two litter mates, Matoskah and Tala. He was adamant about the peril the animals were in and the absolute need to get them placed. Although we were hesitant to respond to this type of approach, we did not want to penalize the animals for the actions of the human and decided to accept them.

Meeka and her sister, Tala, were placed at the foster home. They lived there comfortably for many years, with Tala first occupying the alpha role and then Meeka. In early 2010, space finally opened up at the Sanctuary to bring the two girls home. We had two males who both needed a companion female, and we figured that would be the perfect solution. Tala, we decided, would go in with Lakota while Meeka would go in with Tonka, another foster animal we had recently brought to the sanctuary.

Meeka did well when we introduced her to Tonka, greeting him and following him around the enclosure until he went and hid in the doghouse. She also socialized with her sister through the fence.

For the most part Meeka was happy with her new arrangement but Tala was not. After a week or so it became obvious that Tala was not calming down and needed to rejoin Meeka. We were hesitant to put them back together, and when she was finally moved, we watched closely, ready to jump into action if a fight broke out. Much to our surprise, Meeka said a brief hello to her sister and Tala went to join Tonka in his doghouse.

The group got along famously and there weren’t any arguments between the two girls. They enjoyed their large enclosure and their handsome companion. Meeka loved to stand at the top of her enclosure and bark enthusiastically at any human that walked by.

In 2013 Meeka was diagnosed with a anal sac tumor and taken into the vet to have it removed. The operation went smoothly and all of her blood work came back good so it came as a shock two months later when staff found Meeka had passed away unexpectedly during the night. What had gone wrong? She had been fine the day before and there had been no evidence of the cancer metastasizing or returning. Meeka was taken to CSU vet hospital for a necropsy and it was determined that her cause of death was entirely unrelated to the cancer and was nothing we could have diagnosed or prevented before hand. She passed away of GDV, a common, little understood condition in large breed canines.