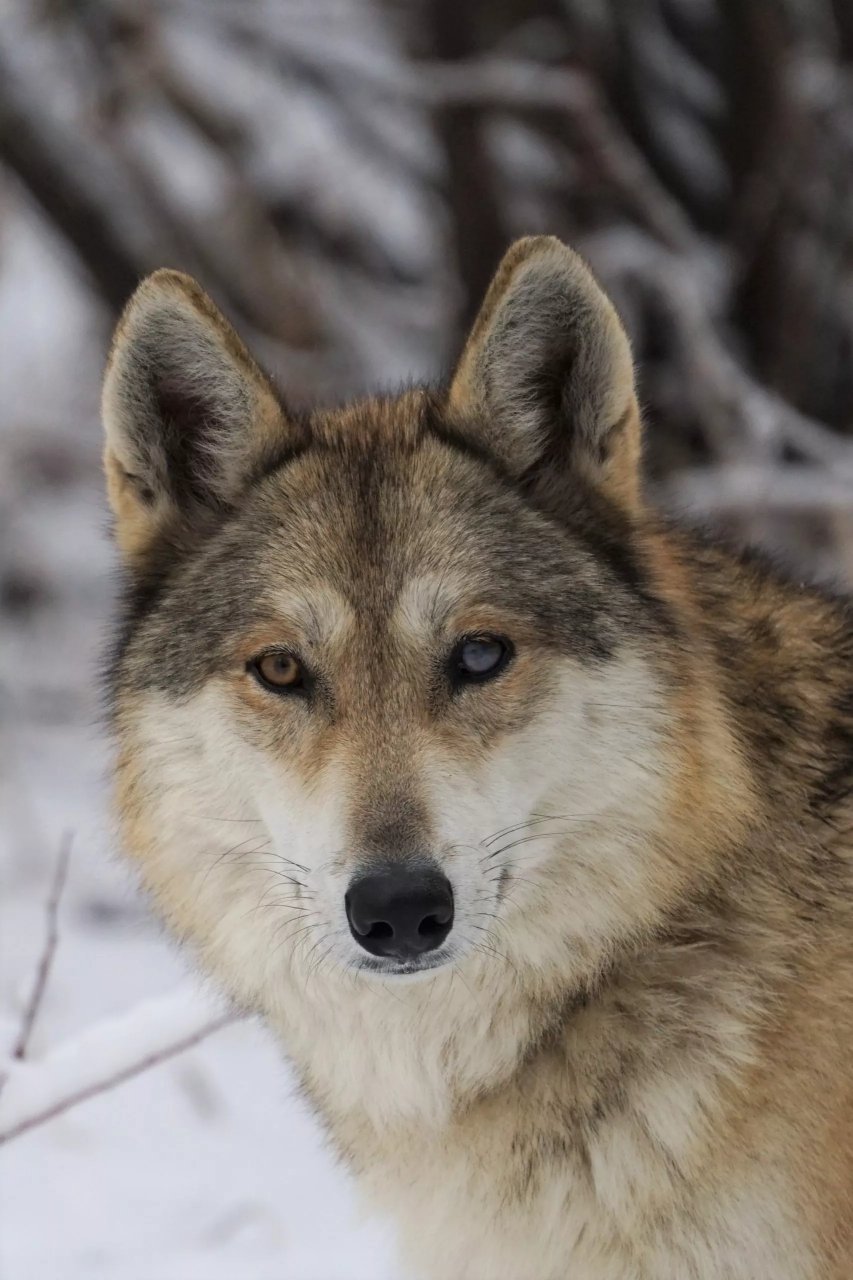 In mid-November 2020, W.O.L.F. received a call from one of our rescue partners in California: Apex Protection Project. There was a female wolf dog who had been running as a stray in Southern California since Labor Day who was in need of a permanent home. She often visited a compassionate couple, and they fed her and tried to keep her safe, though they were unable to touch her or get a leash on her. She stayed close to their home on a beautiful multi-acre property. The couple often saw her jump into their pond, run several laps around their yard, and then curl up under some thick bushes to take a nap. Eventually, she began to follow the wife around the yard as she gardened. She would disappear at night and reappear early in the morning.

While caring for her, the couple actively searched for her owner and discovered that the wolf dog previously had a home, albeit not a good one. She had been kept on a nearby property in a small horse stall for a year. She was never walked, and the owners only visited her to feed her once each day. There were other wolf dogs on the property, but the female stray was not allowed any contact with them. Eventually, the house was sold, and the owners moved away, leaving her behind. The new home owners called to have them come collect their animal, and while the previous owners agreed to come back and pick her up, they never did. Eventually, they even refused to return calls or texts. It was clear the wolf dog was on her own.

As the weeks went on, the wolf dog kept coming for feedings, and the couple realized her life was not as easy or carefree as she made it seem. Late one evening, they heard a ruckus outside their bedroom window, and the husband rushed outside to see what was happening. The wolf dog was cornered by three coyotes, who were snapping and lunging at her. A fourth coyote stood to the side and watched. While the husband chased the coyotes away, the wolf dog stood at his side and accepted his protection. When the couple reviewed the film on the trail camera, they saw that the wolf dog had been able to hold her own. She charged and lunged at the coyotes and forced them to back up.

Shortly after that altercation, she came into the yard with a serious eye injury. She was unable to open her left eye, and it appeared to be bleeding. The couple could not catch her to get her to a veterinarian, so they decided to put antibiotics in her food to help with the infection that was apparent. In the coming days, the eye seemed to improve, and the wolf dog was gradually able to open her eye. However, the couple saw that the lens in the eye was completely clouded.

They became increasingly worried that the wolf dog would be hit by a car or shot if left running free. They contacted a local wolf rescue, and Apex was able to organize a catch-up plan. They moved a wire enclosure onto the property and asked the couple to begin feeding the wolf dog inside the enclosure but to leave the door open. At first, the wolf dog went into the enclosure but took her bowl of food outside to eat. Eventually, she started to eat in the enclosure. On the day of the catch up, the husband fed the wolf dog and started to close the enclosure door. The wolf turned, saw the door closing, and quickly slipped out the door. When the team from Apex arrived, they began the laborious process of catching her on the multi-acre property. Eventually, they were able to lure her into a smaller garden area, she ran into a greenhouse, they closed the door, and she was finally safe.

W.O.L.F. had been looking for a female for Castiel since Bella’s passing, and this stray was the perfect candidate. Apex transported the wolf dog to a temporary foster home, and the W.O.L.F. transport team headed to California to bring her home. She was nervous but very good on her transport. They named the wolf dog Mayari after the one-eyed moon goddess of beauty and strength who was a warrior. The first stop in Colorado was to W.O.L.F.’s veterinarian, who did a thorough exam and gave her all of the necessary vaccinations. She determined that Mayari was approximately one and a half years old. The next stop was Mayari’s visit with a Board-Certified veterinary ophthalmologist who examined her eye. While she did not have any lingering infection and the damaged eye was not painful, he determined that she was totally blind in that eye.

After an exhausting two days of travel and veterinary examinations, Mayari arrived at W.O.L.F. on November 23, 2020. She was nervous with her new surroundings and overwhelmed with the number of wolf dogs she suddenly found near her, so it was decided that she needed at least a few days to settle into her new home before trying to introduce her to Castiel. They were placed so that they could interact through a fence if they wanted to while she adjusted. Mayari quickly adapted to the new routine with her caretakers and would often curiously watch them perform chores or follow them at a safe distance around her habitat. She also quickly learned that her caretakers often came with food and began racing over to her feeder whenever she would see one walk down the road in hopes of getting a treat.

It took longer for her to become comfortable with the other wolves around her, but after a week, it was decided that it was time to try a face-to-face introduction with Castiel. They were moved into a new habitat so neither one would feel that their territory was being invaded by the other and were set loose. Much to the surprise of staff and volunteers, Mayari was not shy about interacting with Castiel and desperately wanted to play with him. Castiel remained aloof, more interested in exploring his new habitat and avoiding his caretakers than interacting with her. It quickly became apparent that while their relationship might not be one of love at first sight, the two were safe to be left together unsupervised.

Since then, though no playing has been observed yet between the two, it is rare to see one without the other nearby. Mayari, who is still aloof but interested in her caretakers, seems to have given Castiel a much-needed confidence boost, and he will often choose to remain close to her when their caretakers go about chores rather than running to the farthest corner of his habitat to pace or hide away. We are very hopeful that their relationship will continue to strengthen over time and they will become true friends and companions.