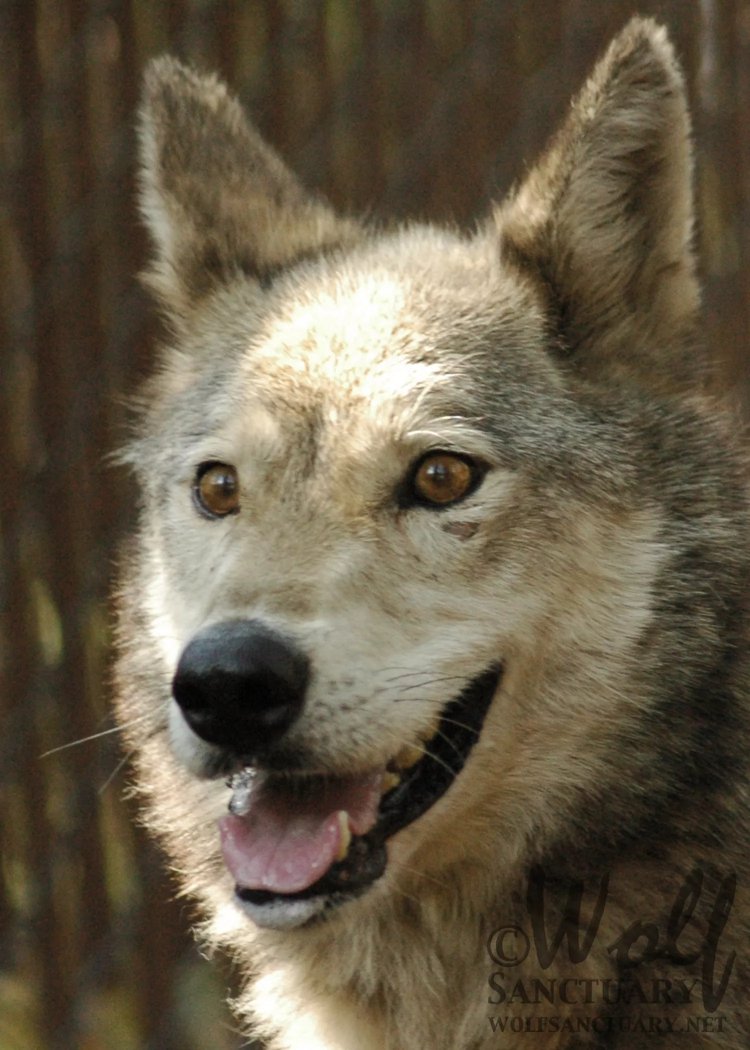 Love Girl was one of eighteen wolf dogs rescued in 2006 from a horrendous backyard breeding operation in Wisconsin. The owner of the operation had become seriously ill, leaving the animals living on chains with no food or water. W.O.L.F. received a call from the Humane Society asking if we could take the animals, and the Wide Awake Rescue began. Unfortunately, even the rescue would turn out to be a horrible experience for the animals. We had been told that they would be transported in an air-conditioned trailer and that a vet tech would accompany them in the event of an emergency. Instead, the animals were packed into a horse trailer so tightly that not even water could be given to them.

Furious about the way these animals had been treated on their journey, W.O.L.F. volunteers immediately started to unload them and place them safely in their new home. Love Girl was paired with Boots, another animal from the same rescue. At first, severely traumatized, Love Girl shrank from human contact. Over the following months, she gradually relaxed and would eagerly take treats from our hands. In her elegant, feminine way, she would sit with long legs crossed, licking and cleaning herself as a volunteer or staff member sat beside her and Boots.

On Sunday, February 4th, 2007, only eight months after she was rescued from the breeding operation in Wisconsin, Love Girl was found struggling to control her hind legs. She also seemed to be in pain and was very obviously “disconnected.” We gave Love Girl a sedative and left her enclosure. When we came back, we found her curled up in Boots’s usual corner. Boots was curled up beside her, staring back at us. We left the two companions together for a time to allow Boots to come to some closure with her passing. As it was getting dark, we hiked out of the enclosure, pulling Love Girl’s beautiful, long body along on the sled.