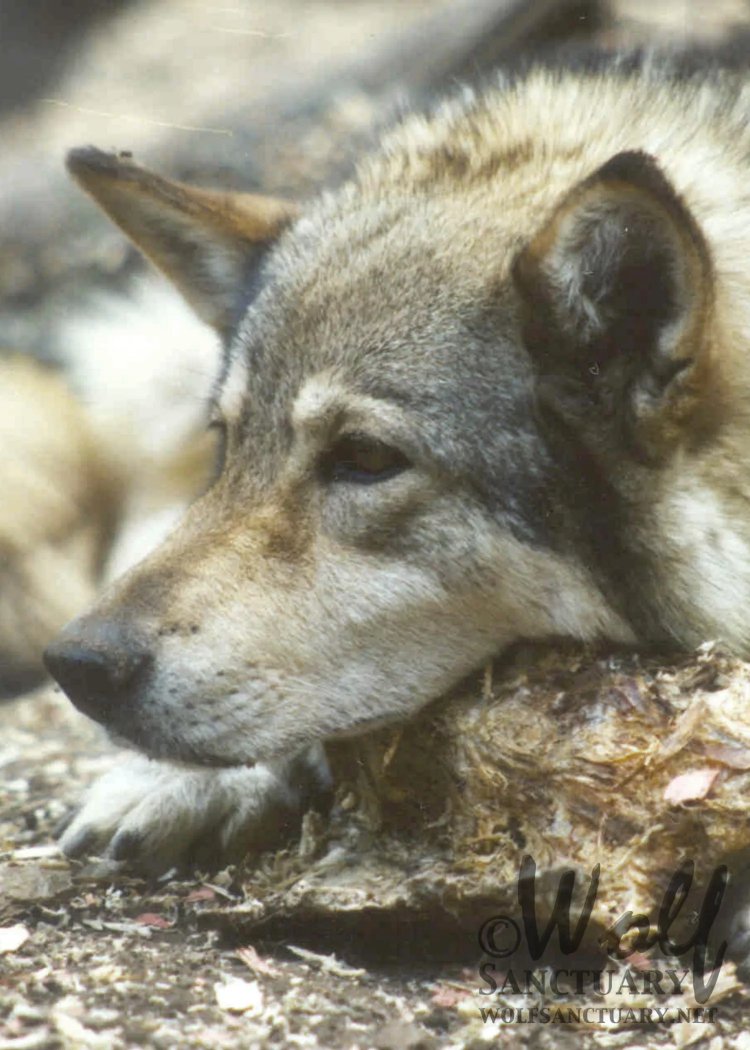 Female
Born: 1986
Rescued From: Colorado
Given Sanctuary: August 22, 1995
Returned to Spirit: September 14, 1998
A caring couple who ran an animal shelter in Castle Rock, Colorado brought Lara to W.O.L.F. She was a stray wolf dog who had been picked up by animal control. Her condition was deplorable, and contrary to policies that prohibited the shelter from harboring a wolf dog, the couple had been nursing her back to health for several weeks. In order to save her life, they needed to get her out of the shelter and placed at a sanctuary as quickly as possible.

Lara was in terrible shape. Her tail was broken, her hair was falling out in clumps, she was emaciated (at least 40 lbs. underweight), she walked very far back on her feet (not on her toes the way canines are supposed to), and she had large, bloody scabs on the tips of both ears from fly bites. Lara appeared to be somewhere around seven to nine years old, but it was difficult to tell due to her condition. Her disposition, however, was wonderful. She looked like she was on an outing, bouncing, excited, and happy to meet these new people.

As the months progressed, Lara’s major physical problems healed as she gained 45 lbs., grew a luxurious coat and was healthy enough to keep the flies away from her own ears. It was time to place her into an enclosure with another animal.

Lara and Sasha were introduced to each other, and the bonding process began. Sasha was very eager to play, and Lara kept him in his place. Their pattern became one of devoted attention by Sasha and short bursts of tenderness followed by aloofness from Lara. Later, Zeke was introduced to Sasha and Lara and became the companion that Sasha needed, providing him with endless hours of play. For Lara, Zeke was a pesky little puppy that she had to continually put in his place.

It was suspected that Lara’s hips were damaged from malnutrition, as she never was able to walk correctly on her toes. Even though pain medications such as Rimadyl were disguised in meat treats, Lara would have nothing to do with anything being offered by hand. In fact, she would disappear into the recesses of her doghouse.

Shortly after her third year at the Sanctuary, Lara experienced a stroke. She was seen by the vet, prescribed medication, and put into an isolated enclosure to recuperate. Two days later, Lara was found dead in the early morning, apparently from another stroke.