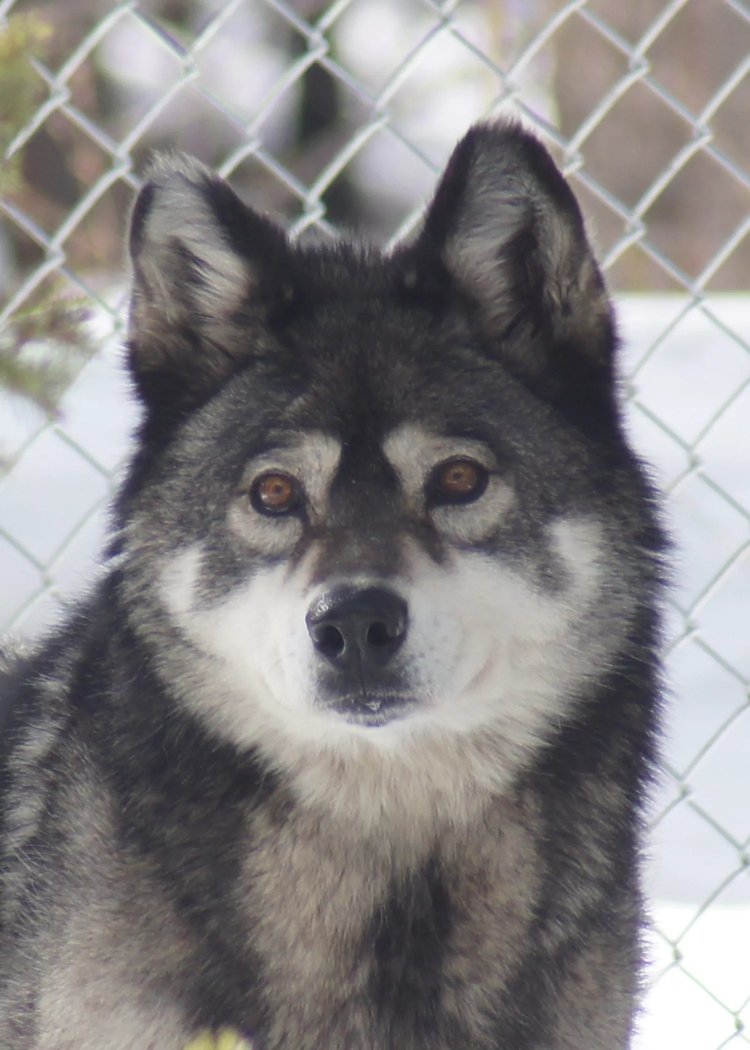 By now Lance’s story before coming to W.O.L.F. is a familiar one. A breeder who did not take good care of her animals suddenly found that she couldn’t keep the wolves anymore, so the question became: kill them or give them away? For Lance, this question was asked in May of 2006 when the owner of the breeding facility in Wisconsin died suddenly, and the animals were left in the care of the local humane society. Lance was one of the 18 animals who were deemed “saveable” enough to try to nurse back to health.

When we were contacted about them, W.O.L.F. did not have room at the Sanctuary but knew Lance and his companions had very little chance of getting placed elsewhere. Because of this, we decided to set up a temporary facility in another county until they could be brought to W.O.L.F. So in June of 2006, Lance and his 17 companions made their way to Colorado.

Initially, Lance was paired with a female from that rescue named Luna. Both were unsocial but, considering their history, this was not unexpected or unwarranted behavior. They were allowed as much space away from people as possible. At first, Lance would frantically run his enclosure whenever anyone got near, but eventually he began to relax into his new surroundings. Luna was always the bold one of the group, and Lance was more than happy to let her be his defender.

Unfortunately, in October of 2008, it became necessary to shut down our secondary facility suddenly. Lance and Luna had to be moved to W.O.L.F. The move was very stressful and seemed to set his recovery back. Eventually, Lance calmed to the point where he would not pace continually when his caretakers would walk by. He also loved to get meat and would often hover just outside of a ten-foot radius of the volunteers to try to snatch up the best piece of meat before Luna did.

When Luna died in early 2010, Lance was paired with another female from the same rescue named Pride. We had hoped that Pride, who had become moderately social since their rescue, would continue to help Lance become more confident around his caretakers. Although this did not happen, Lance and Pride soon became inseparable. Wherever one was, you would be sure to find the other. Content to spend most of their time observing from the top of the enclosure, Lance was most often found watching the goings on around him from his favorite bush.

In July 2015, we discovered a number of masses during his routine wellness exam. Concerned about the possible causes, Lance was immediately brought to Wellington Veterinary Hospital for a more in-depth exam. What we discovered broke our hearts. The masses were cancerous and, judging from the ultrasound, had already spread into his lymph nodes. Because of his age and the fact that the cancer already showed evidence of spreading, it was decided not to surgically remove the tumor and, instead, try to manage his condition and provide comfort as best as possible with medications.

Lance lived a happy, energetic life for almost a year after he was diagnosed. His appetite and activity levels remained high, and he showed no signs of being in pain. In early May, we noticed Lance was not as interested in coming down for his meat and seemed to be having trouble walking. It quickly became apparent that something drastic had changed suddenly with his condition, and a vet was called to come out to take a look. When the vet saw him, she new the situation had become unmanageable and suggested we help Lance pass. He was helped to cross the Rainbow Bridge with Pride nearby.