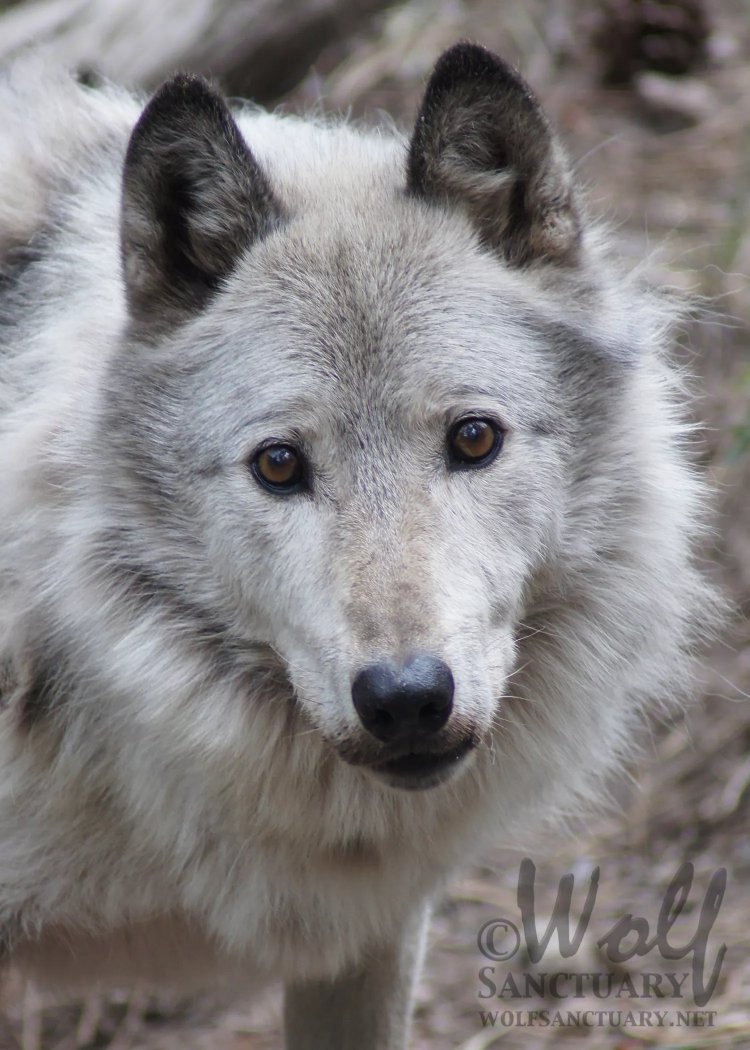 Female
Born Apr-99
State Alaska
Second Chance 25-Jul-00
Deceased 8-Jun-13
Kiki’s story began in a suburb of Anchorage when some residents noticed a young wolf crossing a frozen lake. They did not give the incident a lot of thought until they noticed the animal had a collar around its neck and realized it was not a free-ranging wild wolf.

They contacted a representative from the Alaska Wildlife Alliance to try to capture the animal. The Assistant Director of the Alliance spent hours at the lake trying to get Kiki to come to her for food. When the assistant showed up with food, she made a loud calling sound to attract the animal’s attention. She tried different sounds, but “ki-ki-ki-ki-ki-ki” worked the best.

After a period of observation, it became obvious that the collar was much too small and plans were made to dart her. Upon her capture, it was immediately apparent that Kiki had been free ranging for some time. Her collar was embedded up to an inch into the skin around her neck. Her neck was infected and threatening her life. There was so much damage that plastic surgery was required once the collar was surgically removed.

The Wildlife Alliance employee called a friend and supporter who lived in the San Francisco area and had experience with wolf dogs. The friend agreed to take Kiki. She had a new enclosure built and began the process of trying to find a companion for Kiki. Unfortunately, every animal that was introduced to her wanted nothing to do with the obviously pure or high-percentage wolf.

By chance, one of the Board members of the Alaska Wildlife Alliance was an old friend of the co-founder of W.O.L.F. and suggested calling the sanctuary. Kiki arrived at the sanctuary and began her isolation period to ensure her health while allowing her to become accustomed to her new environment and caretakers. A young male named Matoskah arrived at W.O.L.F. while Kiki was still in isolation, and it was decided to place both young animals with Bear. The introductions went very well and the two pups followed Bear’s every move and instruction.

After Bear’s passing, Kiki and another Sanctuary resident, Spirit, were paired and lived together happily until Spirit’s passing left her alone. Luckily, a male near her age needed rescuing, and Kiki got Shadowhawk as a new companion. They were a quiet couple, both preferring to avoid people when possible. In 2008, Shadowhawk passed unexpectedly, and Kiki again found herself in need of a companion. A young male named Rajan was in immediate need of rescuing. He was brought to the sanctuary, paired with Kiki, and they soon bonded.

Kiki was fiercely protective of Rajan, and despite her general reluctance to interact with her caretakers, when Rajan would leave for educational programs, Kiki would race to the bottom of the enclosure and begin a routine of barking, growling and head tossing. While Rajan was gone, she would howl mournfully, and upon his return Kiki would risk getting close to her caretakers just to assure herself Rajan was safe.

During the High Park Fire in 2012, Kiki had to be left behind until the second wave of evacuations five days later. She survived unscathed in an enclosure that was one-third burned by the fire. In the summer of 2013, Kiki was helped to pass after a spinal condition took away her ability to walk unaided.