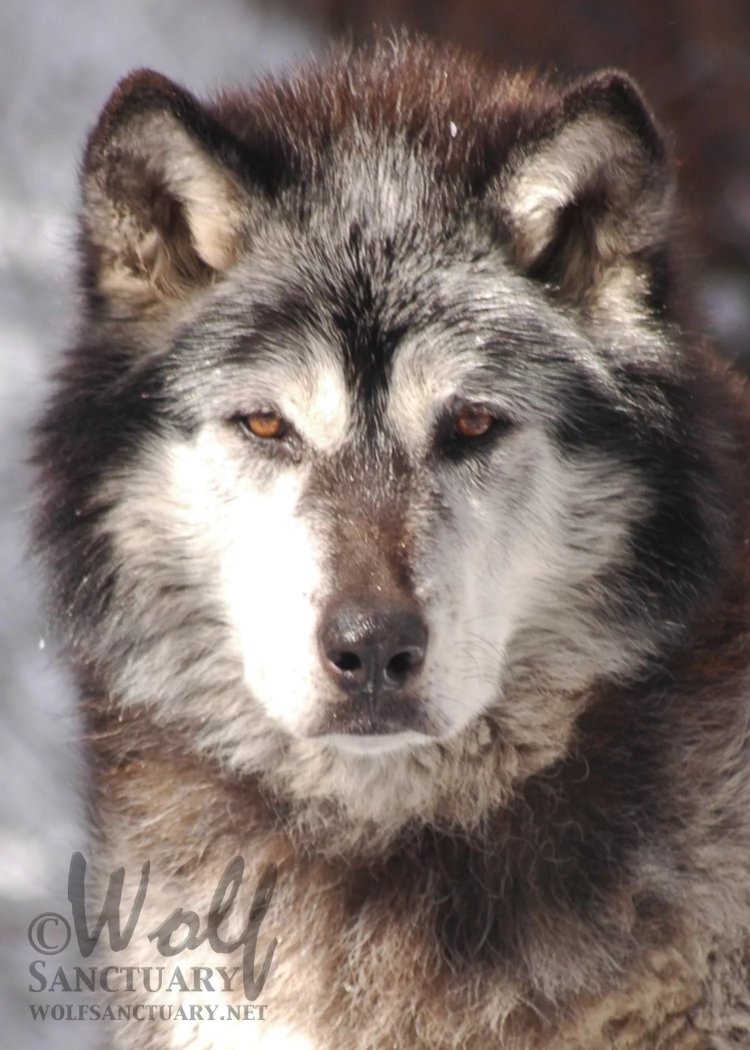 Kenai’s story began in Alaska where he was born at a wolf-breeding facility. Kenai’s mother was reported to be a pure McKenzie Valley wolf and his father was documented as 87% timber wolf. A young couple from Fort Collins, Colorado, on vacation in Alaska, toured the facility and became fascinated with the animals. They purchased Kenai, who was four months old at the time, without investigating what owning a wolf dog entailed. Unfortunately, Kenai was terrified of his new owners and his new home and would hide when approached. He was unable to bond with his new family, and Kenai’s owners became very frustrated. This was not the warm cuddly puppy they wanted, and after just six days Kenai was turned over to W.O.L.F.

At first, Kenai would stay as far away from humans as possible. Then a seven-month-old female named Samantha arrived at the facility, and they were placed in the same enclosure. Kenai and Sami bonded very quickly and Sami helped Kenai accept his new home. Slowly, over time, Kenai grew in confidence and assurance that he would not be uprooted again.

In February of 1999 a young male named Lakota was introduced into Kenai and Sami’s enclosure. Lakota was a very exuberant animal who kept Kenai and Sami on their toes. Kenai adjusted to his new family and became a favorite of all W.O.L.F. visitors. He had a very unique, unforgettable way of greeting people. It started with a mad scent rub all over your head and back followed by a not-so-gentle bite on the back of your head. Once all the visitors were thoroughly “Kenai’d”, he would sit next to you and demand scratching until your arm almost fell off. If you stopped, he would whack you with one of his giant paws to start again.

Unfortunately, Kenai developed hypothyroidism, which significantly decreases metabolism and causes coat issues. One day, staff noticed Kenai appeared to have blood in his urine. He was also lethargic and not acting like himself. Antibiotics were started, but he continued to get worse. He was taken to the vet clinic, where tests determined he had Evan’s Syndrome, a condition that causes the body to destroy its own red blood cells and platelets. Treatment had a low success rate and required hospitalization, blood transfusions and serious medications. We could not ask Kenai to go through that. He came home to his pack and territory, where he was helped to pass in the company of his pack mates..