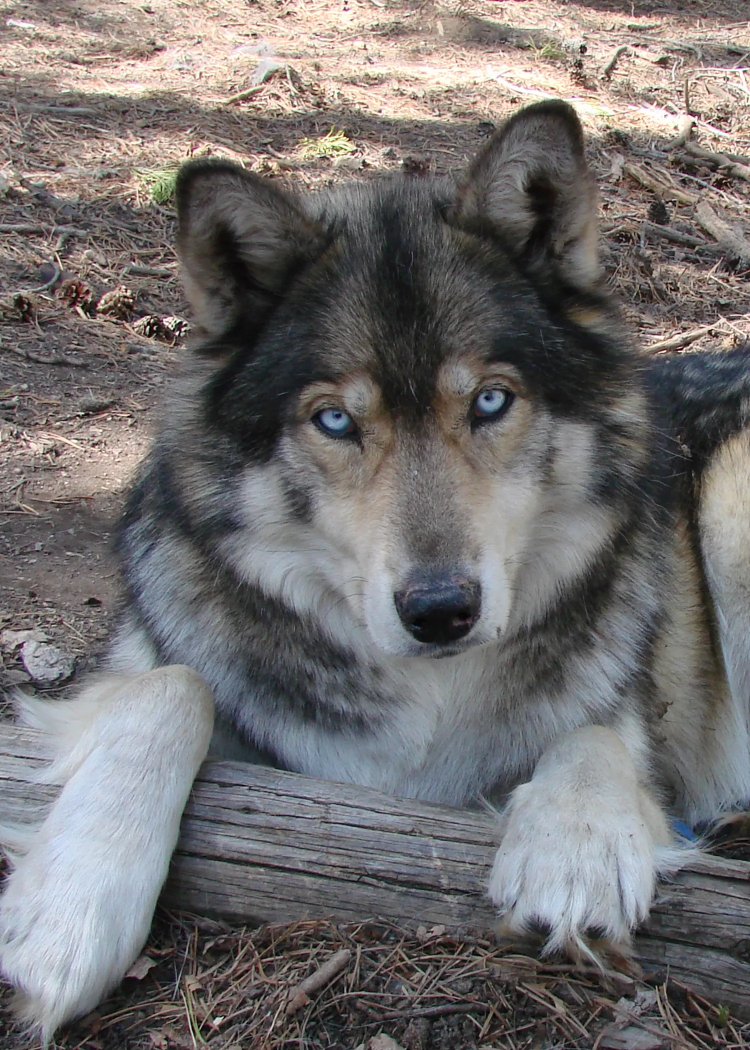 Male
Born: January 2002
Rescued From: Colorado
Given Sanctuary: March 5, 2002
Returned to Spirit: May 6, 2013
Kawa was rescued from a horrific local breeder in February, 2002 at about six weeks of age to be a companion for Archimedes and two older female pack members, Myah and Chica. His name translates roughly from Apache to English as “Great,” therefore making him the “Great One.” His father was a part Siberian Husky wolf dog from who Kawa inherited his strikingly beautiful blue eyes. Kawa’s early-age rescue was facilitated to ensure his safety and well being. Because of this, he had to be fed formula first with an eyedropper and then a baby bottle. He was next introduced to small pieces of raw elk, which he at first didn’t know what to do with. He caught on quickly and the formula feedings were ended!

In mid March, 2002, he was introduced first to Arcs and then to the females. Arcs was a 24/7 outdoor, nearly pure wolf who was expressing his dissatisfaction with being alone most of the time inside his half-acre chain link enclosure by decimating plastic water pails. Arcs welcomed the tiny squirming mass by partially laying on and scent rubbing little Kawa. March, 2002, was an unusually cold March, even by Black Hawk, CO standards at 9120 feet elevation. Kawa’s caretaker would go outside just before his bedtime, pick Kawa up and stuff him inside his parka for a few minutes each night to give him some warmth. The nighttime temps on several nights were approaching 20 below zero.

Because of his early interactions with humans, Kawa was very social. He would frequently follow human visitors around and intentionally flop down on the ground directly in their paths to extort a belly rub. Kawa also enjoyed playing exuberantly with his pack mates, racing around at top speed, jumping from condo roof to condo roof. He loved to consume copious amounts of the ever-abundant wintertime snowpack and would howl at passersby, a wolf neighborhood watchman. Kawa grew quickly, both in size and in boldness. He was frequently disciplined by the other pack members, sometimes a bit roughly, and a year-and-a-half of this cemented his position as the pack omega.

Sadly, the medical wheels came off of his cart in rapid-fire succession beginning in the fall of 2012. First, Kawa was diagnosed with laryngeal paralysis and had surgery to partially mitigate that condition in the spring of 2013. After that he could no longer sing his deep, throaty song. He then developed severe aspiration pneumonia, began refusing food, and had a four-day stay at a vet clinic. Kawa uncharacteristically continued to refuse food and was diagnosed with pancreatitis, for which there is no known treatment other than to rest the organ by not feeding the patient.

It had already been several days since Kawa had eaten anything. After several more days of hand-injecting him with antibiotics, anti-emetics and pain meds, he continued to refuse all food. His irises and exposed skin areas were yellowing from jaundice. After day eight of his struggle and continued snubbing of all food, we made the decision to help him move on. Kawa was just over eleven years old when he passed peacefully on May 6, 2013.