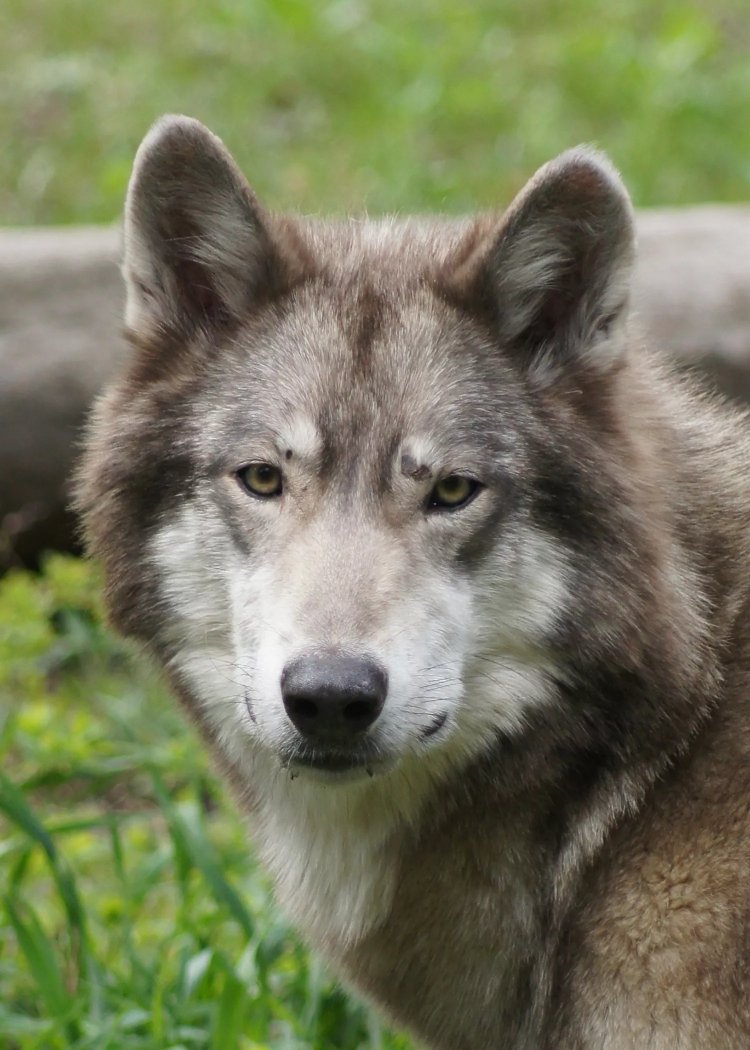 May 8, 2014, W.O.L.F. received a frantic phone call from the director of Colorado Wolf and Wildlife. There was a six-year-old female who needed immediate rescue. Since she had just had a litter of pups, and couldn’t be spayed until she finished lactating, they couldn’t take her. Did we have space for her or know anyone who did?

The director sounded so desperate for help that we agreed to rescue her. After forwarding us her correspondence with the woman surrendering Kaileah, we started reading her story. Kaileah had been purchased by the woman for $1,500 from another individual who had become ill and could no longer keep her. Soon after the purchase, however, her new owner was called away to care for her ailing grandfather and could not bring Kaileah. So she was temporarily placed at a breeding facility until she could be picked up at a time when the lady could take care of her.

Three months later, her owner received a call from the person in charge of the breeding facility. Kaileah had become so aggressive that they were scared to go in with her. She recently had pups but reportedly tried to eat one of them due to the stress she had been under. They had taken the pups away from her at three days old. They told the owner Kaileah needed to be taken home ASAP because of her behavior.

When she arrived to pick up Kaileah and the pups, what she found was disgusting. Kaileah was nothing but skin and bones. Both she and the pups were infested with intestinal parasites. She was in a small kennel with a concrete floor that was covered in feces. She had cuts and scrapes all over her legs from the steel dog door. Far from the aggressive animal described, her owner found Kaileah shy around strangers yet so desperate for attention that she couldn’t go anywhere without Kaileah trying to follow or becoming anxious when left behind. Kaileah needed constant companionship, but as her owner was leaving the country soon and with no one to care for her while she was gone, something needed to be done. By the time she contacted Colorado Wolf and Wildlife seeking placement she had only had Kaileah in her possession for two weeks.

Desperate to get her out of that situation we let her owner know we could take Kaileah now, and one of the male pups as well. We were told that the pups had all been placed but she would be happy to drive Kaileah to us later that week. Arrangements were made and early in the morning on May 16th Kaileah made it to Colorado.

When Kaileah first got out of the car and was put into her new enclosure, she was interested in exploring her new surroundings but very reluctant to leave her owner’s side. So they walked the whole enclosure together. Eventually Kaileah began to feel more comfortable and confident in her surroundings and started to explore on her own. When it came time for them to say goodbye, Kaileah tried to follow her owner out of the enclosure but after she left Kaileah quickly settled into her new home at W.O.L.F.

Originally, since we could not spay her immediately, we decided it would be best to have Kaileah stay by herself to allow her hormones to settle and gain some weight. Later that month, while Kaileah was out for a walk, we noticed Drake behaving strangely when she passed by. Instead of his normal territorial displays, Drake appeared extremely interested but shy, watching Kaileah for a few moments before ducking out of sight only to reappear and repeat the process. Curious, we decided to let them meet at the fence and the two immediately began play bowing to one another. Since we couldn’t put Kaileah in with Drake while he was in with Kasota, we wanted to make sure that what we were seeing was genuine interest between the two of them. After her spay, we decided it was time to introduce them.

Drake and Kaeileah were always together, and their bond grew very strong. Kaileah was definitely the alpha, but was willing to share attention and treats with Drake and her social interactions with staff encouraged Drake to show his more social side. On a sunny day in early May, 2015, the two were enjoying the spring weather, and both wolves accepted attention and massages from staff. The next morning it was a huge shock to staff to discover that Drake had died during the night when a tumor on his heart ruptured. Drake passed very quickly, but his passing left Kaileah, the staff, and volunteers in a deep state of grief.

We wanted to allow Kaileah the time to grieve but we knew she needed another companion. In July we rescued a wolf named Ahote. The pair did several “drive by” walks before even looking at each other. Though Ahote’s pairing with Kai got off to a slow start, but eventually they became best friends. Ahote doted on Kai, always staying close by her side.

Kai loved to be petted and would often come running up to her caretakers and sit on their feet or lean heavily against their legs so they couldn’t move. If they tried to get around her, she always seemed to be able to get in the way again and demand more scratches. In fact, Kai was sometimes so obsessive and enthusiastic with her caretakers that Ahote would often try to chase them away or redirect her attention back to him. Jealousy, maybe?

On November 23rd, 2018 while conducting morning rounds, caretakers discovered that, like Drake, Kai had passed away unexpectedly during the night. Everyone was shocked and distraught at how an animal who was so energetic and playful not 12 hours earlier could no longer be with us. Kai was submitted for a necropsy to determine the cause of her death, which was discovered to be mesenteric torsion, an unpredictable condition that develops suddenly and is nearly always fatal even with immediate medical attention.

Though her death was shocking, we take comfort in knowing that Kaileah’s passing was quick and that she was able to live life to the fullest until the very end. That joie de vivre was just one of the many qualities that made Kai such an amazing individual. Goofy and social with many of her caretakers, Kai was one of those delightful souls who make it very difficult not to play favorites among the many past and present residents of W.O.L.F. Her beauty was stunning both physically and spiritually. Her sudden departure has left a gaping hole in the hearts of all who knew and loved her.