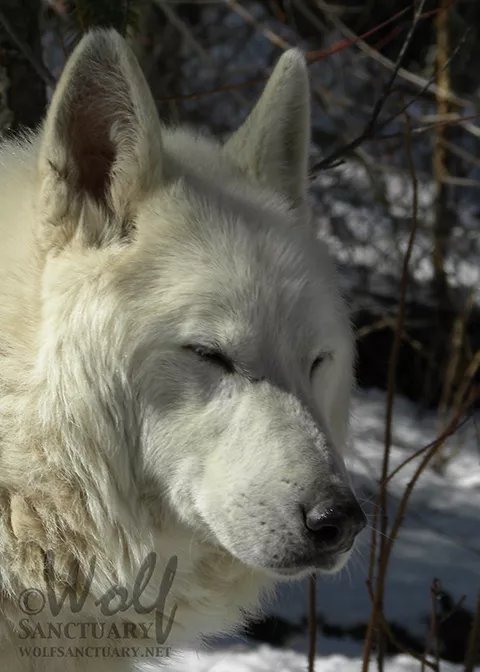 Male
Born: January 1993
Rescued From: Colorado
Given Sanctuary: October 1, 1995
Returned to Spirit: July 15, 2010
The small town of Walden, a ranching and farming community in northwestern Colorado, had a wolf roaming the community. Not a wild wolf. Everyone knew where it had come from. A woman had stayed in town for several months with her wolf dog. When the woman left town, she left her wolf dog behind. For a while, everyone provided handouts to the animal and wasn’t very concerned about their free-ranging neighbor. In order to prevent problems, however, it was decided to find a home for him. The sheriff’s wife contacted W.O.L.F., and arrangements were made to pick him up.

Kai adapted well to his new life at W.O.L.F. He was a very sweet animal and came to women easily. He was grouped with two suspected pure wolves, Akyra and Sebastian. They enjoyed racing around their enclosure and seemed to be a well-bonded group.

After many years, when both Akyra and Sebastian had passed away, Kai needed a new companion. A female named Pride was also in need of a companion, and the animals were introduced to each other. Although significantly younger than him, Pride absolutely adored Kai and her rambunctious energy helped to keep him young. Unfortunately, in early 2010 Kai’s age began to catch up with him and the decision was made to move Pride in with a younger companion.

Kai did alright on his own, although without the stimulation of a younger animal, he became more and more content to relax at the top of his enclosure, making it necessary for volunteers to hike his food up to him. He was very happy to receive their love, attention and scratches.

One morning when a volunteer approached Kai with his meds, she noticed a sizable skin tear on the side of his neck. Most likely the cut had resulted from Kai falling in his enclosure and catching his neck on a branch, but we didn’t know for sure. Though Kai behaved as if nothing were wrong, he was rushed to the emergency vet hospital where they stitched him up, took x-rays and drew blood for testing. Aside from the cut on his neck and some arthritis, the vets said he was in remarkable health and he was brought back to the sanctuary to recover.

Kai, however, soon took a turn for the worse. He became very lethargic and had difficulty keeping any food or water down. By the next morning he could barely lift his head. The vet hospital called to say that the results of his blood test showed he had an extremely low red blood cell count and the only thing we could do for him was an immediate blood transfusion. At 17 years of age this would only be a short-term solution, all of his physical systems were failing. Kai seemed at peace with his situation, and he was assisted in passing.