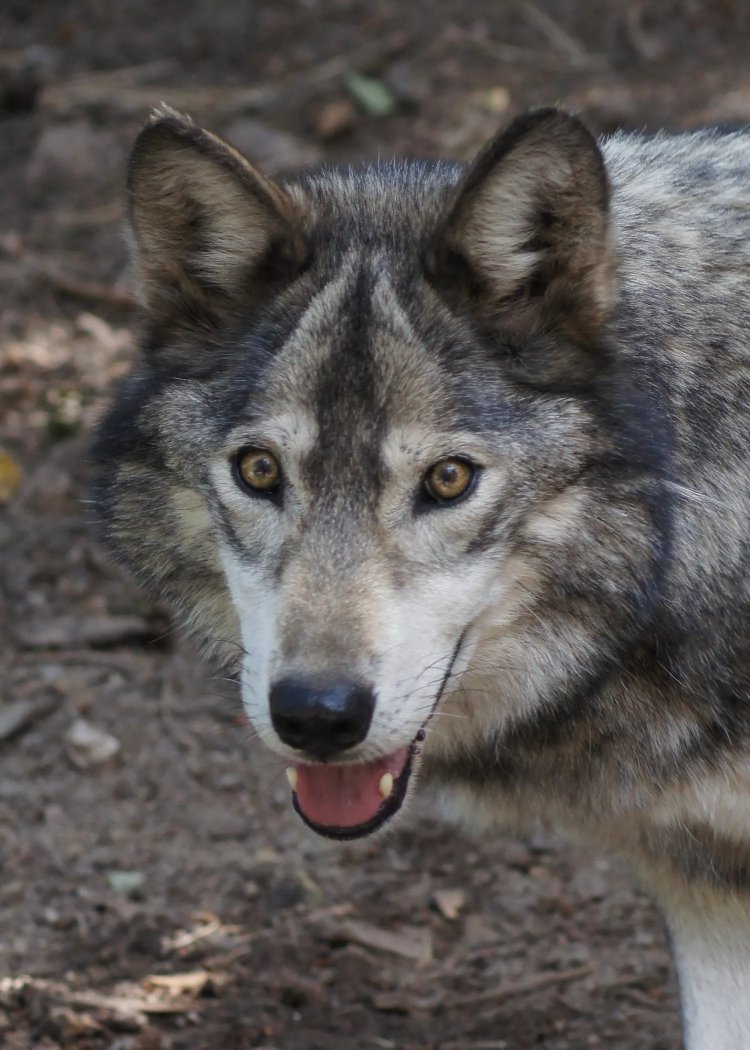 In May of 2006 the owner of a backyard breeding operation in rural Wisconsin died, leaving twenty-two wolf-dogs living on chains in horrendous conditions. The owner had been ill for several weeks until she was found, near death, by a friend. During the owner’s illness, water for the animals had run out, there was no food, and the animals’ condition had deteriorated drastically. The small Wisconsin town closest to the operation was ill-equipped to handle the rescue of so many animals, so the Animal Humane Society in a neighboring town in Minnesota stepped in to help the wolf-dogs.

W.O.L.F. received a call from the AHS asking if we could take the wolf-dogs, and after dehydration and starvation only eighteen animals were alive to begin the rescue, we call Wide Awake. We agreed to rescue the animals, including JJ, but when they arrived to get the animals ready to be transported, she was missing.

The AHS had a pretty good idea who may have taken JJ and a search and seize warrant was obtained. Fortunately, JJ was exactly where they thought she would be. Unfortunately, the conditions she was being kept in were horrible. A chain had been wrapped around her chest and neck before being secured to a tree. The weight of the chain and her constant pacing had caused the links to cut into her skin. On top of that she was also being deprived of food and water. Luckily they were able to get her out and send her on her way to Colorado.

JJ was small in stature but large in personality. She was often snappy and very wary of her caretakers. She was originally paired with Atlantis who also came from the Wide Awake Rescue. They never seemed to form a strong bond, and as Atlantis aged, he was no longer an appropriate companion for the much younger JJ.

In 2012, JJ was paired with Odin. Odin was rescued from the deplorable tourist attraction Wolf Country USA in Alaska. It was love at first sight between the two of them and within a few months JJ was a completely different animal. Before she had been scared and avoided her caretakers. After meeting Odin, she became confident and bold, often soliciting pets or food from her caretakers. Odin and JJ where inseparable and always playing with one another. It was amazing to see how much the bond formed between Odin and JJ healed them both.

On June 8, 2017, Odin returned to spirit. His passing was completely unexpected and left JJ and the staff and volunteers in a state of shock. JJ was lost without her companion and needed time to come to grips with the loss. She no longer wanted to come to the fence for treats and her grief was palpable. When another older wolf named Tonka, lost his companion, staff made the decision to put JJ into a new enclosure with Tonka. While Tonka did seem to help comfort JJ, there relationship was once again like that of roommates and JJ became more and more reclusive as time went on, avoiding her caretakers and spending most of her days sleeping in the sun. When Tonka passed in late summer of 2018, we knew we didn’t want JJ to be alone for long and rescued a young male named Takoda as her companion.

Takoda was wonderful for JJ and she started to engage with life again. She would chase after him, trying to play, and started interacting with her caretakers again. Her appetite, energy and attitude were steadily improving every day. Her spark was back! Her increased activity level was helping with her arthritis and everything looked good on her physical in November 2018, so it was shocking to find JJ shivering and uninterested in food on January 30, 2019.

She was immediately bundled up and rushed to the CSU Veterinary Teaching Hospital for emergency treatment. What they found devastated everyone. JJ had developed a hemangiosarcoma in her heart that had ruptured. The only thing they could do for her was to make her comfortable until she passed away. Because of this, the decision was made to help her pass. Caretakers returned to the Sanctuary to bring Takoda to the hospital so he could be with her when we all had to say goodbye.

JJ was almost 15 years old when she passed away and we miss her dearly. But we are honored to have been able to care for her for over 12 years and take joy in the fact that Takoda brought such happiness to JJ for the last five months of her life.