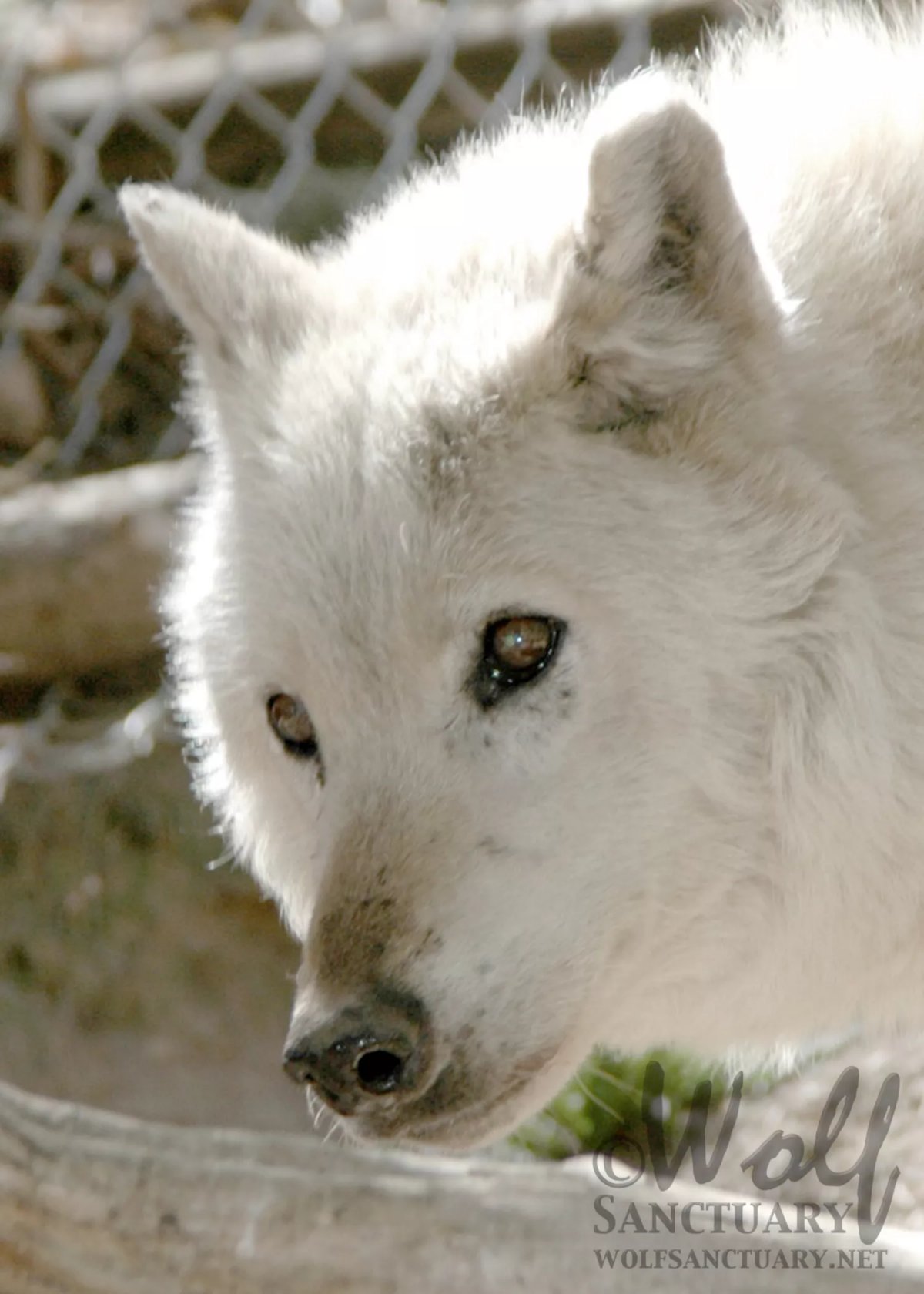 Female
Born: April 21, 1988
Rescued From: Colorado
Given Sanctuary: March 1, 1998
Returned to Spirit: December 28, 2006
Jasmine and her two sisters began life with a breeder in Black Hawk, Colorado. At first the animals were well cared for, but over time the owner began to neglect them, and one of the animals died, purportedly of starvation. Concerned neighbors became involved and began trekking food and water into Jasmine and her surviving sister, Ashley, from the closest access road they could reach. As the neighbors kept up their care of the animals, they attempted to alert authorities to their plight. When the owner of the property defaulted, the mortgage company performed a survey and discovered that the animals’ enclosure was on U.S. Forest Service property. The Forest Service seized the animals and Jasmine and Ashley came to live at W.O.L.F.

The two nine-year-old sisters shared an enclosure and adapted well to their new life. Ashley was the dominant animal, and volunteers frequently saw the sisters playing a game wherein Ashley pinned her sister to the ground, eliciting a series of yelps from Jasmine. Although very shy, Jasmine and her sister bonded with several of the W.O.L.F. volunteers and enjoyed getting attention.

The Ancient Ones, as we lovingly referred to Ashley and Jasmine, amazed us for years. Although they showed some signs of aging, with Jasmine losing her eyesight and slowing down and Ashley experiencing small strokes, neither one was giving up on life.

Then, coming up on nineteen years of age, Jasmine experienced some sort of episode. It was obvious that although very slow, she was still in control and getting to her water and house just fine. One morning when we were checking on her, we found Ashley in an awkward position and struggling to breath. She had apparently suffered another stroke, this one much more serious than the previous ones. She was made comfortable and passed very peacefully within five minutes.

Jasmine was alone for the first time in her long life, but seemed to be doing OK. Then a big snow came and it was necessary to move her to our geriatric run. Everyone at W.O.L.F. began spoiling her. We all knew that she would not stay with us much longer.

A few weeks later, we found Jasmine struggling to breath and unable to get up by herself. It was obvious that she was ready to leave. After saying our goodbyes, the vet helped her to pass. As Jasmine took her last breath, the rest of the wolves at the Sanctuary began a mournful howl.