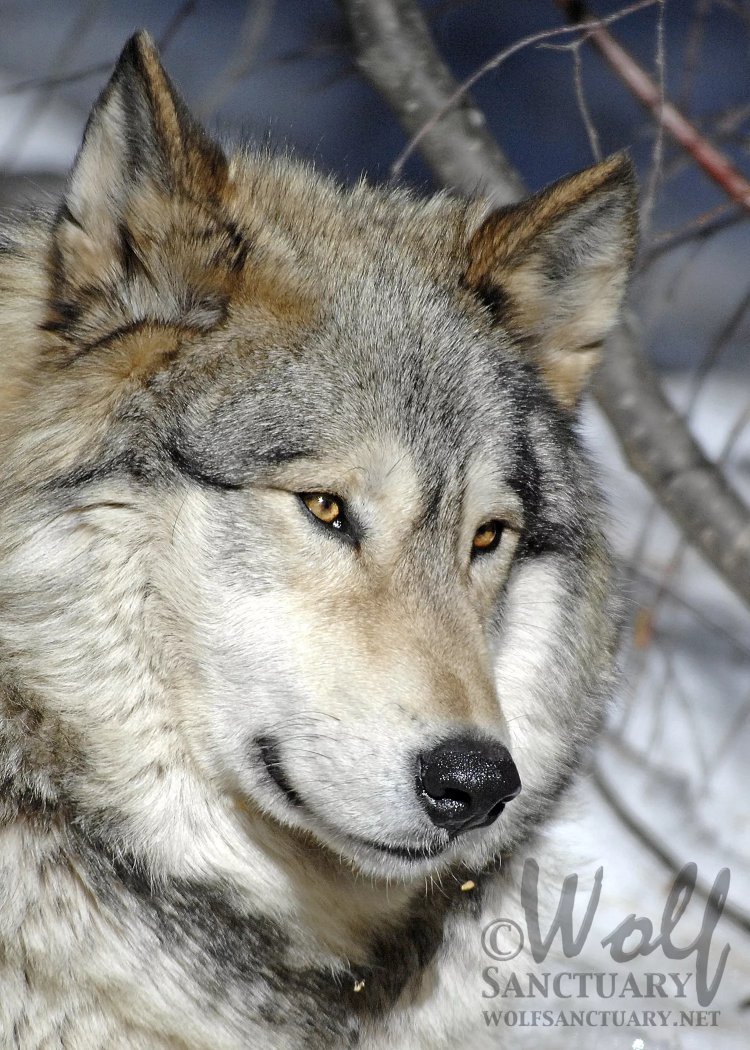 Male
Born: May 22, 2001
Rescued From: Indiana
Given Sanctuary: June 2, 2002
Returned to Spirit: August 20, 2008
Indigo was one of seven siblings born on State Forest land in Indiana. Their birth violated state law and officials threatened to confiscate and kill the entire litter. After the owner put out an emergency plea for help, the pups, approximately seven weeks old at the time, were taken in by a small rescue in Florida. By the time W.O.L.F. found out about the pups, a year had gone by and two of the animals had not yet been placed. One of the pups, Indigo, seemed like an ideal fit for Spirit and two volunteers made the long trip to Florida to bring him to his new home.

Indigo was placed in the isolation run for a few days to be sure he was healthy and to give him a chance to adjust to his new surroundings. Indigo was then placed with Spirit, who was grieving the loss of his companion, Cheyenne, and not eating. The best thing for a grief stricken animal is a puppy, as all wolves love puppies and will readily accept and raise them. The animals bonded very well, and Indigo mimicked Spirit’s every move. Spirit, as we knew he would, was teaching Indigo how to behave like a wolf.

In 2003, construction was completed on our one-acre enclosure intended for Kiki, Matoskah, Spirit, and Indigo. Everything went well on moving day, and for a short time the four animals seemed to enjoy their new space and company. Then Kiki, the female, decided Spirit would be her new mate, and she made no secret of the fact that Indigo was not welcome. To avoid any issues, Indigo was moved out of the enclosure, and placed with Sebastian, another male that was currently alone.

Sebastian and Indigo were the best of buddies for a couple years. They played hard all the time, and Indigo became more confident with humans after watching the very social Sebastian get love and attention from anyone who came into the enclosure. He still wouldn’t let humans touch him, but he eagerly ate offered goodies and was infamous for attempting to steal tools. In 2005, Sebastian became ill with mouth cancer and Indigo stayed with him to the end.

After trying without success to place Indigo with two other animals, he was brought to Sky and Nugget’s enclosure. Nugget, the alpha female, excitedly accepted the newcomer with tail wags and kisses. Indigo made it clear to Sky that he was to be the alpha male. Fortunately, Sky accepted Indigo as the boss, and the three began to bond as a group.

One summer day, a volunteer noticed that a five-gallon water bucket in Indigo’s enclosure that had been filled only a few hours earlier was almost empty. Staff immediately rushed to find which animal was ill, as that kind of water consumption can only mean serious illness. They found Indigo lethargic and obviously under the weather. Many tests and several trips to the vet later, we learned that Indigo was suffering from severe pancreatitis. We were able to control his condition with dietary modifications for a short while, but then Indigo went into a diabetic crisis that would have required intense hospitalization followed by daily insulin treatment for life. We could not ask an unsocial animal to withstand this, and the tough decision to euthanize him was made.