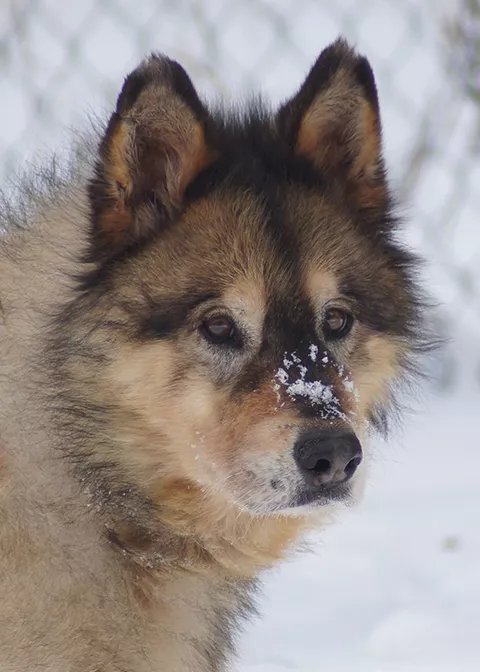 Male
Born: October 10, 2001
Rescued From: Colorado
Given Sanctuary: January 8, 2014
Returned to Spirit: June 7, 2015
Before coming to W.O.L.F. Hachi’s life was a difficult one. Given at a young age to a hoarder in Adams County Colorado, Hachi lived most of his life as one of 80 animals neglected on a condemned property without proper shelter or care. Though he didn’t lack for canine companionship, the hoarder did not socialize with the animals in her care leaving them skittish, fearful and in poor health.

In October of 2013 animal control officers were forced to confiscate the animals from this repeat hoarder for a third time. Many were in such bad shape that it was kinder to euthanize them rather than make them suffer longer. It took months before the hoarder agreed to sign over ownership of most of the animals to the Adams County Shelter. The ones that could be adopted were and the ones that couldn’t were surrendered to other rescue organizations. This was how Hachi came to our attention.

The call from the shelter was desperate. Hachi had already been with them for over three months and not only had he been labeled a wolf dog (making him unadoptable) the shelter staff were afraid of him. If we couldn’t take him or know of a wolf rescue that could their only option for Hachi was euthanasia.

When we went to the shelter to do an evaluation on Hachi, it was not our intention to bring him home with us. We only had one opening at the Sanctuary and that meant Hachi would have to remain alone for who knew how long. Yet there was no way we could say no to his fearful, snarling teddy bear face when we saw him. He had obviously been through hell and deserved a chance to live a better life.

As soon as Hachi arrived at the Sanctuary, his fear aggression began to subside. He still curled his lip or barked at his caretakers if they came too close but he stopped charging the fence whenever a human approached. Soon this behavior turned from a fear response into a game and Hachi would often follow his caretakers around the enclosure barking loudly while wagging his tail. Because Hachi was so skinny with almost no fur when he was rescued in January 2014, he was given a specially prepared diet three times a day. Though only intended to last for a month or two, Hachi’s adorable face succeeded in talking his caretakers into continuing this special treatment until the day he passed.

About the time we began thinking of getting Hachi a companion we noticed a growth on his leg. Taking him to the vet we learned the heart breaking news. Our little wolf dog had a bone tumor in his wrist. The only treatment would be amputation. We couldn’t ask a 13 year old animal to go through the pain of surgery and recovery when he was uncomfortable being around humans so Hachi was put on a regiment of pain killers and watched carefully. Because of the location a fracture or break was extremely likely and we felt that having a companion animal would increase the risk of injury so he remained alone. Luckily Hachi seemed to enjoy being a bachelor and had a huge crush on his next door neighbor, Isabeau, content to watch “Izzy TV” between naps.

In May of 2015 the tumor once again began to grow rapidly and Hachi was having more difficulty moving around. His attitude remained unchanged however, and he continued on as if everything was fine. This more than anything is what broke our hearts when he finally fractured his wrist where the tumor was located. With no way to treat the fracture the decision was made to help Hachi pass. On June 7, 2015 Home to Heaven came to the Sanctuary to help Hachi pass peacefully. Determined to the very end, Hachi’s fighting spirit is still an inspiration to us all and he is greatly missed.