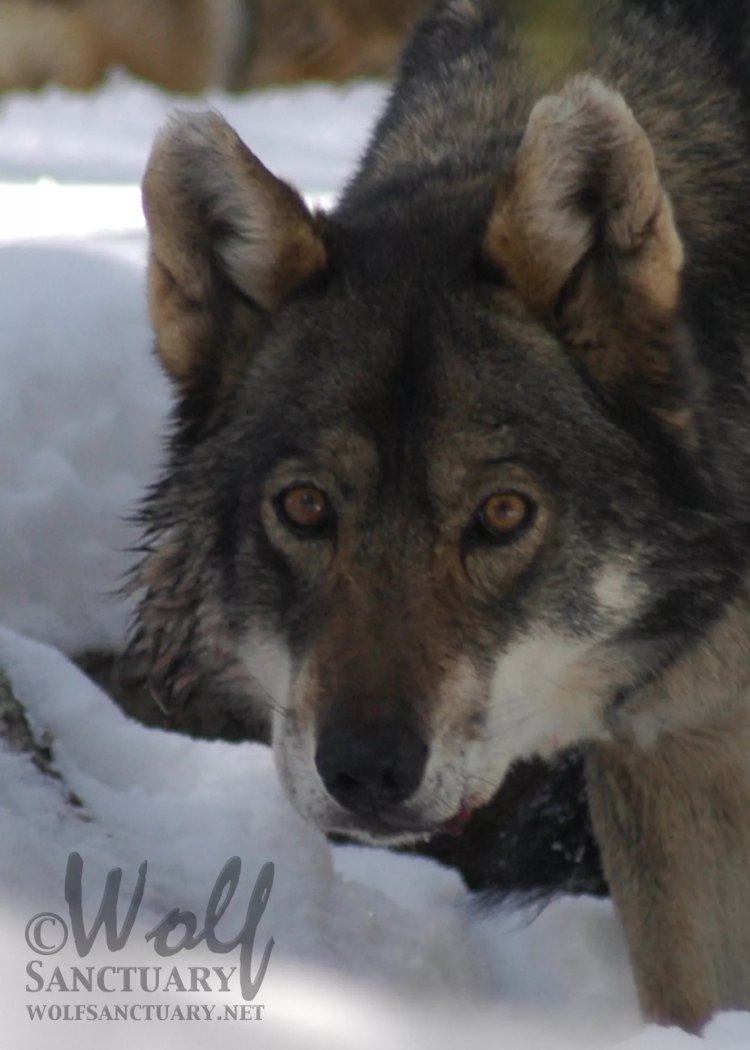 Female
Born: July 24, 1997
Rescued From: Wisconsin
Given Sanctuary: June 1, 2006
Returned to Spirit: September 30, 2009
Gina was one of eighteen wolf dogs rescued in 2006 from a horrendous backyard breeding operation in Wisconsin. The owner of the operation had died unexpectedly leaving the animals living on chains with no food or water. W.O.L.F. received a call from the Humane Society asking if we could take the animals, and the Wide Awake Rescue began.

Gina was paired at the Sanctuary with Hammer, another Wide Awake Rescue animal. The pairing helped both animals overcome their previous trauma, and they slowly became more healthy and comfortable in their new home. Over time, Gina’s strong alpha personality began to manifest itself, and she started fence fighting with her neighbors, Luna and Isabeau. She became the bravest of all the Wide Awake animals, barely stressed by human presence. We were ecstatic to see how well adjusted she had become since the rescue.

One day, we found Gina in distress. She was in the lower section of her habitat, unable to use her hind legs. Everyone sprang into action. Even with only the use of her front legs, Gina was avoiding humans with a quickness no one expected. She was soon caught up, placed into one of our wolf-proof travel kennels, loaded into the truck, and on her way to the emergency veterinary hospital.

The diagnosis at the hospital was not good. Either she had a clot blocking her spinal nerves, a slipped spinal disk pinching her spinal column, or a rapidly growing tumor pressing against her spine. The first of the three possibilities was the only one with a potential treatment option, given the realities of spinal surgery and recovery restrictions for a mostly wild and unsocial animal. Gina was given an injection of an anti-inflammatory steroid and a course of medication to follow.

We brought Gina back home, setting her up with accommodations in the main cabin at the Sanctuary. Through the night Gina, in the cabin, and her companion, Hammer, in their habitat, howled back and forth, each of them happy the other was all right but saddened to not be together. As the days passed, we painfully watched Gina’s paralysis worsen and knew it was time to help her pass. After her passing, we placed her in her enclosure with her companion, Hammer, hoping to provide him with some closure and understanding of his loss of a friend.