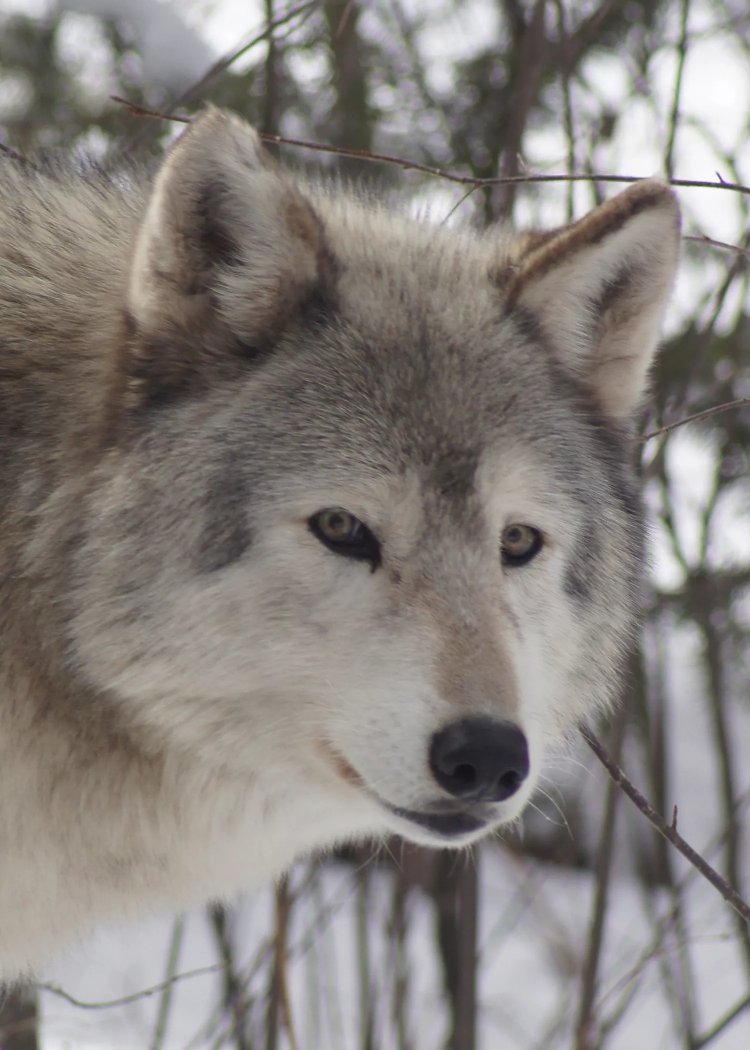 Frackette’s story before coming to W.O.L.F. is one of our more heartbreaking tales. Originally at a breeding facility in Arizona that was being shut down in 2002, Frackette and 13 other wolves were at risk of being killed when W.O.L.F. found out about their plight. We couldn’t take any at the Sanctuary but we also couldn’t let the animals die, so we began trying to find places for them to go. Eventually a facility in Texas stepped forward, saying they could take all 14 if they could get the money for the rescue.

W.O.L.F. helped raise funds to get Frackette and her companions transported to Texas, relieved that someone had the space to be able to help. Unfortunately, this “sanctuary” turned out the be no such thing. Later that same year we received another plea for money from the Texas facility when the animals started dying. Distemper, a preventable disease, had broken out among the wolves and wolf dogs. The sanctuary operators had failed to show for three eviction hearings and were eventually evicted from the property. Obviously the funds that had been donated to this facility were not going to the care of the animals and, again, emergency life-saving measures were required.

W.O.L.F. gathered a group of volunteers and quickly traveled to save the surviving animals. Of the 75 wolves and wolf dogs ‘rescued’ by this ‘sanctuary’ (including the 14 from Arizona), only 43 were accounted for. The census of these remaining animals was 18 had died of distemper, 20 were still alive and 5 had been re-homed. Sadly only two of the 14 animals we helped place there from Arizona were still alive, Frackette and her brother Beowulf. The surviving animals were treated and eventually re-homed to appropriate locations, and Frackette and Beowulf made their way to Colorado.

Unfortunately, W.O.L.F. still did not have space for these two, but we felt responsible for their plight and couldn’t justify sending them to another facility, so we arranged for them to go into a foster situation until space opened up at the Sanctuary. In 2011, Frackette and Beowulf were finally able to come to W.O.L.F.

Frackette never really wanted much to do with her human caretakers while she was with Beowulf. After Beowulf died in 2011, Frackette was paired with a much younger and social male named Loki, and we began to see more of Frackette. She would race after her companion and watch him interact with their caretakers. Eventually she started coming to the fence to take treats off the spoon and became our champion spoon thief. In fact, it was because of her success that we had to modify the handles of the spoons so that we could keep a grip on them! When she would get frustrated at the lack of food or speed with which it was being offered, she would often paw at the ground to get some attention. Frackette even had a special bark that she would use for one of her caretakers whenever he walked by.

On May 4 we noticed Frackette having some difficulty with her balance and she appeared to be in pain. She had been having some issues with brain lesions over the previous months as a result of surviving the distemper, but this was different. A vet visit revealed that something was very wrong, and the problem was unlikely related to the other concerns we had been treating. A large hemangiosarcoma was discovered in her lower abdomen. With the size and type of cancer we knew that, even with surgery, her chances of living more than a month were extremely low, if she even survived the procedure. The decision was made to help her pass. We are grateful she was able to remain active until the end and that her passing was quick. Frackette had just turned 15 years old.