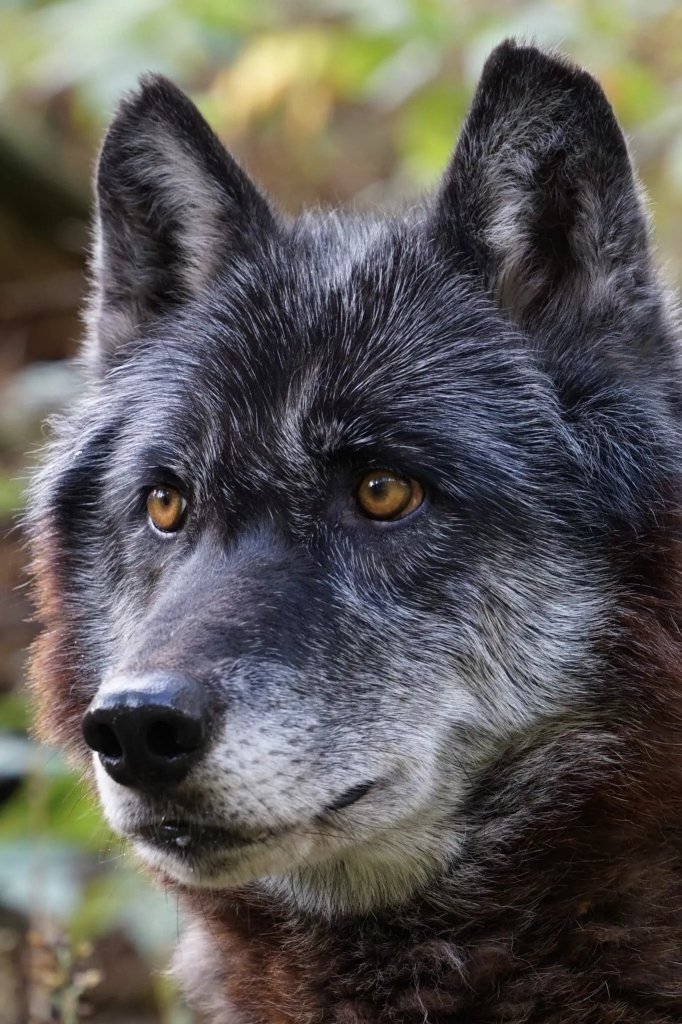 Ember (formerly known as Texas Red) came to W.O.L.F. after life at a notorious fur farm in Minnesota known as Fur-Ever Wild. She went through a long and perilous journey to safety thanks to the work of Lockwood Animal Rescue Center (LARC) founders Matthew Simmons and Lorin Lindner, who never gave up on the wolves who were doomed to be pelted for profit at the killing facility in Eureka Township, Minnesota. W.O.L.F. has given Texas Red the new name Ember to begin her new life in Colorado.

Fur-Ever Wild, owned and operated by Terri Petter, posed as a “petting zoo” where the public could come and pet wolf pups and other baby animals. For a fee, anywhere from $8 to $20 per person, the general public could serve as “volunteers” for “Pet-n-Play” sessions with wolf pups. However, as soon as the pups reached maturity, they were pelted by Petter and her crew, and the wolf furs were sold. Gruesomely, some of the pelts were for sale at the facility gift shop! A former Fur-Ever Wild volunteer Tim Warner speculated that Petter ran the “petting zoo” not only as a money-maker, but also to socialize the wolf pups so they would be easier to handle during the live pelting process.  “…What she’s doing is adjusting these wolf pups to be handled by people so they’re not skittish of people. And we know what happens. It’s easier for her to kill them [for their pelts] in a year or two and they won’t be scared of her. People need to know she kills the animals.”

In 2017, LARC and the Animal Legal Defense Fund joined forces to file a federal lawsuit against Fur-Ever Wild and Petter for violations of the Endangered Species Act. The Eureka Township Board in Minnesota also challenged Petter on zoning violations for her use of the “petting zoo” animals in her pelting operation. In 2017, by federal court order, LARC was permitted on the property, with law enforcement officers and attorneys involved in the case, to conduct an inventory of the animals at Fur-Ever Wild. The results showed the following animals:

In late 2017, with a looming court order that allowed for seizure of the animals, Petter, under cover of darkness, spirited away every exotic animal on the property. When the Sheriff finally permitted LARC to enter the property, many hours after the original court-appointed time, all the wolves, big cats, foxes, coyotes, and smaller animals were gone.

After much legal wrangling and some very intensive investigative work, in April 2018, LARC was able to locate twenty-six of the wolves who had been secretly transported to a private petting zoo facility in Oklahoma, operated by a shady individual named Joe Maldonado, also known as “Joe Exotic.” Maldonado is an individual who has been involved in numerous complaints of animal abuse and neglect in the past. In October 2018, he was indicted by an Oklahoma federal grand jury on “murder for hire” charges when he allegedly tried to put a “hit” on an exotic animal activist in Florida. Maldonado was also indicted by a grand jury on nineteen counts of wildlife and Endangered Species Act violations, including shooting and killing five tigers in 2017 to make room for other big cats at his facility and selling and offering to sell tiger cubs. He was further accused of falsifying records involving the sale of tigers, lions, and a baby lemur. He remains in federal custody awaiting trial.

Prior to his indictments, Maldonado agreed to surrender to LARC the twenty-six wolves that came from Fur-Ever Wild. LARC worked quickly to have the traumatized wolves checked by a veterinarian for health concerns and prepare them for transport. On Mother’s Day in 2018, LARC began the transport to bring the wolves to safety at their sanctuary in California. Ember/Texas Red was one of those animals.

There are not many details about Ember’s life at Fur-Ever Wild other than it must have been stressful and horrific. She likely spent her puppyhood as part of the “Pet-n-Play” exhibit before being transferred over into the “farm” population. Whether her fate was to be bred, pelted, or both is unknown.

After her cross-country journey from Oklahoma, Ember arrived at LARC in California in May 2018. LARC gave her medical care and provided her with the time she needed to recover from her ordeal. The beautiful black phase wolf was eventually placed with an older male at LARC. Ember longed for the companionship of another animal, but unfortunately, it was not to be. The older male rejected Ember, and she was once again living alone in her enclosure. LARC did not have another appropriate male who could be moved to live with Ember. When W.O.L.F. suddenly lost an older female wolf named Kaileah, her companion Ahote was left alone. W.O.L.F. gave him the time he needed to grieve for his lost companion, and when he was ready, W.O.L.F. began the search for a companion. During the search, W.O.L.F. contacted LARC to see if they knew of an appropriate female who needed a male companion. Ember immediately came to mind.

W.O.L.F. felt that Ember could work well with Ahote, and arrangements were made to fly out to LARC and pick her up. On January 3, 2019, the transport team left for California. They made it to LARC on January 4th. It was wonderful to meet with the staff at LARC, see their facility, and meet Ember. By mid-afternoon, it was time to load Ember into the van and start the seventeen-hour drive back to Fort Collins, Colorado. Though the staff at LARC were sad to see her go, they were excited for Ember to get a chance at companionship with Ahote at W.O.L.F.

Ember arrived at W.O.L.F. mid-afternoon and was placed into the lower area of Ahote’s habitat. Still a little groggy from the long drive and vet visit, it was decided to give Ember the night by herself to recover. In the morning, Ember was up and anxiously pacing along the front fence line. Hoping that having a companion would help to calm her down, it was decided to open up the gate between her and Ahote to let them meet. Ahote was immediately interested in Ember and obviously wanted to say hi. Ember, however, was not quite as comfortable with the situation and would fearfully tuck her tail and snap at Ahote if he came too close. Being the respectful gentleman he was, Ahote would always back off and give her the space she needed to settle down.

It took Ember three days to adjust to her new life at W.O.L.F. She stopped pacing the front fence line and began to explore her habitat. Though she still preferred to keep her distance from Ahote, she no longer reacted fearfully when he would get close. She also learned very quickly where the food came from, and every time one of her caretakers would walk by her habitat, she would run to the fence line and wait for a treat. Over time, Ember and Ahote’s relationship moved from one of roommates to one of friends. The two were seen playing together, especially when spurred on by their neighbors, and they enjoyed sleeping close to one another. The blossoming relationship between these two made it ever more devastating when Ahote was diagnosed with inoperable pancreatic cancer in September of 2019. While staff did not expect Ahote would survive through the end of the year, he far exceeded everyone’s expectations and kept up a healthy appetite and attitude until May of 2020. During these months, Ember became not only his friend but his protector. Staff was amazed to find that on a particularly cold night, Ember had joined Ahote in his doghouse, keeping him warm. During Ahote’s good months, they ran their fence line together and seemed to have formed a beautiful bond.

After Ahote’s passing on May 16, 2020, staff observed Ember carefully, watching her for signs of stress and loneliness. However, Ember seemed to be doing fine with the interactions she got with her neighbors through the fence, which gave staff some time to decide who to place with her as a companion. The decision was made to try her with Pax, our longtime bachelor who has proved not to be compatible with most of the companions he has been with. While the initial introduction seemed a bit tense, the two seemed to relax enough that staff decided to see how it would go. Later that day, however, the two got into a fight, and Pax was removed from Ember’s enclosure.

A few weeks later, after Sasha’s worsening mobility warranted separating her and Jacob, staff decided to try Jacob with Ember. There were a few moments of tension as Ember made it clear to Jacob that she wanted some space, but the two slowly became more comfortable together. Over time, it became clear that their bond was strengthening. They began playing together and spending lots of time in each other’s company. We are so glad that they have grown closer and are now wonderful companions.