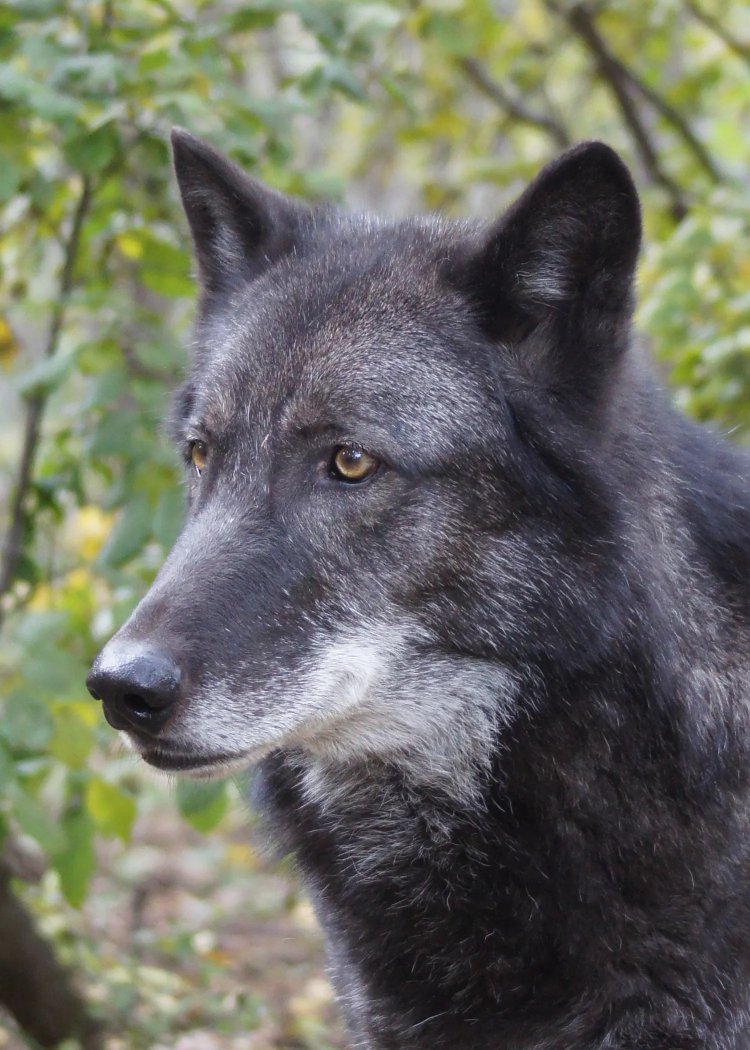 Drake came to our attention in Spring of 2013. His owner was looking for placement for Drake as he was being forced to move and couldn’t take Drake with him. Drake was all alone since his two companions had recently been hit and killed by cars after someone cut a hole in their enclosure fence. Since we had the space we agreed to accept Drake.

His owner drove Drake to the Sanctuary and walked him into the enclosure on a leash. Drake was tolerant of attention from his new humans but was very unhappy to be left behind. Eventually, with the help of his companion Kasota, Drake settled into his new life. He seemed to enjoy the amount of space he had and gradually stopped seeking attention from his caretakers, instead content to stay just out of reach as he followed them around the enclosure.

It was a few months after his rescue that we received an unsettling phone call. Drake’s owner was looking for him and heard he had been given to W.O.L.F. What?! He had been surrendered to the Sanctuary by his owner…hadn’t he? Concerned about the truth of Drake’s situation, we agreed for the gentleman to come and visit Drake. It was during his visit that his full story came to light.

This gentleman and the man who had surrendered Drake to W.O.L.F. had been partners and were in the middle of a nasty break up when Drake had gone ‘missing’. The gentleman had been told by his ex-partner that Drake had been killed along with the two other wolves Drake had lived with. Desperate to find out the truth, he had begun researching the situation and found the Sanctuary. Luckily for us, he was not looking to reclaim ownership of Drake. He simply wanted to reassure himself that Drake was indeed alive and well taken care of.

Drake, the gentle giant he was, quickly became a favorite at the Sanctuary. He would follow his much smaller companion around the enclosure and cuddle up with her at night. Eventually his size became an unintentional issue with Kasota, and though he wouldn’t mean to he would often knock the ancient wolf over with a turn of his head or a wag of his tail. It was decided to separate the two of them and place Drake with a younger female we had recently rescued named Kaileah.

The two hit it off instantly and became practically inseparable. Despite his much larger size Kaileah was clearly the one in charge and it became a challenge trying to get Drake enough food to eat as she would constantly chase him away during meat feeding. Kaileah’s social nature also encouraged Drake once again to seek attention from his caretakers and would often try to engage them in play or allow a quick scratch under the chin.

Drake’s death came as a shock to all of us. Though he had had a few ‘off’ days in the months leading up to his death, there was nothing obviously wrong with him. He had recently been taken to the vet to get some dental work done and showed no other signs of illness. 99% of the time he was active and engaged with life. The day before he died was a great day for Drake. He had tons of energy, dancing around his caretakers trying to play with both them and Kaileah, allowing a full body message and he had a hearty appetite. So it came as a shock to find him passed away the next morning.

The necropsy showed Drake had passed away because a tumor on his heart ruptured. It appears to have been a quick death. Though the shock and pain of his loss still haunts us, this is what we wish for every wolf in our care. One where the animal is happy and active one moment and gone the next with no suffering or prolonged illness.

We have always tried to save the limited space at the sanctuary for high-content animals that cannot be placed anywhere else. Isabeau fit this description exactly. When Isabeau arrived, blood tests revealed that Isabeau was under-nourished, dehydrated, and had signs of kidney disease. She was immediately treated for dehydration and the kidney problems and put on a healthy diet. Maybe that was why cheese and butter became the simplest way to coax her into her enclosure.