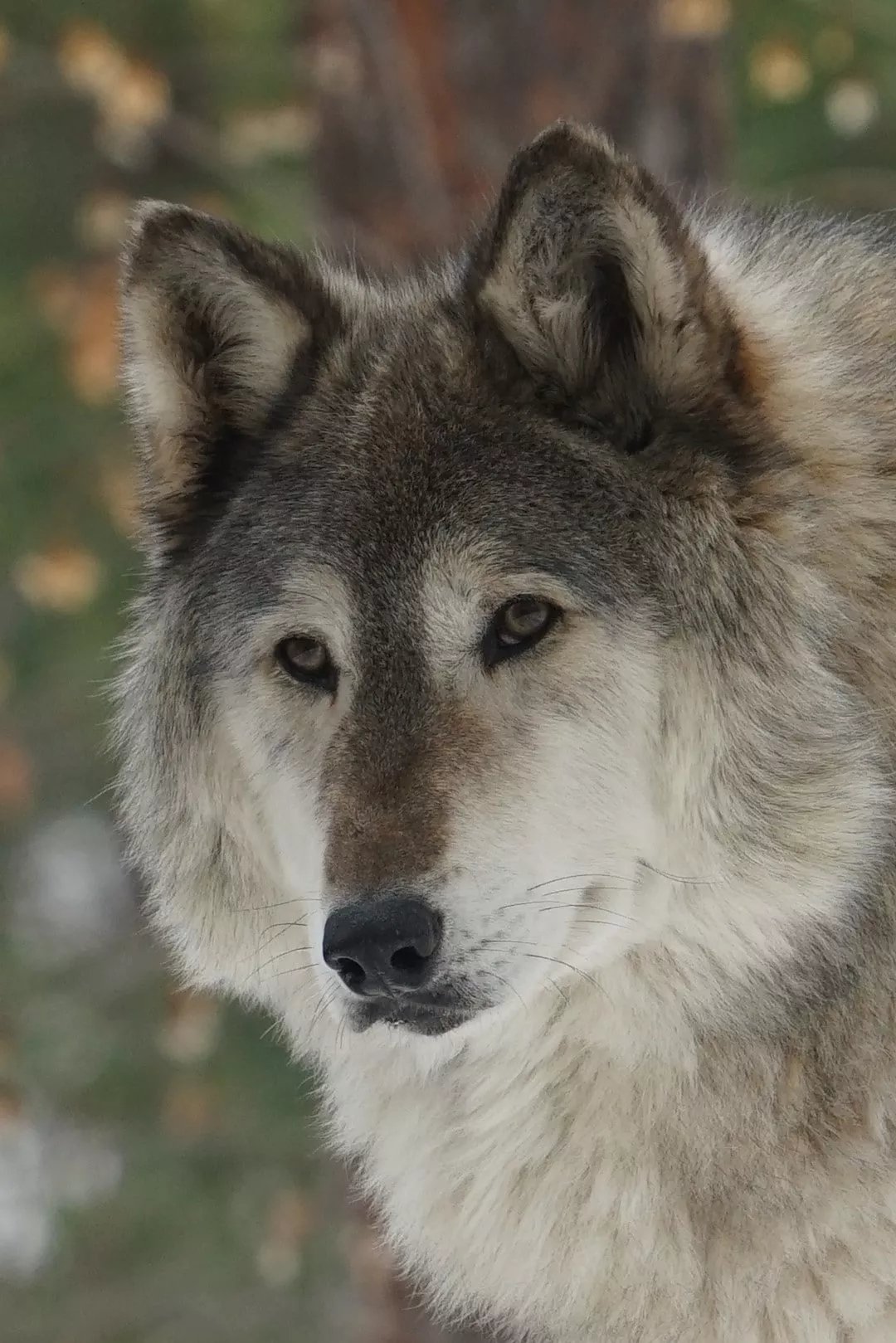 In January 2015, Denali made his way to W.O.L.F. after a long journey to freedom. His life began in 2004 in a barren landscape near Palmer, Alaska. He was taken from his mother to serve as a photo opportunity for tourists at a roadside attraction called Wolf Country USA. Denali was forced to live in chains while tourists paid money to take his picture.

Wolf Country USA was under investigation for illegally owning and breeding wolves and wolf dogs, and using them as a tourist attraction. The owner kept over 30 wolves and wolf dogs on 8 to 10 foot chains for their entire lives while on display for passing tourists. During the summer months the females were bred and forced to give birth in muddy pits while chained to posts in the wolf yard. The pups were sold to visitors as souvenirs.

The conditions at Wolf Country USA were horrific for the animals. They had no shade or enrichment. Many were sick and malnourished and did not receive any medical care. They were “taught” tricks by being hit with sticks and were often denied food if they did not perform for the tour groups. The owner claimed to be a wolf expert but he used the animals for profit with little regard for their health or well-being. Finally in late 2011, Alaskan authorities closed the facility.

In November 2011, staff from the Lockwood Animal Rescue Center (LARC) in California flew to Alaska to meet with the Special Prosecutor and other rescue organizations to find a way to keep the animals safe and avoid euthanasia. The Alaskan authorities agreed that LARC could take the animals to safety in California. In December 2011, 28 animals were caught up, vetted and prepared for an airlift. On the morning of December 12, 2011, the animals were released at the LARC facility. They were finally free from the chains that had bound them for so many years. Videos of the amazing rescue can be seen at: http://lockwoodarc.org/alaska-rescue-updates/

LARC became the central holding facility for these animals until they could be placed in other sanctuaries around the country. W.O.L.F. previously adopted three of these animals: Loki, Thor, and Odin.

When, in late December 2014, Cree lost her companion, Matoskah, to old age, we started looking for a new companion for her. We were worried, given her extremely independent nature and history of climbing fences, that if we left Cree alone for too long she would take matters of companionship into her own paws. We were equally concerned about not giving her enough time to properly grieve. As a result, we decided to send out a notice to our wolf rescue partners around the country asking for a high content, older male who needed placement within the next month or so.

LARC quickly responded to our request with pictures of Denali, and we immediately fell in love with him. Not only was he beautiful, but his personality seemed to be exactly what we needed for Cree: not frightened of people, but not highly social either. Denali was a perfect fit.

We contacted LARC on January 21st, and by January 23rd, we met Lockwood at 3 a.m. in the middle of Utah. We loaded Denali in our SUV, and headed for home. Denali was perfect during the 9-hour ride and stayed quietly curled up in his kennel. When we got to Colorado, we couldn’t resist getting him four cheeseburgers as a reward. At first he was a little unsure of the offering but soon became as demanding for the next bite as every other wolf dog we have ever met.

We arrived at W.O.L.F. at noon and released Denali into Cree’s catch area so he could stretch his legs and meet her through the fence. After such a long ride, Denali was anxious to get away from us, and Cree felt the need to defend her territory from the humans, so we decided to back off for a bit to let them calm down before we opened the gate that separated them. After a half hour, we went back and put them in together. At first Denali was more interested in the huge amount of space he had in his new enclosure. Cree seemed uncertain about him, preferring that he respect her 10-foot personal space bubble. But as each day passed, they became more comfortable with each other.

During their years together, we often saw them together at the top of their mountainside enclosure. They frequently followed the humans who came to visit in their enclosure, and they both loved to race down the mountainside when dinner was served. Denali and Cree formed a strong bond, and we were honored to watch them enjoy their senior years in the quiet companionship of each other.

On February 4th, 2020, caretakers became worried when Denali didn’t come down for morning treats as he did every morning. On closer inspection, staff noticed that Denali’s face was not symmetrical, and his right eye was drooping. He also seemed to be having trouble walking, as he fell multiple times and seemed to need something supporting his left side in order to remain upright. Now with a heightened level of concern, staff caught Denali and rushed him to the CSU Veterinary Teaching Hospital to gain insight about what had caused this acute onset of physical and neurological problems. That afternoon, veterinarians determined that Denali had a severe ear infection and a tumor in his right ear. They decided to hospitalize Denali overnight before performing further diagnostics the next morning.

Though preliminary bloodwork and chest radiographs showed no concerns, an MRI provided a devastating revelation. It showed that Denali had numerous lesions in his brain. Two of these were of significant size, and there were three others noted as well that were smaller. Veterinarians proposed that these were most likely cancerous, though they indicated that they may have also been the result of a stroke. Even if the lesions were from a stroke and not from cancer, the chance of a complete and comfortable recovery for Denali were extremely low. With the knowledge that we could not provide Denali with a good quality of life, staff made the devastating decision to elect for euthanasia. With staff that loved him by his side, we helped Denali cross the Rainbow Bridge shortly after noon on February 5th.

While Denali’s passing was incredibly sudden and left us all in a state of shock and grief, we were so thankful to have been able to provide a home for him for five beautiful years. He passed just three months shy of his sixteenth birthday, and we wish we could have had more time with our big, fluffy boy. We will miss him forever, and we join Cree in grieving the loss of this wonderful wolf.