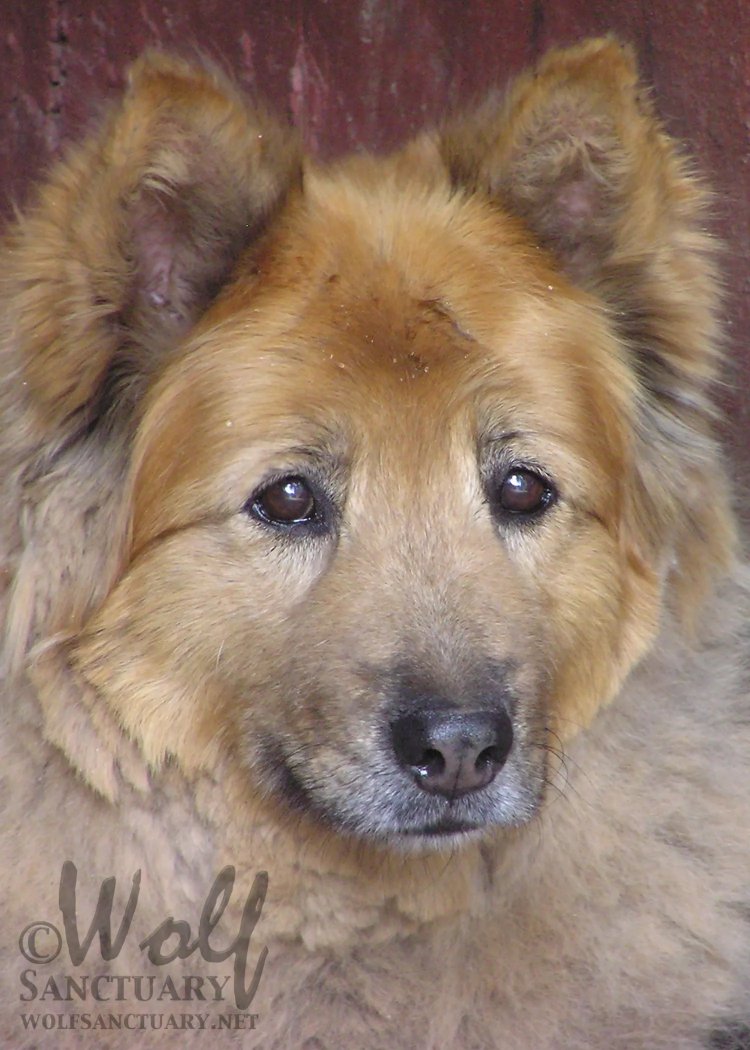 Female
Born: February 16, 1995
Rescued From: Colorado
Given Sanctuary: March 1, 1995
Returned to Spirit: January 30, 2008
Chocolate Face received her name when she was only two weeks old. As a puppy her muzzle was a deep chocolate color, appearing as if she had dipped her entire snout into a pot of chocolate. The name stuck and over time it was shortened to just Chocolate.

Her story, although tragic, could have had a much worse ending. W.O.L.F. received a phone call from a distraught individual who was trying to find a home for nine puppies and their mom, Kodiak. The family who owned them was being forced to move and could not find another home that would allow animals. They had contacted the humane society and been told that all wolf dogs that are surrendered by their owners are automatically euthanized.

We could not say no to these helpless, seemingly doomed animals. We accepted all ten animals and observed them closely as they grew to determine whether or not they could be adopted out to families. We ended up placing five of the puppies and keeping the other four pups and their mom.

They were all placed in an enclosure with Sasha, an alpha male, who adopted the pups and became their patient yet insistent co-instructor along with Kodiak, their mother. While many of the lessons the pups learned were harmless and light-hearted, one of them resulted in an almost catastrophic event. When the pups were eight months old, Kodiak decided it was time for them to learn how to hunt. Unfortunately, the only animal around for them to practice on was Xavier (another wolf dog at the Sanctuary). Also unfortunately, the training exercise occurred while there was no one at the facility. When Xavier was found, he was very close to death and immediately rushed to the CSU Vet Teaching Hospital where he recovered for three weeks.

When Chocolate was almost thirteen years old, she began losing weight and having horrible bowel problems. Our vets examined her and concluded that she had some sort of tumor or GI cancer. We did not feel a major surgery or stressful treatment was in her best interest at her age. The GI problems were treated with drugs and supplemented with painkillers for many weeks. She seemed comfortable and content for a while. One Sunday morning, Chocolate was noticeably in pain, would not eat, and could not get comfortable. We gave her painkillers, but it was very clear she would not recover. The vet came to assist her passing, which was calm and peaceful.