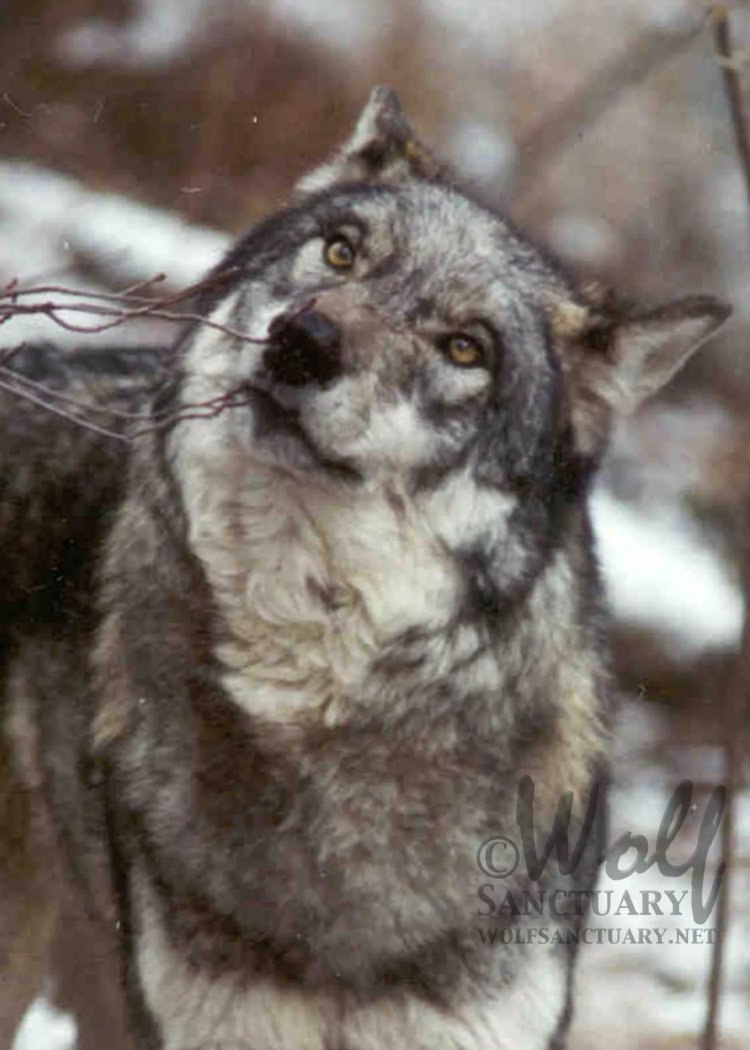 Female
Born: May 1993
Rescued From: South Dakota
Given Sanctuary: June 25, 1998
Returned to Spirit: April 18, 2002
Our animal stories always seem to start with a phone call to W.O.L.F., and it was no different in Cheyenne’s case. This time the call came from an employee of the Colorado Division of Wildlife who was acting as a private citizen putting out a call for help. He and his wife were caring for an injured wolf named Cheyenne. She was born in South Dakota at Bear Country USA and sold to a commercial wildlife photography studio in Colorado. Cheyenne had almost been killed when a caretaker had placed her in an enclosure with a new pack. We agreed to take a look at her to see if she would fit in with any of the packs already here at W.O.L.F.

Expecting to find a beautiful wolf, we found a patchwork quilt instead. Cheyenne had fur missing in patches all over her body, her nose looked as if it had been put in a meat grinder, and she was absolutely terrified. The care this kind couple were giving Cheyenne was wonderful, but because of where they lived Cheyenne had to be kept in a small 6’x6′ kennel in their barn. Between the trauma of the attack, the physical illness brought on by the incident, and the fact that she could not escape into a quiet corner away from people, Cheyenne was not doing well. The veterinarian working with Cheyenne thought that she might have to be euthanized because in addition to the wounds she had suffered, her liver was possibly failing. We agreed to take Cheyenne and try to nurse her back to full health.

After being delivered to W.O.L.F., Cheyenne was placed in the holding run where she could be treated and yet get away from humans. As time progressed and her health continued to improve, she was placed in a permanent enclosure with Bear, Spirit, and Cherokee. The animals appeared to bond well with each other. All went well until Bear decided he no longer wanted Cheyenne and Spirit living in his pack and drove both of them off. In an effort to restore peace, Cheyenne and Spirit were placed in an enclosure of their own.

Although Cheyenne’s uterus had been removed, she began exhibiting some vaginal bleeding. Every year there would be a two to four week period when Spirit would be very protective of her. He would not let her visit with humans and generally did not want humans in his enclosure. We decided to check on the bleeding. It turned out that whoever had done the original surgery to remove Cheyenne’s uterus had missed a small piece. At the end of the procedure, as she was taken off of the isoflurane, Cheyenne stopped breathing. The vet and vet techs worked relentlessly for two-and-a-half hours trying everything they could to bring her back. Although epinephrine, atropine and steroids were administered, her heart rate never changed. Then her heart stopped — she was gone.