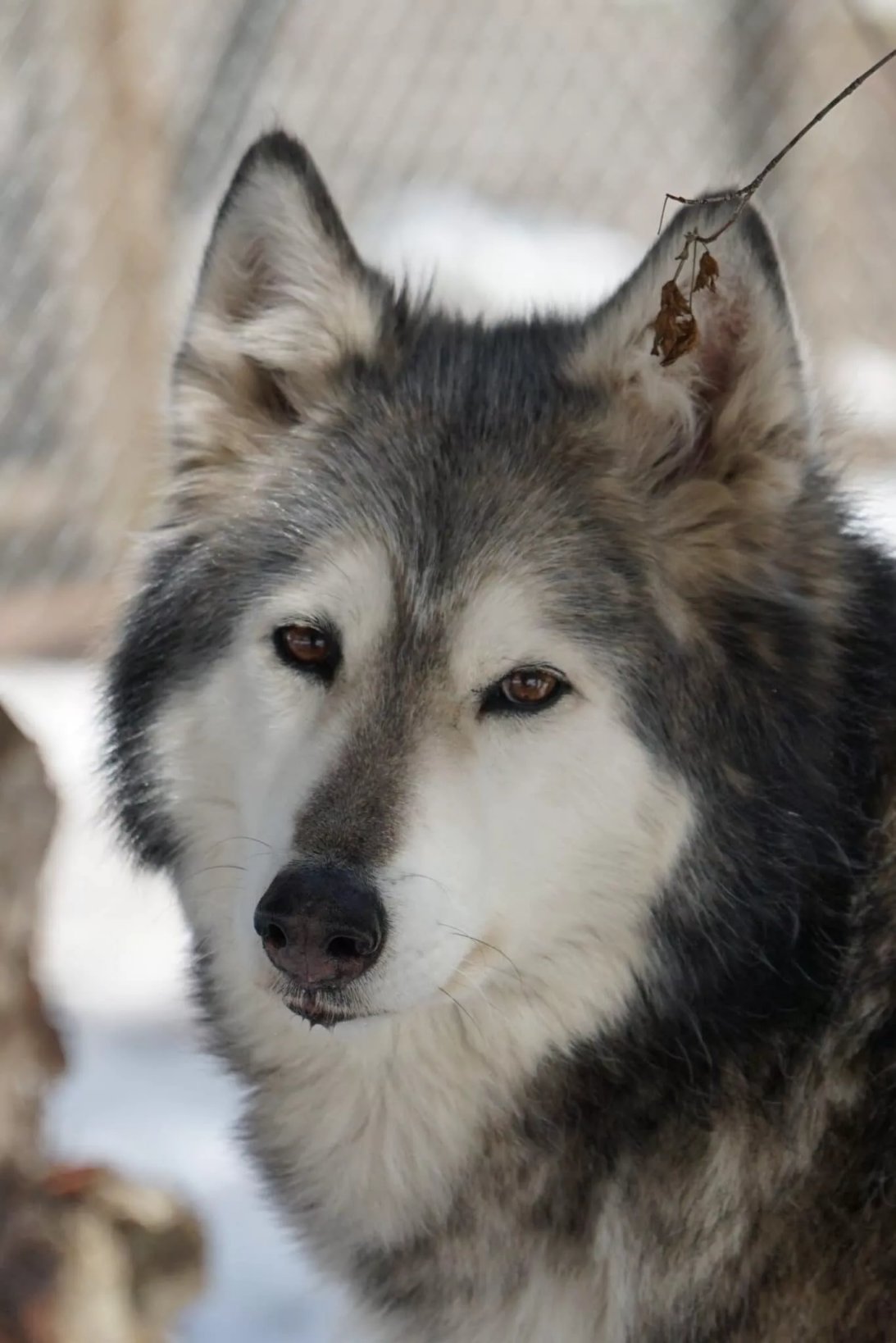 On June 29, 2013, we witnessed one of the quickest adaptations to the Sanctuary we have ever seen when Bella Roux, our constantly smiling and vocal new resident, arrived from Oklahoma. Her comfort in her new surroundings was immediate. This made little sense in one respect, and total sense in another.

Bella Roux’s life began in Alaska, and her first year and a half of life was spent virtually 24/7 in a small kennel, being let out (and physically beaten to keep her under control) once a day. Neighbors took her from this environment and turned her over to the local humane society. Her new adopted family moved to Oklahoma from Alaska and next four years was a far cry from the old environment, but it did not last. What unfolded was an unsafe home experiencing domestic violence, and her human Mom called the Sanctuary for help.

It appeared she might be a good match for Rajan, who recently lost his companion Kiki. Arrangements were made to bring Bella Roux from Oklahoma City to Kansas, where staff picked her up and brought her home to W.O.L.F.

Her introduction to Rajan and her new enclosure was swift and heart-warming. Rajan quickly went from king of his castle to her majesty’s attentive companion. Bella Roux has blossomed in spite of her hard life. She became an ambassador and joined Rajan on educational programs in the community. She and Rajan became one of the Sanctuary’s super couples. Bella and Rajan could always be counted on to welcome staff and volunteers to their enclosure. The two were amazingly happy and stable.

When Rajan passed away in 2018, Bella was bereft. W.O.L.F. gave her the time she needed to grieve, and then introduced her to a young pup named Zakai. Bella was not interested in Zakai and immediately rejected him. She made it clear that she did not want to raise a pup. Staff and volunteers were beyond surprised at her choice but honored the wishes of the beautiful Bella. Instead, she was placed with Castiel as a companion. Bella and Castiel took some time to adjust. Castiel was far more interested than Bella, who remained aloof for a time. However, over the weeks, the gentle and quiet Castiel won the affection of the outgoing Bella. They became good companions and enjoyed life together. It was heartwarming to watch as Castiel grew more confident with the help of his highly social companion. Bella remained very social with her human visitors and always enjoyed their company.

During the evacuations due to the Lewstone Fire and Cameron Peak Fire in the summer and fall of 2020, Bella seemed to be her normal self. She reveled in attention from her caretakers and enjoyed being hand-fed her meals while she and the other residents stayed in their temporary enclosures at The Wild Animal Sanctuary. On November 7th, when the animals returned home to W.O.L.F., caretakers delighted in watching Bella and Castiel play and frolic as soon as they were released back into their home. This made it evermore shocking to discover Bella Roux deceased in her habitat on November 9th, less than forty-eight hours after her return to W.O.L.F. Staff discovered that Bella, who had seemed perfectly content the day before, had passed away sometime during the night. She was submitted for a necropsy to determine what had caused her sudden and unexpected passing. The results indicated that her long-term gastrointestinal issues were the cause of her passing.

While it causes enormous grief to lose the beautiful and affectionate Bella, we take comfort in knowing she has once again rejoined Rajan, who was undoubtedly the love of her life. We know that they are together again, getting into playful wrestling matches, eating the few delicacies that their picky palates desired, and basking in the companionship of one another.