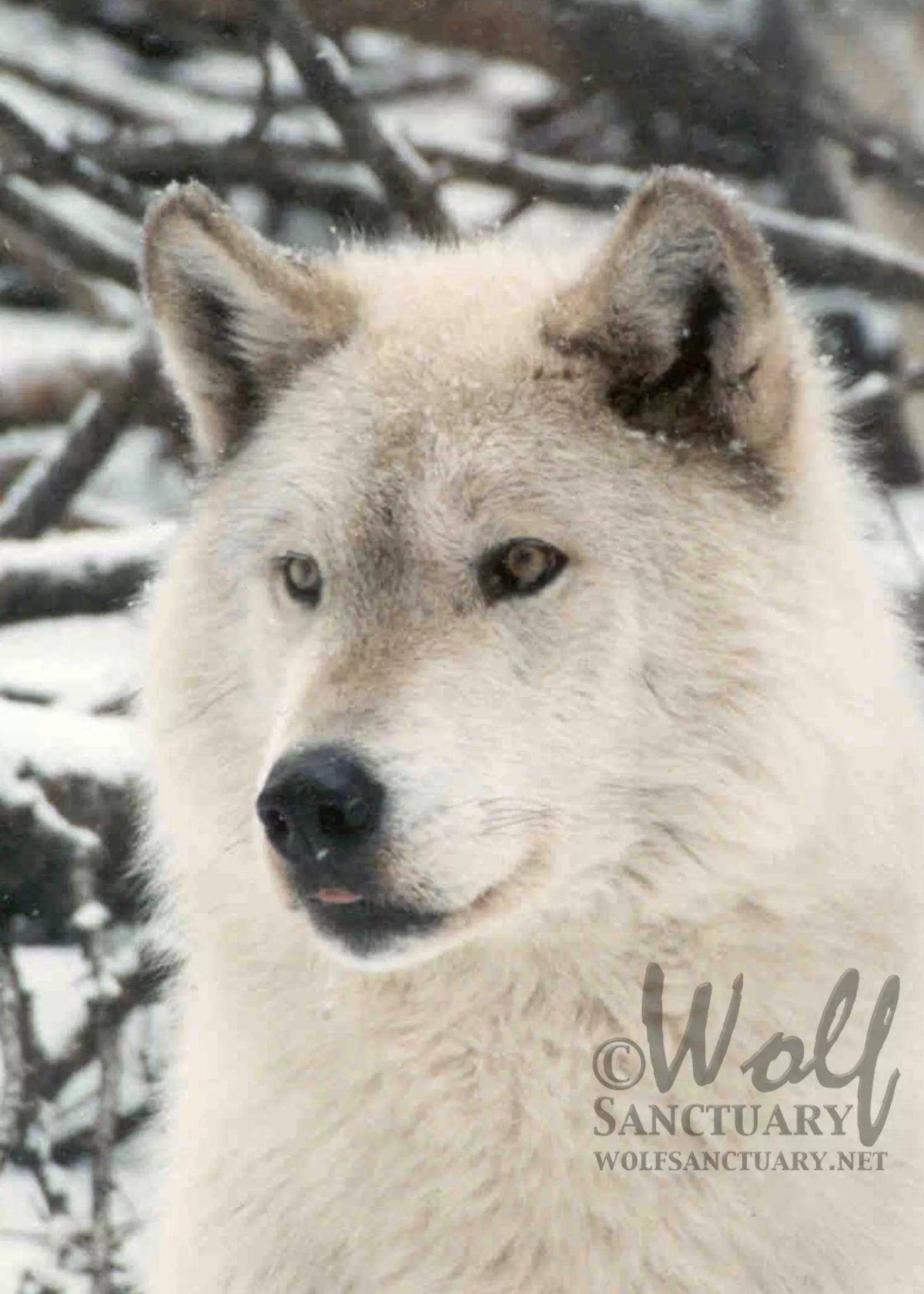 Male
Born: March 6, 1992
Rescued From: Colorado
Given Sanctuary: April 12, 1998
Returned to Spirit: September 22, 2002
The local SWAT Team had been called to destroy Bear. He had several strikes against him as an escape artist, and several complaints had been filed against Bear and his owner. Fortunately, Bear’s owner found him just in time, and the police allowed her to tranquilize him and bring him to W.O.L.F.

The biggest concern about Bear after his arrival at W.O.L.F. was a large growth on his left knee. The Sanctuary’s veterinarians were called in to examine him and as the surgery progressed everyone was shocked to discover that the growth was actually a fluid sack filled with dead white corpuscles and the slug from a 9 mm bullet. Although it was devastating to know that Bear had been shot, it was a relief to know that he did not have cancer.

Bear was placed in a full-sized enclosure with Cheyenne, Spirit, and Cherokee. His physical injury healed beautifully, and he initially bonded well with all of the animals in his enclosure. Bear became very dedicated to Cherokee, who was still a pup. One day, Bear decided that he no longer wanted Cheyenne or Spirit in his enclosure, and they were moved to an enclosure of their own.

As if there had not been enough trauma in Bear’s life, in the spring of 2000 there was a forest fire close enough to the Sanctuary that all of the animals had to be evacuated. Everyone was safely evacuated and returned, but Cherokee passed away from complications related to stress one day later. Bear started to grieve for the loss of Cherokee and everyone at the rescue became concerned for his life.

After several weeks of allowing Bear grieve, it was decided to place Kiki and Matoskah in with the sad white wolf. Both of these animals were still considered pups as far as wolves were concerned, and we knew that Bear loved pups. True to the nature of wolves, Bear accepted Kiki and Matoskah as his own.

On the morning of September 22nd, the co-founders heard a strange, faint cry coming from the direction of Bear’s enclosure. As they looked through the trees, they saw Matoskah biting the back end of Bear, who was on the ground and not moving. When they reached Bear, they discovered that he was no longer breathing. He had been fine the day before, exhibiting his usual dominant behaviors. After hearing the circumstances of Bear’s passing, the vet concluded that he had most likely experienced a stroke and died very quickly. Although his passing was unexpected by us, the vet clarified that as large as Bear was (155 lbs.) and as old as he was (10 ½ years), he had lived a full life.